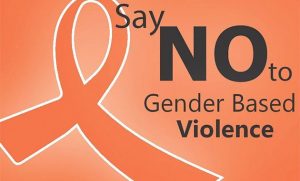 The Sixteen Days of Activism Against Gender-Based Violence is an international campaign which runs annually from 25 November to 10 December.  But why 16 days? 25 November is International Day for the Elimination of Violence Against Women and 10 December is Human Rights Day. The sixteen days are derived from the number of days in between the two important days. Women’s emancipation campaigns routinely emphasise that women rights are human rights so for the campaign to culminate in Human Rights Day is highly significant.  The sixteen days campaign aims to throw light on the scourge of violence against women and reinvigorate efforts and galvanise support to end violence against women and children around the world. The campaign started in 1991 and was a brainchild of the Women’s Global Leadership Institute. Since 1991 the campaign has been commemorated annually by women and human rights organisations in at least 187 countries.

Notably, the sixteen-day period also encompasses other commemorative days which are relevant to the cause such as World AIDS Day on 1 December and International Women Human Rights defenders day on 29 November. In Zimbabwe, it also encompasses the National Tree Planting Day which is held annually on the first Saturday of December. This year Veritas Women will incorporate the day into its 16-day awareness activities. Veritas will plant trees in memory of Zimbabwean women who lost their lives or were injured and maimed because of gender-based violence. Violence against women leaves visible and invisible scars to the women and the community around then so planting memorial trees is seen as a unique, powerful and sustainable tool against GBV. Different things are done to support the campaign such as donating money and a time to assist victims with medical assistance legal aid and other forms of practical help. Women victims often need shelter for themselves and their children.  The traditional way of supporting the 16 days campaign is to wear a little white ribbon but more practical support can be given where possible. In 2018 the Swedish Embassy in Zimbabwe supported a poster campaign which featured prominent Zimbabwean men and celebrities boldly declaring themselves to be feminists and condemning violence against women.

Gender-based violence takes many forms the chief of which is physical violence against women particularly rape and assault.   Rape culture is particularly entrenched in Zimbabwean society. The Zimbabwe Gender Commission reports that 22 women are raped every month in Zimbabwe. The United Nations reports that 90% of women do not report rape therefore the official statistics are not reliable. There are certainly more rape cases than are known and tabulated. The United Nations theme for this year and running for the next two years is ‘Orange the World Generation Equality Stands Against Rape’ This is in recognition of the need to pay special attention to fighting the culture of rape that is prevalent in so many societies and cultures.

The Domestic Violence Act lists many other acts apart from rape and assault that fall under the ambit of domestic violence. Any unlawful act, omission or behaviour which results in death or the direct infliction of physical, sexual or mental injury are acts of domestic violence. GBV acts against women include physical violence, sexual abuse, emotional, verbal and psychological abuse, economic abuse, intimidation, harassment, stalking, malicious damage to property, forcible entry into the victim’s private residence. It is common for one partner usually men to drive the other partner away from the house or impose restrictions to their access to household facilities by changing locks, locking them out or physically chasing them away. This is against the law no matter the reason and regardless of the other partner owning the shared house. Unilaterally disposing of the matrimonial home and household assets in which the other party has an interest is an act of domestic violence which can be legally contested.

Religion and culture are often accessories and accomplices to violence against women. Harmful cultural and religious practices that violate women’s human rights and dignity are unlawful. The Domestic Violence Act specifies harmful cultural practices like virginity testing, female genital mutilation, pledging of women or girls for the purposes of appeasing spirits or forced marriage or child marriage or forced wife inheritance or sexual intercourse between fathers in law and their daughters in law as is reportedly done in some cultures. All the different forms of domestic violence lead to social and economic deprivation for women such as fewer career advancement opportunities and access to material resources at home and in the larger economy.

Zimbabwe has relatively robust legislative mechanisms to deal with gender based violence. The Domestic Violence Act, the Constitution and the Criminal Codification and Reform Act together provide legal remedies for victims and punishment of offenders. Dedicated courts and registries in Civil Courts have also been established to deal exclusively with Domestic Violence cases. Victims are encouraged to pursue legal remedies and protection and avoid settling cases at domestic level. This is common in cases of rape and abuse of minors where the perpetrators and victims are related. Victims themselves particularly women usually undermine their own cases and the course of justice because they usually withdraw charges before trial. This is done to protect husbands and boyfriends or because of pressure from family members. Some women also fear reprisals from the men or the fear of loss of livelihood if the man is the breadwinner. Premature withdrawals by victims result in the majority of Domestic Violence court cases crumbling because it is difficult for prosecutors to proceed with the criminal trials. The Domestic Violence Act provides for protection and prescribes various forms of relief for victims.  Section 80 of the Constitution specifically provides for the rights of women and protection of their dignity and worth as equal human beings.