There is one very pressing - not to mention, extremely embarrassing - question which Zimbabweans who travel throughout the world are always confronted with every time we encounter foreign nationals: "Why are you people so docile and placid, such that you hardly stand up against the suffering and oppression you endure at the hands of your government? Are you so cowardly?" 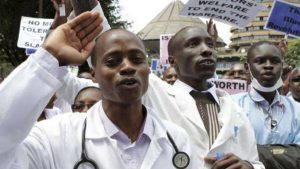 How can anyone answer that without appearing like a fool? We try to explain that what we are dealing with here is a regime with a grave history of brutality and tyranny, which does not tolerate any form of dissent – coupled by examples of the August 2018 and January 2019 killings, as well as intimidation and alleged abductions of opposition and labour activists. We do our best to make them understand that, it is not that we have never tried to stand up for ourselves, but each time we have been met by a gruesome and heinous response at the hands of a heavy-handed force, such that most people had finally decided to just quietly try to make ends meet – under such arduous and perilous conditions – without provoking the ire of the administration.

However, such a response never seems to invite much sympathy nor empathy from those in foreign lands – but, instead attracts biting scorn and ridicule – as they merely view these explanations as nothing more than lame excuses for our own cowardice.

They are quick to point to their own peaceful and non-violent, but fearless and gallant struggles, against similar – if not more vile and ruthless – regimes, as they firmly stood up against injustice and oppression, in the face of numerous precarious challenges, including brutal repression, most of which resulted in unfair imprisonments, barbarous crackdowns, beatings up, intimidations, and even the loss of lives.

Nonetheless, the people persevered and prospered, as their painful struggles were eventually rewarded by a better system of governance that truly had the desire for the ordinary person on the street at heart.

So, what is the Zimbabwean’s excuse?

However, what we find encouraging is that the winds of change are finally blowing across the nation, as witnessed by the pioneering and trailblazing bravery of doctors, who have categorically and outrightly refused to be intimidated – in spite of the recent alleged abduction of their leader Peter Magombeyi by people who have not been brought to book, as with all other similar cases, in addition to reports of threats from unknown individuals.

As the state president once ‘advised’ the South African government during the recent xenophobic violent riots – that all Pretoria needed to do was just fire one or two shots into the air, and these people will scurry in all directions.

Our leaders truly know us! Zimbabweans have been notorious for our lack of backbone, and gullibility.

However, our doctors – who have not been reporting for work for the past two months, citing incapacitation due to their paltry earnings – have proven to be a different breed, as they have refused to yield in the face of a recent labour court ruling declaring their collective job action illegal, and have also not been shaken by subsequent disciplinary hearings, and not so covert threats by the government to fire them.

They have stood boldly and firmly in their demand for a living wage – in fact, merely demanding today’s equivalent of their salaries as of October last year, when these were valued in United States dollars, before the government legislated that the ever-devaluing Zimbabwe dollar was now the only legal tender in the country.

Numerous insincere and deceptive ‘negotiations’ have been called for by the government – all of which have proven to be a sheer waste of time, as their employer has offered nothing near the real value of the doctors’ real salaries based on the prevailing interbank exchange rates.

Such an example by our doctors of what it truly means to boldly and valiantly stand up for one’s rights needs to be emulated by each and every Zimbabwean citizen who genuinely desires a better life for him or herself, and their families – contrary to what we have witnessed in the past whereby a simple threat to sack aggrieved employees, or imprison and beat up peaceful demonstrators clamouring for their rights, have worked wonders in filling the people with unparallelled fright and nightmares that they have cowardly put their tails between their legs, and surrendered their cause.

On top of that, other seemingly resolute employees – frothing at the mouth, and vowing not to return to work if their demands were not met – have meekly capitulated when another round of ‘talks’, in a stream of countless useless negotiations, has been called for by their employers – an obvious age-old ploy to disable their industrial action.

Nevertheless, we now have an enviable precedence to emulate, in the form of our doctors’ actions – as we have finally learnt as Zimbabweans that we need to stand together without an ounce of fear in this struggle for a just society – where there are no people, especially in the ruling elite, who should be regarded as most equal than the rest of us.

This country belongs to all of us, and we should make our message unequivocally clear to those in authority that the time for treating us as second-class citizens, and less human than they are, is over! We demand immediate recognition of all the people of this country as worthy of respect, honour, and dignified life.

We can not spend the precious lives that God Almighty gave us – due to His unending grace – trying to figure out where and how we will get money for our next meal, our children’s school fees, and rental for our dwellings; or standing in queues trying to fetch water from the suburb’s solitary borehole; or cutting down trees for firewood because there is no electricity; or worrying about the future of our small businesses as people do not have disposable cash to spend on our goods and services; or watching our loved ones perish due to the unavailability of medication in public health centres (and their unaffordability at private pharmacies).

Yet, our leaders – mislabelled as fathers and mothers of the nation – extravagantly waste the resources meant to benefit all of us, on chartering private jets on largely pointless trips, seek medical treatment at the most expensive hospitals overseas, reportedly blow over US$5 million staying in five star hotels, ostensibly attending a pre-budget meeting, waste another US$4 million on a useless anti-sanctions march, and loot billions more through systematic corruption.

What type of a father or mother does that? What manner of a father or mother goes out revelling – partying, drinking and eating – whilst, his or her family wallows in poverty – without food to eat, clothes to wear, going to school, dying for lack of medication, or without a roof over their heads?

Is this not abuse of the highest order? So, what can we say about our own leaders – for lack of a better word, for surely they are anything but leaders?

We now need to speak loudly and boldly in demanding our rights to be respected – without allowing fear to emasculate us…for bravery is not the lack of fear, but the ability to move ahead, in spite of the fear.

Doctors have already shown the way for us. Even if we are fired from our jobs – such is the cost we will have to pay as an investment and premium for a better future, where we will have a better economy and better jobs. So what if we are brutalised in the midst of our peaceful cause for a dignified life – for such is the sacrifice worthy of any future deserving of a God-created human being.

Even those who came before us knew that, in their fight against colonial Rhodesian injustices and oppression, there came a time to sacrifice everything for the sake of a better future – although, that gallant struggle was eventually hijacked by the power-hungry and corrupt caboodle we have today, who disingenuously and deceptively claim the glory.

Ours is a peaceful and non-violent, but highly effective, loud call for those in power to finally realize that they have an obligation towards the people of this country, which they can not afford to ignore any longer. This is a struggle that is far much larger than just you and me, as individuals, but requires solidarity and unitary effort as Zimbabweans – transcending any narrow and shallow political divides – for indeed, united we stand, divided we fall.