As a son of a teacher, I will never forget the utmost honour and pride attached to this profession in the 1980s - such that, even as a mere child, just being known as "Mr. Mbofana's son" made me walk with my head held high, as I was treated with great respect by both young and old within our community - something that made me also regard my father as some sort of a hero. 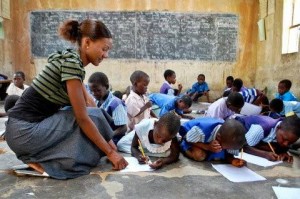 Little did I know that only a couple of years down the line, this same profession – which was arguably only comparable to lawyers and doctors – would be turned upside down by a callous government, that clearly never values the immense contribution that teachers make not only to the development of every man, woman, and child but also to the prosperity of the entire nation – as these are the cornerstones and bedrocks of the highly educated population that this country boasts of.

As the country’s leaders gloat on various platforms on how Zimbabwe has the highest literacy rate in Africa, and products of its education system are renowned globally, one would be excused for assuming that our teachers would be the most valued and respected people in the nation – yet, what we so hurtfully and sadly witness is that they have been shamefully belittled and emasculated by these same leaders.

In Zimbabwe, the teacher – who used to carry such an influential and powerful role in the community – has been catastrophically transformed into the lowliest regarded and demeaned member of society.

In spite of the fact that these gallant men and women put so much extra work into ensuring that our children are well-educated, well-prepared to tackle the challenges of the real world, well-rounded members of society, and well-equipped for the development of the nation – our government appears to think otherwise, and not to care at all.

I remember growing up with my father spending most of the free time we should have had together as quality family time, engrossed in either marking his pupils’ exercise books, planning for the following week, month or term’s work, or practising his music pieces (as he was also the senior school choirmaster). I, however, never felt abandoned nor neglected, but actually felt a sense of glowing admiration and immeasurable pride in him for such invaluable sacrifice and dedication to duty and work ethic – something that I highly regarded, and resolved to adopt for my own life.

To me, and the community which held teachers in high esteem, these people deserved a place of honour similar to medical doctors – as without such people, a nation could never hope to survive in a civilised and modernised global village.

In the 1980s, indeed, their welfare appeared to have been a true reflection of their venerated station in life, as their salaries enabled them to adequately provide for their families, send their children to very good schools, purchase lovely homes in low-density suburbs, and even afford to take their families out for memorable holidays.

Yet, in less than 40 years of Zimbabwe’s independence, the government has managed to do the unthinkable, by turning these heroes and heroines – who have made all of us the highly educated and capable people that we are today – into virtual paupers.

As a result of the cannibalistic nature of this regime, teachers have been sucked dry, devoured, and humiliated into the laughing stock of the communities that once revered them.

No longer can they own their own properties, but have been reduced to lodgers – even being tenants at their own pupils’ parents’ homes. Something that clearly strips teachers of all respect, as the children now regard themselves, no longer as pupils, but little landlords.

What could be more degrading than your child’s teacher failing to pay rent, and having to either beg for clemency or being booted out of the lodgings?

Teachers now have to beg for money to meet even the most basic of necessities – with some of their own pupils having more pocket money than they (teachers) have to meet their daily expenses.

Who can not feel empathy for teachers, as they are now some of the most depressed professionals in this country – highly prone to such tragic incidents as strokes, as they have nothing to show for their hard work, sacrifice, and contribution to this nation?

How can a teacher perform his or her duties at their optimum when they have – gnawing at the back of his or her mind – the persistent thought that, whilst they are busy teaching other people’s children, they can not even afford to send their own to school?

Similarly, teachers who used to marry other professionals as doctors and lawyers, have been drastically reduced in stature that they find it hard to marry even within their own ranks – in fact, their divorce rates have reportedly increased.

As teachers’ desperation intensifies, a large number has been forced to seek so-called ‘greener pastures’ outside the country, where they have been met by horrendous challenges, as work opportunities in the same field have been hard to come by – thereby, leaving them even more vulnerable.

Notwithstanding these tribulations facing today’s Zimbabwean teachers, the same government that has overseen their degradation and ‘lowering of standards’, has been at the forefront of demonising them as ‘enemies of the state’, whenever they have sought to clamour for their rights.

Teacher union leaders have been vilified by the same people who should actually be ashamed and held accountable for the sorry and deplorable state our teachers find themselves.

Teachers who have sought to engage in lawful and constitutional collective job action have been threatened – with some leaders reportedly being abducted and beaten up – whilst, officials in the education ministry – themselves victims of the same government’s impoverishment – have been used as guard-dogs and house-slaves for those in authority.

The government has even gone a step further with its charade of ‘working hard to improve the welfare of teachers’, by offering them nonsensical ‘non-monetary incentives’, such as duty-free importation of vehicles – yet, a teacher does not even earn enough to purchase a vehicle, in the first place. So, where is the sense in allowing a teacher to import, duty-free, something he or she can not even afford to buy?

Additionally, as much as they may desire to start their own income-generating projects, this remains a mere pipe dream, as teachers simply do not have either the land or the money.

This then becomes a ‘Catch 22’ scenario, whereby teachers find themselves trapped between a rock and a hard place.

Which leaves them without much of a choice than to think outside the box, by engaging in such projects, as writing books, or utilising any other skill that they may have taught their pupils, for income generation…something that is obviously easier said than done, as teachers have been gravely incapacitated and disenfranchised by this government.

What manner of a government would destroy the very backbone and mainstay of the country’s development and prosperity by emasculating its own teachers – effectively depriving current and next generations the bright future they deserve? I am sure a government that has no qualms whatsoever with leaving its ailing population to die, by recklessly firing hundreds of similarly disadvantaged doctors – who are also crying out for a semblance of a decent and dignified life – has no problem at all even if the nation and its children are effectively destroyed.

Teachers and the people of Zimbabwe at large find themselves faced with not only a government that has failed to improve their wellbeing but one that seems intent and determined to destroy the very life out of them. Otherwise, how else can anyone describe this brazen cruelty and hard-heartedness? As much as it fills me with sorrow that my father is no longer alive today, but on the other hand, I am glad he is not here to witness how his most beloved and treasured profession has been mocked, abused and cannibalised by this government – something that would have most certainly killed him, had he been still alive.