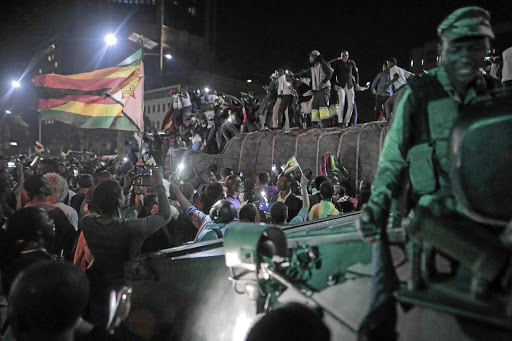 On November 14 2017, Zimbabwe’s army pulled off a brazen operation: it seized President Robert Mugabe and his family, placing them under house arrest. A week later, on November 21, a frail-looking Mugabe announced his resignation. It was an ignominious end to a decades-long reign.

Ordinary Zimbabweans celebrated. For many, Mugabe was the cause of the country’s economic ruin. In the euphoria of the moment, thousands of jubilant citizens gathered in the capital, Harare. They embraced and took selfies with soldiers — heroes who had brought down the autocratic regime.

Fast-forward two years, and Zimbabweans are again grappling with a crisis.

Many rue the decision to support the coup.

“We were used,” says Eric Mubako, who works for a large wholesaler. “They got what they wanted — Mugabe out of office.”

Felix Kabango, a book vendor in Harare, expresses a similar sentiment. “The coup has brought us more suffering … People who have normal jobs don’t earn a decent living,” he tells the FM. “Samp is the new rice in town.”

Informal trader Washington William also expresses frustration. “Things have plunged to new [lows],” he says. “Electricity is expensive, water is not available … transport is too expensive and money is hard to come by.”

Not everyone is convinced of the severity of the situation. Zanu-PF supporter Farai Marapira, for one, believes President Emmerson Mnangagwa’s government simply needs more time to turn the economy around.

“Our economy couldn’t [recover] without some fundamentals being addressed,” he explains. “Chief among these was the perennial budget deficit. This was the main issue that caused austerity [measures] to be introduced. Now, ahead of time, austerity is over.”

Upon taking office, Mnangagwa sought to break with Mugabe’s ruinous path, launching an open-for-business policy — an invitation to foreign investors to invest in the country. Under Mugabe, the doors had been shut to investors owing to, among other things, indigenisation legislation that compelled investors to cede controlling equity stakes in businesses, and general disregard for property rights. Mnangagwa pledged to institute political reforms and do things differently.

But the wheels have since come off.

Just last week, finance minister Mthuli Ncube said the government would fall short of the targets in its turnaround programme.

“Refraining from unbudgeted activities and borrowing from the central bank will, therefore, constitute a key obligation for both Treasury and the central bank authorities from 2020,” he said.

Zanu-PF spokesperson Simon Khaya Moyo says the government has been hobbled by problems beyond its control, including drought and sanctions the US and EU imposed on dozens of Zanu-PF members and affiliated entities in 2001. These, he says “block lines of credit for the country”.

But Kipson Gundani, CEO of Africa Roundtable, says that while Mnangagwa inherited some economic problems, his administration has contributed to the downturn. “If you look at the level of money creation since [Mnangagwa] took over, you’ll realise this is a function of the Mnangagwa regime alone,” he says by way of example.

Gift Mugano, an economics professor at Zimbabwe Ezekiel Guti University, believes the economic reforms were doomed to fail because they were implemented without a “supporting institutional framework”.

“Zimbabwe was trying to model its reforms around Rwanda,” he says. “Rwanda has the Rwanda Development Board, and here they were trying to have the Zimbabwe Investment & Development Agency — and that has not taken off, two years later.”

But it’s not just a faltering economy that’s battering the government’s image. The same security forces who posed for selfies with the masses two years ago have come under fire for human rights abuses.

For the moment, the security forces seem to be well protected. In his 2020 budget, announced last week, Ncube said the ministry of defence & war veterans would be allocated $3.1bn — the single largest line item.

Given the economic downturn, it may be a necessary move for Mnangagwa. “You can’t starve your boss,” political scientist Innocent Ncube told the Sunday Times this week. “A happy army is a cushion for rulers, especially in a country where there has been a fresh coup.”