Suprise—an elephant appears to the right. (Courtesy of Kevin Revolinkski) DESTINATIONS “No matter what, you stand your ground. You are the apex predator.” Our guide, Julian Brookstein, stood before us dead-serious, the butt of his bolt-action safari rifle resting on one boot. The six of us cast wary glances at the brush around us. Stay in single file, directly 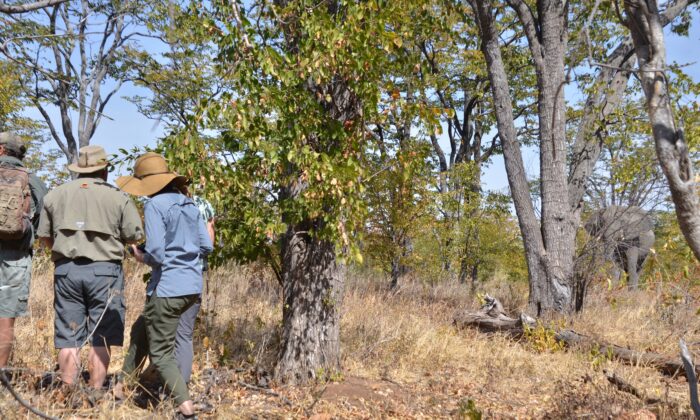 “No matter what, you stand your ground. You are the apex predator.”

Our guide, Julian Brookstein, stood before us dead-serious, the butt of his bolt-action safari rifle resting on one boot. The six of us cast wary glances at the brush around us. Stay in single file, directly behind him; do not fall behind or get spread out; walk in silence.

There were no fences, and in a few minutes, we’d lose the sanctuary of a nearby safari jeep as we ventured out into the bush on our first walking safari.

Such an activity sounded insane to me, and when Charles Slater, the safari planner who organized our trip, insisted I try it, I have to confess I had misgivings. I’d seen Slater’s own photos of a wild bull elephant’s face filling his lens, and heard his description of it towering over him. That sounded like the moment before the climax of a “what-was-he-thinking?” story. I double-checked the fine print of my travel insurance, and sure enough, walking safaris are covered, even under just the basic policy.

Twenty minutes later, we realized just how much bigger an elephant is when your feet are on the same dirt hers are. In the scrappy trees, 100 feet away, she was heading directly toward us, leading a small herd with a few babies among them. The females aren’t to be trifled with, but her poor eyesight meant she hadn’t yet discovered us. Brookstein, noting the presence of young, reversed direction—quickly, but without drama—and led us off a distance, where we stood to watch them emerge from the trees into a sandy plain.

“Just wait. She will smell us,” he said.

She was two steps out of the brush when she stopped dead in her tracks. An unheard signal was made and in unison, the whole herd turned and moved back into cover.

Traveling as a group of six friends, we had landed at the international airport in Victoria Falls in western Zimbabwe. The first day, we stood drenched in rising spray, looking down into the impossible depths and breadth of the thundering falls along Zimbabwe’s border with Zambia. The next morning, we took a shuttle to Robins Camp, a collection of simple but nice chalets at the heart of the largest of the nation’s national parks, Hwange, a 5,657-square-mile beauty. This is where we met the professor of the jungle.

Brookstein, a licensed walking-safari guide with an impressive depth of knowledge about anything we encountered, had only recently gone independent, quitting from a larger safari company. But fortunately, Slater had known him from previous trips and booked him directly for ours. Whether it was a lion or a termite’s nest, Brookstein would wait for us to get our photos and then the lecture would begin.

In the jeep, we came upon two hyenas howling up at the gory remains of an impala lodged in a tree by a leopard. He turned and sat on the driver-side door to tell us a story of hyenas—of their habits and behavior, of the matriarchal society, of the queen and her privileged daughter, of the fall of that queen and the brutal retribution upon her descendant by those who had previously given deference. It was a telling at once of scientific study and a tale of political intrigue.

Our first day of safari, we saw what must have been two or three herds of elephants—at least 80 of the noble beasts—trekking together through dust and Zimbabwe’s equivalent of fall colors, rattling orange and rust leaves of June that appear with the cooler nights of winter.

One has to look a bit here to find the animals; but then, it felt more like reality than the almost exhibitionist game parks of South Africa or Botswana. Up before the sun, we donned insulated parkas in the 50-degree chill and rode along in an open Land Cruiser on two-track. Brookstein stopped at concrete crossroads markers where the cheetahs like to climb up and scat-mark territory. Many of the droppings were fresh but it took a couple of days before we finally saw one of the graceful cats. Estimations claim there are fewer than 200 cheetahs in Zimbabwe, most of them within three primary wildlife preserves, of which Hwange is one. On our third morning, we spotted not one, but two males. They moved off right away, but one paused to look back over a shoulder at a jeep full of gaping human mouths.

Unlike the instant gratification of more popular and more crowded parks, there was heightened joy in the exclusive event as if we’d earned it. All along the way, we came across zebras, antelope, giraffes, baboons, and even a pride of lions with playful cubs. We sneaked out of the vehicle and up the steps of a blind overlooking them where they lounged by a watering hole. But Brookstein has brought groups right up to them on hiking occasions, and has retraced his steps in the bush to find fresh lion prints over his own.

Brookstein reassured me, “Zimbabwe is actually one of the safest destinations to do walking safaris in Africa. Obviously, we are walking in areas that contain big, dangerous animals. However, Zimbabwean professional guides are the most qualified on the continent to do it.”

Twice a year, would-be guides sit for two-hour exams in habits and habitat, firearms, hunting and guiding laws, and a general test. When all four are passed, the applicant gets a learner’s license and must pass a first-aid course and exam before being allowed just to guide from a vehicle. An apprenticeship with a professional guide follows, lasting three to four years. Then follows a marksmanship exam at a shooting range, an advanced emergency aid exam, documented hunting skills experience, and finally a letter of recommendation from a mentor.

Finally, you stand before an examination board of experienced guides for up to an hour of questioning. Julian said, “The words you want to hear are, ‘We would like to invite you to proficiency.’” This is a weeklong exam, wherein the applicant sets up and runs a bush camp for two examiners, who test them around the clock on everything from camp cooking to confronting a dangerous animal.

Standing in a seasonal river bed, Brookstein held up a piece of elephant dung to our bemusement and pulled it apart to reveal a mass of leaves no different from the ones on the trees. He explained the six sets of teeth adults wear out over a lifetime and told us this was the result of the ineffective chewing of a 60-plus-year-old pachyderm. We learned this and not 10 minutes later down the road, we could then spot similar droppings.

Brookstein praises this as evidence of a working park system: Old elephants. On one of our hikes, we came across an entire skeleton strewn among the dust and straw-like grasses. He pointed out the half-worn sixth set of teeth in the skull and we hefted the massive tusks. Poaching still happens but parks where the “ellies” can live a long life like this are doing something right. And it’s not the humans who have scattered the bones. He guided a zoologist once who arranged them across the earth in order as parts of a model awaiting assembly. The next time Julian visited, the bones had been scattered by elephants, as if they were appalled by the scent of the humans or their unnatural rearrangement of the dead.

“Some elephants pass through here and nothing: They have no reaction. Others, they come here and they touch the bones. They knew him,” he said.

The safari gave us a good mix of hiking and driving. The jeep sometimes is a better blind, especially for the birdlife. We saw a profound range of species, including five of the six resident species of hornbills, and the entire group became obsessed with getting the perfect photo of the vivid lilac-breasted roller. At day’s end, we watched hippos, elephants, antelope, and crocodiles from a blind overlooking a watering hole, and soon the sun sank into magnificent vermillion. We climbed back into the jeep and headed back to camp for dinner.

A hyena crossed the road, and for one moment, it paused to look back at us warily. One ear was shredded and I wondered if this was one of the royal characters fallen from grace.

Kevin Revolinski is an avid traveler and the author of 15 books, including “The Yogurt Man Cometh: Tales of an American Teacher in Turkey” and several outdoor and brewery guidebooks. He is based in Madison, Wis., and his website is TheMadTraveler.com