But address our legitimate grievances seriously 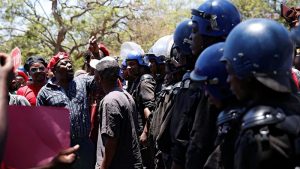 This morning I was pondering over the forthcoming 16 Days of Activism against Gender-based Violence (running from 25 November to 10 December), when I was immediately reminded of a distributing story about a father who always brutally beat up his wife and children every time they expressed displeasure and castigated him over his wasteful spending habits through partying and merry-making, whilst his family wallowed in abject poverty – without adequate food and decent clothing, lacking school fees and appropriate uniforms, on top of facing the grim risk of homelessness due to non-payment of rentals.

What utter evil, I said to myself.

As I was still immersed in such deep traumatic thoughts, my mind could not help equating this to the Zimbabwe government’s openly hateful, hostile and heartless attitude towards citizens of this country, who would be merely expressing their legitimate and understandable disgruntlement over their ever-increasing burdensome suffering and poverty at the hands of a regime with sadist tendencies for flamboyant and flashy lifestyles.

In the midst of this exaggerated extravagance – whereby, the president has an insatiable lust for flying in chartered luxurious private jets all over the planet (and even within the country, where a simple SUV or helicopter can easily do the job), and the powerful receive expensive world-class medical treatment in foreign hospitals, whilst some make five star hotels their residencies for months on end – the rest of the population finds it nearly impossible to put together even one square meal per day, has no running water in their homes most of the time, and can not afford the scarce but hugely exorbitant electricity.

However, when these impoverished and incapacitated people dare to speak out or stand up against this obvious government selfishness and wickedness – whose opulence is paid for by the very citizenry, through endless taxes, yet themselves existing on the verge of starvation and death – they are met with untold repression and even horrendous brutality.

What never ceases to baffle the mind is why a government that purports to be popularly elected by the people, is of the people, and is for the people, finds it virtually impossible to love, protect, cherish, and care for, those same people.

Otherwise, why would those in power rush to label people – who are unquestionably and genuinely suffering, and boldly clamouring for nothing more than a dignified and decent life – puppets of Western countries, who are serving the interests of foreign entities?

Instead of attentively and honestly listening to the cries of its own citizens, why would the government, instead, opt to heavy-handedly treat them as if they were ‘enemies of the state’ – through heinous oppression, repression, and vilification?

Are those in authority seriously telling us that they do not even realise the errors of their ways and that their own greed, corruption and incompetence are directly responsible for the immense impoverishment and suffering of the people of Zimbabwe? If yes, then we have a more demented and psychotic administration that anyone had previously presumed.

How else can anyone explain sending armed forces to fire live ammunition at unarmed protestors crying foul over election results, or denouncing increases in fuel prices – accused of being instigated by the opposition Movement for Democratic Change (MDC)? Even if the rioters were being violent – by allegedly attacking shops and cars – nothing could ever justify this callous loss of human life. Even a criminal accused of murder is awarded his dignity, as is supposed to be apprehended alive, and guns only used by law enforcement agents to immobilise him if he resists arrest or tries to flee.

What is more important to this government – property or the sanctity of human life?

Even the MDC has been repeatedly banned from holding any demonstrations and public rallies ever since, under the pretext that these would be violent – thereby, effectively rendering Zimbabwe a de facto ‘one-party state’.

This is in spite of the country’s constitution allowing for a multiparty democracy, as well as the right for peaceful assembly, demonstrations and engaging in any political activities – of which, the police are mandated to protect innocent people and property, not by banning constitutional activities, but ensuring that their (police) presence at these gatherings is sufficient to prevent any disorder.

Furthermore, doctors who have not been able to attend their duties, due to the pathetically inadequate remunerations they have been receiving from government, have also been accused of being misled by ‘third forces’, or ‘foreign entities’ – thereby, sacked in their hundreds by their employer. Thus, virtually leaving ailing populations to die without any recourse, as private health institutions are the preserve of only the wealthy and well-to-do in our society.

Additionally, labour activists – especially those representing doctors, teachers and workers from both the public and private sectors – have been reportedly abducted, beaten up, and even poisoned – whilst, a recent peaceful march by civil servants was restricted at the very last minute.

Are these people in high offices normal?

In fact, these are the hallmarks of any tyrannical regime throughout history, as has been recently witnessed in the savage crackdown of demonstrators in Venezuela, China’s Hong Kong and Iran – whereby, brute force has been employed under the pretext of foiling plots by ‘foreign agents to cause anarchy and the illegal overthrow of the government’.

Yet, in all these countries, including Zimbabwe, all that the people were crying out for were decent and dignified lives worthy of any human being. A life where they could afford to adequately provide for their families needs, and even comfortable wants.

As much as free political participation and activity are constitutional in Zimbabwe, nonetheless, there is absolutely nothing political about such calls by the people. Even a hungry child, who knows that his or her father spends all the family’s money on partying and merry-making, does not need to be ‘used’ or told by some perceived ‘enemy’ to know that this is wrong and to speak out or stand up against such cruelty.

The same is very true for Zimbabweans. We are not so stupid and foolish not to know of the shameless corruption and extravagance going on in this country at the hands of the powerful and well-connected, and the poverty that the rest of us is burdened with. We certainly do not need to be told or taught or even used by any opposition party, or foreign government, to stand up and speak out against our suffering, whilst those in power live lavishly at our expense.

People of this country are not divided into simplistic groupings of either ‘ZANU PF’ or ‘MDC’, and it is quite foolhardy and disingenuous for those in authority to constantly brand anyone expressing dissent as being a member or supporter of the MDC. These people in power should stop being so narrow-minded, as our disgruntlement goes far beyond petty partisan politics.

The people know very well that there is so much looting of our resources for the benefit of only a few. We also know that there are cartels being provided for, and protected by, the powerful, whereby billions upon billions of United States dollars are unaccounted for – the real reason widely believed to be behind the recent disruption of operations of the Parliamentary Public Accounts Committee, which has been busily unearthing some of these shenanigans.

In fact, there is a Shona adage that says, “Mwana asingachemi anofira mumbereko” – loosely translated means that a child who does not cry out when suffering will die in silence. There are no wiser words that these, especially for the people of Zimbabwe – and this is exactly what we are merely doing, yet our government is spooked by this, as it is haunted by ghosts of ‘colonialism’, ‘imperialism’, and ‘illegal regime change’.

Of course, the people of Zimbabwe are wiser than that, as they are fully aware that this is just a smokescreen and excuse by the administration to stifle, divide, and cower its own citizenry into submission, so as not to boldly speak out and stand up against the wanton corruption and greed of these self-centred powerful officials – which has resulted in the ordinary person on the street’s never-ending and ever-worsening impoverishment and suffering.

By constantly labeling any dissenting voices as ‘MDC’, or ‘agents of foreign countries ‘, the government is mischievously hoping to divide the citizenry, as they know that our suffering cuts right across the population, disregarding any political affiliations – thus, fears a united front against its gross mismanagement and corruption.

I am one of those vocal voices against social injustice and oppression, but am not an opposition member, nor have I ever received a cent from any foreign entity – but, I am just one of the millions of impoverished and suffering Zimbabweans who seeks nothing more than a better life for me and my fellow compatriots.

The government can no longer silence the people of this country by treating us as ‘enemies of the state’, for merely demanding what is rightfully ours. Let us unite, stand together, and refuse to be divided by these state-sponsored lies that seek to brand us as ‘opposition’ or ‘foreign agents’, yet we are all simply Zimbabweans – irrespective of political affiliation or are apolitical – and deserve an equal share of our national cake.