The deepening economic crisis combined with the impact of climate shocks, including prolonged drought, continued to cause the deterioration of the humanitarian situation in Zimbabwe. Various macro-economic developments, including the devaluation of the local currency (RTGS), caused a year-on-year inflation rate of around 300 per cent in August, according to the International Monetary Fund (IMF). 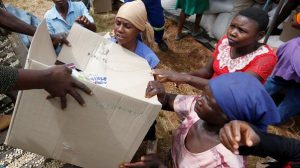 The price of basic commodities–such as food and fuel–have risen steeply, while the drought, increases in input prices and delayed availability of inputs are impacting farmers’ capacity to prepare for the upcoming maize planting season. Rolling power cuts of up to 18 hours per day are affecting the productive sector nationwide and further reducing employment opportunities.

From October 2019, nearly 38 per cent of the rural population–nearly 3.6 million people–will face severe food insecurity (IPC phase 3 and above). At least 1.1 million of them are already in emergency levels of food insecurity (IPC 4), according to the Integrated Food Security Phase Classification. In addition, a further 2.2 million people in urban zones nationwide are cereal food insecure and require immediate support, according to the latest information available. Rates of acute malnutrition are rising and the risk of communicable diseases is heightened as the rainy season approaches, including due to lack of access to potable water. There have already been 5,800 cases of typhoid recorded in 2019. The country is also dealing with shortages of essential medicines and strikes in the public sector, hampering people’s access to vital services, including health and education.

Escalating humanitarian needs are forcing families to adopt negative coping mechanisms, increasing the protection risks faced by women and children in particular. Nearly 841,000 Zimbabwean women and girls require some form of protection from gender-based violence in its various forms: sexual, physical, emotional, intimate partner violence, sexual exploitation and abuse. Education has been negatively impacted, with reports of school dropouts due to the deteriorating situation, as children are forced to seek food and jobs to support their families. Some 171 families who lost their homes due to Cyclone Idai are still living in camps and in need of assistance.