Dozens of riot police charged MDC supporters who gathered at party headquarters in the capital for a rally.

Dozens of riot police charged MDC supporters who gathered at party headquarters in the capital for a rally.

Harare, Zimbabwe – Anti-riot police fired tear gas and attacked a crowd of opposition supporters with batons in the capital on Wednesday.

The crowd gathered outside the headquarters of the main opposition Movement for Democratic Change Alliance (MDC) to hear party leader Nelson Chamisa’s planned “hope of the nation” speech.

A handful of opposition supporters danced and sang for several hours in the morning as police watched from a distance.

A balcony at the headquarters had earlier been converted into a makeshift podium after police barred the MDC from holding the event at the Africa Unity Square, the main venue of opposition protests.

A banner with a photo of Chamisa and public address equipment were perched on the balcony in anticipation.

Justin Mwaramba, an MDC supporter, defied the police ban and stood on the pavement with scores of other supporters. He told Al Jazeera he was optimistic more people would come but feared the heavy police presence would dissuade others.

“What the police are doing is not democratic. It’s not constitutional,” Mwaramba said.

“The people-driven constitution is very clear about our right to demonstrate. It is a clear indication that the ruling party or the present government does not respect the constitution,” he added.

Police officers told people who gathered adjacent to the opposition headquarters to disband.

“Those who don’t have business must disperse,” one riot police officer told those assembled.

But opposition supporters pledged to stay put. “We are not going to move,” an MDC supporter who did not want to be identified said.

“How come they don’t stop ZANU-PF from demonstrating,” he continued, referring to the ruling Patriotic Front party of Zimbabwe.

As the leader of the opposition, Chamisa, arrived at the party headquarters to wild cheers from his supporters, at least 100 police officers who had barricaded the street started charging towards the crowd. 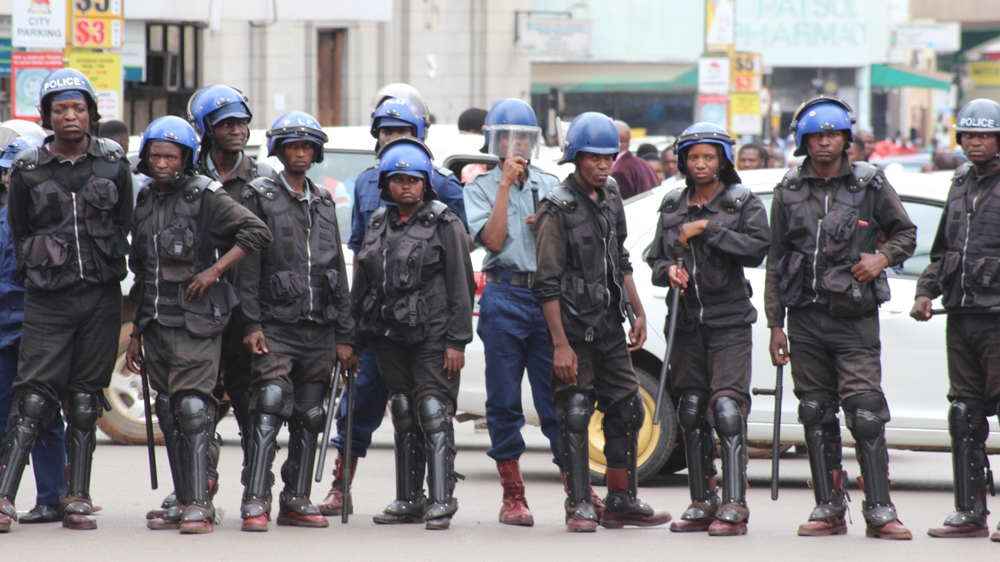 Another casualty was an unidentified journalist who suffered a gash on the back of his head.

As tear gas engulfed the scene, shops in the vicinity were forced to close. A policeman threatened journalists who kept taking photographs but he later moved on.

“It is surprising because we did everything we could to make sure that the police are aware of what we wanted to do,” Sibanda told journalists.

“The MDC is a large political movement in this country and will not be deterred by another political party. It is sad that [President Emmerson] Mnangagwa will decide to use the militant police in the way he has done today. The fact of the matter remains, it is not going to give Mnangagwa legitimacy and it’s not going to stop the MDC from moving forward with its programme and ideals.”

The police, however, denied accusations that the event had been banned. Police spokesman Paul Nyathi said opposition organisers and the authorities had agreed to move Chamisa’s speech to a venue on Harare’s periphery.

The opposition responded that it has a letter confirming the police ban.

President Mnangagwa’s government has been accused of being heavy-handed while dealing with opposition protesters.

Sibanda reiterated that Chamisa remains “committed to the struggle of the people” and “the police are not a force strong enough to stop the people of Zimbabwe”.

“The people should not let up,” he said. “The struggle goes on.”