Mary Chiwenga getting her comeuppance does not change the fact that the men whose ascension to power she famously celebrated with her dancing prowess at the National Sports Stadium in November 2017 are brutal and have no qualms about sacrificing their own to protect their wealth. 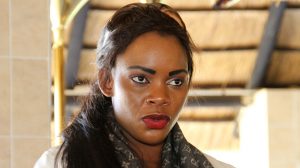 She is finding out what long-suffering Zimbabweans have known for decades that for leaders who no longer feel shame, all is fair in love and war.

Leaders who are not moved by the brutalization of citizens by the police, the army and Mashurugwis, the abject poverty in which over 70% of Zimbabweans live, the complete destruction of the dreams of the next generation, over 90% unemployment, the needless deaths of men, women and children in hospitals the leaders have ruined, the plunder of national resources by people in government and their friends, and the destruction of schools, roads and once highly productive farms etc will not feel any shame subjecting the mothers of their children to the treatment Mary is receiving.

Unfortunately she, and all those relatives of people in power who do not influence their loved ones to do the right things, feed the monsters that eventually turn on them.

So here are a few things the General wants us all to believe:

1.) That he was unaware of his wife’s business dealings.

2.)That when he was airlifted to South Africa for urgent medical treatment, he was not taken straight to a hospital but instead was kept hostage at the Sheraton Hotel for 24 hours by this woman and denied medical treatment, and only released after his Security Team pretty much rescued him from her. Then

3.) later, even though she had held him, hostage, before, his Security Team left her alone in a hospital room with him at her request where she was able to disconnect his IV without setting off hospital alarms, and walk him to the exit of the hospital, and that the hospital staff were only alerted when the security team eventually caught up with her.

Common sense tells me that if the Security detail of a critically ill VP whose wife had tried to kill him before by denying him treatment for 24 hours then allowed her to be alone in a hospital room with him later where she removed IVs etc, then they were the ones trying to kill him.

We are supposed to believe that this man, this no ordinary general who was protected by special forces from being arrested by Chihuri’s police at the airport upon his return from China in November 2017 and who led the military removal of Robert Mugabe from office had a security detail no better than the guards at a rural grinding meal, and that none of these accusations against his wife have anything to do with trying to gain an advantage over her in their divorce proceedings.

If we believe any of this nonsense, then we are the idiots they take us for who fully deserve being ruled by these corrupt, incompetent and brutal leaders.