The Newlands Residents Association has engaged law enforcement agents and the Harare City Council to help in restoring order at the Newlands Shopping Centre which they say has been turned into a sex haven by imbibers. 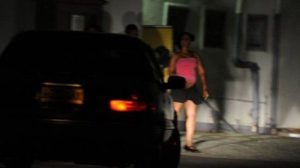 This came out at a residents meeting held on Tuesday. The meeting was attended by Ward 8 Councillor, Keith Charumbira and the Environmental Committee Chairperson, Councillor Stewart Mutizwa.

Representatives from the Zimbabwe Republic Police as well as from the business sector were also in attendance.

Minutes of the meeting indicate that Newlands, Chisipite, Kamfinsa and Runiville shopping centres were experiencing deep problems ‘in terms of nuisance’.

Newlands Shopping Centre has become one of the popular nightspots in Harare with a lot of illegal activities happening there.

Councillor Charumbira agreed that Newlands Shopping centre had been turned into a serious crime zone and acknowledged there was need to take action against illegal drinking activities that have reduced the status of the shopping centre.

According to the minutes, Councillor Mutizwa expressed concern over the developments. At Newlands Shopping Centre.

“In terms of nuisance, Newlands, Chisipite, Kamfinsa and Runiville shopping centres are all experiencing problems. He stated that we need to get rid of idle people who hang around and to this effect ZRP has been asked to handle the nuisance, but this has been ineffective.

“There are bedrooms in cars and unacceptable behaviour which municipal police are unable to help with. However, if nuisance can be proved then there can be an enforcement order issued to close down the nuisance (bars operating at Newlands Shopping centre). He stated that the property values are affected by the nuisance encountered at the shopping centre as a result of it becoming unsightly and with unbecoming behaviour of visitors to the shopping centre,” said Councilor Mutizwa.

The minutes also showed that residents who attended the meeting expressed concern over the state of affairs at Newlands Shopping Centre and said ‘they do not shop there anymore because of the filthy state and the inability to find a parking spot’.

It was also reported that some tenants at the shopping centre had since left as standards continue to decline.

A representative from the Zimbabwe Republic Police suggested the setting up of a police base at the Newlands Shopping Centre saying this would largely assist in maintaining order.