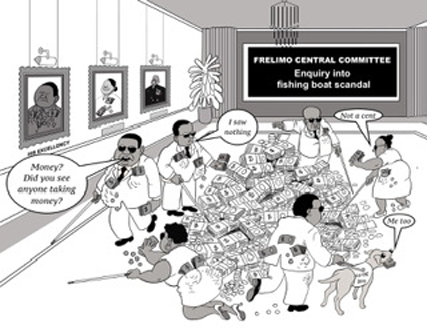 A criminal court in New York is likely to wrap up hearings today over Mozambique’s long-running “boat saga” that saw millions of dollars stolen from the national account.

And in the most recent evidence, President Filipe Nyusi and leading members of the ruling Frelimo party have been named among those who allegedly received cash they did not declare to Parliament.

Six years ago, Lebanese ship-builder, Privinvest won a tender to supply the government with fishing vessels and intercept craft to police the Mozambique Channel where poaching is rife, with most of the catch taken to China.

Finance was provided by a Russian bank and Credit Suisse.

Privinvest completed the tender and also provided technology for Mozambique to set up its own ship yard, but environmental groups say many of the vessels have yet to be deployed.

However, the real problem was millions of missing dollars from the loans, and a $2bn hole in the state budget.

Drawing on Obama-era laws for deals that either use the dollar or affect American investors, the US Department of Justice brought a case against bankers from Credit Suisse who pleaded guilty to stealing from the project.

In a New York criminal prosecution against Privinvest salesman Mr Jean Boustani, the jury heard how his company helped fund Frelimo’s 2014 election campaign, and gave money to Mr Nyusi and to the family of former president. Armando Guebuza.

The court is expected to wrap up hearings this afternoon. A guilty verdict from the jury would, in a sense, confirm Boustani’s admission of the payments.

Embarrassing enough, but an appeal or retrial could be worse for Frelimo. Boustani made the claims to a tired courtroom near the end of his testimony. In a new hearing, they would mark the starting point.

Mr Nyusi has denied the allegations.

In Maputo, the state has taken its own legal action against Privinvest boss and Lebanese national, Mr Iskandar (Sandy) Safa whose company provides naval craft to governments around the world, including France and Germany. If that case goes ahead, it will be heard by a commercial court in London, though with the latest revelations it’s not clear whether Mr Nyusi will proceed.

In northern Mozambique, fighters from terror groups, al-Shabaab and Islamic State have been waging war on police, army and the local population.

Russia’s private military group, Wagner, has deployed armed personnel, only to have their men ambushed or beheaded by the rebels.

France said it would help with intelligence, including scans from one of its satellites, but the government in Maputo is said to still be “in negotiation” with Paris.

The United States has offered similar support while China and Germany have increased surveillance of the area.

Former members of the armed forces reportedly carry out training for the rebels.

Despite President Nyusi and others being named over the boat saga, Washington is unlikely to pursue anyone in Frelimo so long as they need Mozambique as an ally in the fight against al-Shabaab.

But under tough anti-corruption laws in Europe and the US, defence contractors may be wary of engaging with Mozambique. But there will also be focus on military aid including the French offer to share intelligence, with questions on whether money has changed hands.

Adding to woes, Mozambique’s general election in October was criticized by donor countries. The EU mission spoke of “an unlevel playing field”, with Frelimo using state resources, while the US embassy in Maputo cast doubt on fairness. Facebook took down a site it claimed was a Russian attempt to influence the poll.

The main opposition, Renamo, claimed widespread rigging, with some of their observers arrested when they reported acts of voter fraud to the police.

Frelimo won a landslide victory of 73 per cent.

There have since been armed attacks in Renamo strongholds fuelling fear of a return to civil war.

Government forces already tied down in the north would be hard pressed to deal with violence elsewhere.

The court in New York resumes today around 3pm southern Africa time, with a verdict possible the same day and almost certainly by the end of the week.