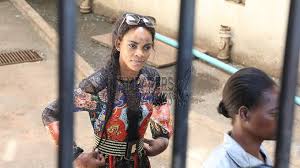 “The manner of arrest of my daughter Mary Chiwenga is unacceptable. She needs a level of dignity! Chiwenga cannot use revenge to settle scores with his wife,” Mubaiwa said.

Marry Chiwenga, née Mubaiwa, was arrested at the weekend and appeared at Harare’s magistrates court on Monday where she was remanded in custody.

She is accused of illegally transferring almost US$1m (£740,000) overseas to purchase luxury cars and property, and faces additional charges of attempted murder.