Modest inventory greeted with scepticism in Zimbabwe, where dictator was thought to have amassed fortune over 40 years 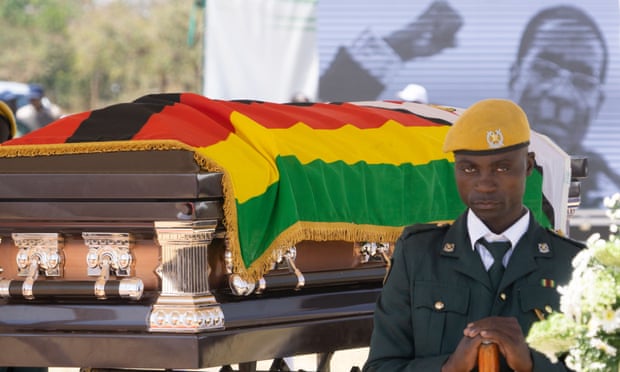 Robert Mugabe’s coffin lying in state before burial at his rural home town of Kutama, against the wishes of the government, which wanted him interred at the National Heroes Acre in Harare. Photograph: Zinyange Auntony/AFP/Getty Images

Robert Mugabe left $10m (£7.7m) in the bank, some small plots of land and a handful of modest properties, a list of his estate published by a state-owned newspaper in Zimbabwe has shown.

The report of the relatively limited fortune of the late dictator, published on Tuesday, was greeted with scepticism by many in the poverty-hit southern African country.

Mugabe, who died in August aged 95, was thought to have amassed a portfolio of investments worth hundreds of millions, if not billions of dollars, over his near four-decade rule.

The most recent list was revealed when Mugabe’s daughter Bona Chikowore wrote to legal officials seeking to register her father’s estate, which she said included $10m held in a local bank, four houses in the capital, Harare, 10 cars, a farm, his rural home and an orchard, the Herald newspaper reported.

No will has yet been found and there has been no other declaration of Mugabe’s wealth, or that of his second wife, Grace, nor of his sons and other relatives.

The former guerrilla leader, who took power in 1980 and ruled for decades, was buried in September in his rural home town of Kutama.

The final burial place caused tension between the government, which wanted him to be interred at the National Heroes Acre, a hilltop shrine in Harare, and his family.

When he was ousted from power in November 2017, Mugabe was given a generous state pension and a retirement package that included a pension, housing, holiday and transport allowance, health insurance, limited air travel and security.

Some of the Mugabe family wealth has been exposed by a series of legal quarrels. One, between Grace Mugabe and a Belgian-based businessman over a $1.3m diamond ring, lifted a veil on the lifestyle of his widow, nicknamed “Gucci Grace” for her reputed dedication to shopping. The family is believed to have an extensive portfolio of luxury homes overseas. In 2015, a dispute revealed their ownership of a $7.6m home in Hong Kong.

The ruling Zanu-PF party said in October it planned to transfer ownership of the sprawling mansion in Harare where Mugabe lived until shortly before his death to the family. The house is worth several million dollars.

The Mugabes are also thought to own more than a dozen farms. Several are in Mazowe, about 40km (25 miles) north of Harare. One, belonging to Grace Mugabe, has been the centre of a recent land dispute.

A 2001 US diplomatic cable, later released by WikiLeaks, said that while reliable information was difficult to find, there were rumours that Mugabe’s assets “include everything from secret accounts in Switzerland, the Channel Islands and the Bahamas to castles in Scotland”.

The news of the Mugabes’ wealth comes as Zimbabwe plunges further into a humanitarian crisis. The UN food agency said on Tuesday it was procuring 240,000 tonnes of food assistance to deliver to 4.1 million people in the former British colony where food shortages are being exacerbated by runaway inflation and drought induced by climate change.

“We are very much concerned as the situation continues to deteriorate,” Eddie Rowe, World Food Programme country director, speaking from Harare, told a news briefing in Geneva.

The country, once the breadbasket of Africa, is experiencing its worst economic crisis in a decade, marked by soaring inflation and shortages of food, fuel, medicines and electricity. The aid will be for January to June, Rowe said.