Leonard Mawora can't eat, he can't sleep, and he can't stop searching for his passport. 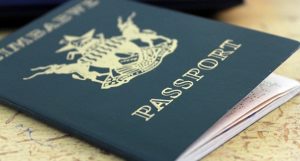 His apartment is a mess of clothes after combing through every inch of his place — including all the trash bags.

The 26 year-old business student at Memorial University in St. John’s should be on his way home to Zimbabwe, but he’s stuck on his couch in his basement apartment.

“I am in a tight spot, because in that passport was my study permit, there was my U.K. visa, my Canadian visa,” he said. “So I am stuck, I can’t even go anywhere.”

Last week, he purchased two bags from the Winners on Stavanger Drive to carry what he needed on the long journey to Africa.

He realized he didn’t need both bags — but had already started packing them — so he took out what he owned and brought the black Guess duffel bag back to the Winners store.

Little did he know that tucked away in that bag was the most important document he owned, and according to store staff someone bought the bag on Saturday, before Mawora could get it back.

In an email to CBC a spokesperson for Winners said it feels terrible about Mawora’s predicament.

If people could just check their bags, maybe my passport is in there somewhere. – Leonard Mawora

The email goes on to say that the store can’t track the item, but “we fervently hope that a good Samaritan will find and return the documentation.”

Mawora’s heartbreaking story gets worse — he was heading home to mourn the death of his younger brother.

“It’s been really hard, because the world can be a lonely place,” said Mawora. “Since I lost my passport, I cannot even do anything.”

The international student has spent much of the past few days on the phone with anyone he thinks might be able to help.

The Zimbabwe embassy in Ottawa told him they could get him emergency travel documents to get into his home country, but without his Canadian student visa he can’t get back to St. John’s, and Mawora says it’s not easy to get documents in Zimbabwe.

“There are other people who have been waiting for this passport for more than two years and they still haven’t received this passport,” he said.

He told CBC the cost of a new passport would be approximately $700.

As a last resort he’s making a public plea to anyone who might have bought a black Guess bag from the Winners store in St. John’s over the weekend.

“If people could just check their bags, maybe my passport is in there somewhere,” he said. “Right now I’m stuck.”