President Cyril Ramaphosa has made statements about the need for the US to lift targeted sanctions. Beyond this call, he has not done anything tangible to show that Zimbabwe is his top foreign policy priority, writes Mpumelelo Mkhabela. 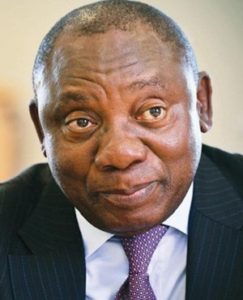 The collapse of the Zimbabwean economy is primarily a consequence of the failure of the country’s politics. Former president Thabo Mbeki, described by his US counterpart George Bush in 2003 as a “point man” in resolving the Zimbabwean crisis, was very consistent in saying Zimbabweans ought to solve their problems.

It was a line Mbeki maintained to reject attempts by powerful countries to intervene militarily or impose a solution on Zimbabwe. To many observers, Mbeki’s stance amounted to abdication. Of course, military intervention would have been completely wrong. But sterner efforts in dealing with an otherwise very stubborn President Robert Mugabe, who had begun to dismantle the economy and, in the process, transform himself from a liberation hero to a villain, would more likely have yielded better results.

Alas, the situation reached a point where a World Bank paper described Zimbabwe as having been stuck in a double trap of bad governance and low income. These were underpinned by pervasive corruption, gross economic mismanagement and political instability. By 2008, Zimbabwe’s inflation had reached… listen carefully… 231 million percent!

This is because the government was trying to patch up the budget deficits by printing the Zimbabwean dollar and adding too many zeros on the notes until there was no more space left. Mugabe rejected the advice of monetary experts at the central bank who had warned against printing money, describing them as being too steeped in what he termed “bookish norms”. Zimbabwe is teaching us a lesson: never let politicians a centimetre closer to the central bank’s printing presses.

Anyway, we are all familiar with the disaster that befell Zimbabwe. You need not visit Zimbabwe to appreciate the decimation of their economy. You only have to look at the Zimbabweans clogging the borders into South Africa and contributing to an already congested labour market characterised by almost 30% unemployment.

Zimbabweans have no choice. Unable to remove Zanu-PF from power due to its enduring struggle credentials, ability to rig elections and unwavering backing by an army that keeps an eye on internal party dynamics, Zimbabweans are all over South Africa to eke out a living.

Some South Africans simplistically think you can shut down borders, problem solved. They are wrong. Even the apartheid government’s electric fence between South African and Mozambique could not stop Mozambicans from escaping civil war. Zimbabwe has almost arrived at a stage where the consequences of human suffering equal that which is typical in war zones.

But the former point man has long vacated public office. The autocratic Mugabe has departed the land of the living. Now presidents Cyril Ramaphosa and Emmerson Mnangagwa must jointly lead efforts to revive the Zimbabwean economy.

We know that it’s not enough to say Zimbabweans must solve their problems. Theirs are our problems too. There is no need to obfuscate matters. To a large extent, one of the reasons South Africa’s economy is weak is that it has lost a strong trading partner next door.

No country in the southern African region has replaced Zimbabwe’s value to South Africa when it was still a viable economy. When trade and investment flows were at the peak in value between the two countries, the South African rand would react to economic and political developments in Zimbabwe. There was a time when the rand was so sensitive that the South African government would explain to international investors that South Africa was not Zimbabwe. That has changed. The rand hardly reacts to developments in Zimbabwe these days. It is almost as if Zimbabwe no longer exists.

Such is the extent to which the Zimbabwean economy has become minuscule in relation to South Africa’s even as the latter has its own difficulties lately. South Africa has effectively lost a lot from a trade ally that used to add value to our economy.

The Afrikaner industrialist Anton Rupert, whose son Johann is now a poster boy of so-called white monopoly capital, many years ago referred to the need to help develop the economies of neighbouring countries “because you can’t trade with a poor neighbour”. Today, the reality is that it’s not a matter exclusively for the Zimbabweans to resolve their problems. They need help.

South Africa has a vested interest in getting the economy of Zimbabwe going again. Ramaphosa has made statements about the need for the US to lift targeted sanctions. Beyond this call, he has not done anything tangible to show that Zimbabwe is his top foreign policy priority. Nor has he shown he has ideas about the Zimbabwean challenge. He must make it a top foreign policy priority. A lot can be done, notwithstanding the sanctions that only are directed at a few high-ranking individuals.

Zimbabwe is on its knees. It should not be allowed to reach a point where it lies flat on its belly before we act. Instead of exchanging Twitter pleasantries about birthdays and the like, Ramaphosa and Mnangagwa, working with genuine South African investors who can mobilise capital, must draft and immediately implement an investment plan to help Zimbabwe’s economy to get back on track.

South Africa can achieve a lot for itself by reinvigorating Zimbabwe’s economy while nudging its leaders to respect human rights. Not only would we re-fertilise a market for our goods by revamping the capacity of the Zimbabwean economy, we will also profit immensely by helping to instil positive investor sentiments in the region. International investors considering to set up in Zimbabwe typically watch the behaviour of investors next door. So, if there is a fellow African leader Ramaphosa should talk to regularly about serious issues, it is Mnangagwa.