Africa is known for its talented rugby players. Uganda, Namibia, Senegal, and South Africa are some of the countries that compete in international rugby tournaments. 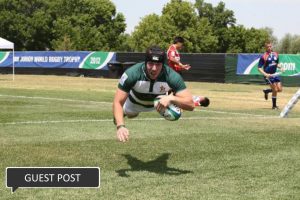 Takudzwa was born in Harare on Jul 22, 1985. He started his rugby career with the Mashonaland Club. The Zimbabwean winger later relocated to the U.S. and played for Plano Rugby Club and Dallas Athletic Rugby Club. He later joined the United States national rugby team. Takudzwa made several tries in the 2007 Rugby World Cup against Samoa and South Africa.

Eddie Jones, England’s coach offered him a trial with the Saracens but Takudzwa received another offer from Biarritz. He signed a two-year deal with the rugby club on November 6, 2007. The winger played for Top 14 for nine years. He scored two tries during the 2007/2008 Heineken Cup and helped the French side reach the Heineken Cup final the next season. Takudzwa scored five tries in the 2010/2011 Heineken Cup.

Tendai is a retired rugby player who played for the Sharks and the South Africa rugby team. He was born in Zimbabwe and later acquired South African citizenship. Rugby fans nicknamed him ‘The Beast.’ the Zimbabwean prop made his first appearance for South Africa on June 14, 2008, against Wales.

The Zimbabwean born player had a great 2008 Super 14 season. He was a reserve in the South African game against the Wallabies. Tendai showed his prowess when he scrummed against Phil Vickery in 2009. He received the man-of-the-match award. He conceded a few penalties when playing against Adam Jones in his second test.

He is one of the most capped South African rugby players in history with 117 caps. Also, Tendai is the 17th forward globally with the most caps. He won the 2019 Rugby World Cup. Rugby fans can visit https://www.betway.co.za/luckynumbers to try their luck using their luck and to bet on Rugby.

Wade was born in Zimbabwe on September 23, 1988. He represents Exeter Chiefs in the prestigious English Premiership. The Zimbabwean flanker played his first game for Western Province on March 10, 2012. The club defeated Boland Cavaliers 51-22. Donovan scored one try in six appearances in the 2012 Vodacom Cup tournament. He played in the final 2020 Australian tour game against Western Force after Nick Koster and Duane Vermuelen sustained serious injuries.

Brian was born in Bulawayo, Zimbabwe on September 28, 1984. He started his professional rugby career playing for the Lions as a prop. The prop moved to the Stormers in 2008 and later joined the Saints. His career at Springboks didn’t last long since he lacked South African citizenship. He later joined the Northampton Saints.

The Zimbabwean national rugby team competes in regional and international tournaments. The Zimbabwe Rugby Union administers the team. It comprises of talented players. However, most of the finest players from this South African nation play for other countries. They include Takudzwa Ngwenya, Brian Mujati, David Pocock and Donovan Armand. You can wager on them on Betway.