HARARE (Xinhua) -- The UN World Food Program (WFP) has placed Zimbabwe among 15 global hotspots at risk of deteriorating further into crisis if there is no rapid response to the prevailing food insecurity. 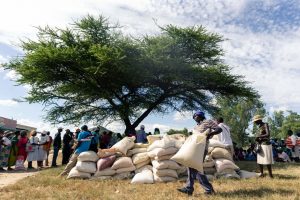 About half the country’s population, 7.7 million people, will need food assistance in 2020 as the country grapples with a severe drought and economic melt-down.

The report said while a new decade may have dawned, there was little cause for fresh optimism in countries and regions where conflict, political instability and climate disasters were threatening the food security of millions of people.

“The UN World Food Program (WFP) has identified 15 critical and complex emergencies at risk of descending further into crisis without a rapid response and greater investment. While WFP continues to provide extensive assistance to high-profile emergencies such as Yemen and Syria, Global Hotspots 2020 highlights the fastest-deteriorating emergencies requiring the world’s urgent attentionm,” the report said.

The situation in Zimbabwe has been described as “overheating” as the country experiences its worst drought in years with temperatures hitting more than 40 degrees Celsius.

It said food insecurity levels were the highest in a decade with the 2019 cereal harvest falling more than 50 percent short of the needs for the 2019-20 lean season.

The world body pledged to nearly double its assistance to reach up to 4.1 million of the hardest hit Zimbabweans and said it would switch to distributing food in rural areas from January, due to concerns over hyper-inflation and reduced availability of commodities in rural markets.

It added that it was also supporting efforts to boost community resilience to crisis, including construction of small dams to conserve water and establishing vegetable gardens.