Same way as they arrested Marry Mubaiwa - an open letter 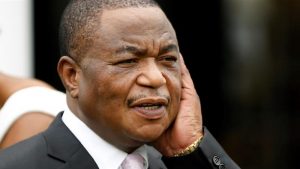 File pic: General Constatino Chiwenga reacts after taking an oath of office as vice president during the swearing in ceremony at State House in Harare, Zimbabwe, December 28,2017 [Philimon Bulawayo/Reuters]

In this open letter to the Zimbabwe Anti-Corruption Commission (ZACC), which I will copy to the international bodies who have been concerned about the Zimbabwean situation, I will want to argue that ZACC must now move in to arrest Vice-President Constantine Chiwenga, in the same way as the same body arrested Mary Chiwenga.

One of the charges Mary Mubaiwa has been arrested for involves externalizing foreign currency, a revelation made by Vice-President Chiwenga. Now that Mary Mubaiwa, the estranged former Army General’s wife, has also disclosed that the couple acquired properties outside the country, which have been registered in the names of family members and friends, some of the money used having been corruptly acquired from bribes given by business persons among other sources, ZACC must now move in and arrest the former army general. We are told by Mnangagwa and other Zanu PF heavyweights that no-one is above the law, so the Acting President must be arrested and prove his innocence in the courts of law.

The fact that the Acting President is now trying to persuade his estranged wife for an out of court settlement tells volumes. Mary should stand her grounds and refuse such advances from a cruel man who has tormented her so much. Mary needs protection from all well meaning people as she has some crucial information that could deal a huge blow to corruption by the top brass in the country.