HARARE, Zimbabwe (AP) — Zimbabwe police on Friday raided the offices of the country’s main opposition party, and a spokesman says the officers were looking for machetes. 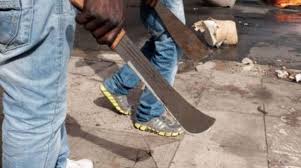 Police officers blocked roads leading to the Movement for Democratic Change party in the capital, Harare and, armed with a search warrant, forced their way in.

The raid came ahead of a “state of the nation” speech by party leader Nelson Chamisa next week. Frustration has been growing in the southern African nation as the economy collapses.

Luke Tamborinyoka, the MDC deputy spokesman, said the search warrant showed that police were searching for machetes in the offices.

Gangs, mainly of artisanal miners fighting for control of goldfields, have in recent months unleashed violence around Zimbabwe, with machetes as their weapon of choice. A policeman was recently killed at a mine while trying to disperse the gang.

But Tamborinyoka distanced his party from the machete violence, saying the raid was part of the “usual harassment” the opposition is subjected to by police.

Police have routinely banned opposition activities such as protest marches and meetings in the southern African nation.