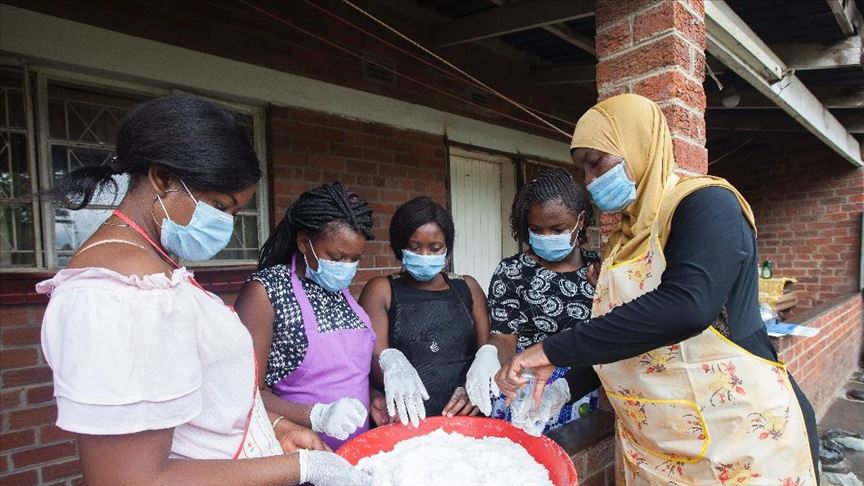 Six years ago, it was only a dream for Michelle Chitembwe, 47, to own a bed, who slept on the floor of her slum house in Harare, Zimbabwe’s capital.

But challenging the difficulties, Chitembwe launched a soap-making venture and has shifted to a life of the rich from that of rags. She now enjoys her luxurious house in a Harare suburb. Her initiative was a magic touch on her life, for sure, but it also changed the lives of many women as she employed scores to ensure a future for them.

For entrepreneur women, there are organizations in Zimbabwe showing them a way to help elude poverty.

“Apart from working my way through single-handedly to where I am now, I have also obtained support from organizations like USAID [U.S. Agency for International Development] to shape my vision,” she told Anadolu Agency.

Chitembwe said she can now afford a private school for the education of her children thanks to her soap-making venture.

Actually, Zimbabwean women like Chitembwe have turned to forming home-based industries, with some of them even creating and producing dishwashing liquid, soft drinks and perfumes.

“These entrepreneur women have become sources of most of the domestic products many of us sell in our shops,” said Humphrey Gatawa, a Harare-based indigenous businessman.

Agness Chiramba, who lives in Mbare township in Harare and makes dishwashing liquid, said the market for her product has never ceased to amaze her.

“I’m so amazed at the way local retail businesses have clamored for my dishwashing liquid. I tell you I’m making money just by making dishwashing liquid, pocketing over $200 every day in sales,” Chiramba told Anadolu Agency.

She was an unemployed woman with academic education on chemical engineering. Chiramba, without options, turned to making dishwashing liquid in order to support herself as a single mother.

Benefiting the support of non-governmental organizations, women entrepreneurs are thriving in Zimbabwe although their activities are not regulated by government due to bureaucracy and corruption which many fear would derail their success.

“USAID Zimbabwe funded the course through its partnership with Junior Achievement Zimbabwe, a forum for youth business growth aggregators and that has helped women like me,” said Chiramba.

As a result, Chiramba and Chitembwe have become self-assisted, at a time Zimbabwe’s economy teeters on the brink of collapse, with inflation around 300%, according to the International Monetary Fund (IMF).

Zimbabwe battles with 90% of unemployment, according to the Zimbabwe Congress of Trade Unions. However, women like Chiramba and Chitembwe have challenged the crisis with their entrepreneurial skills and have mastered over the years.

Based on statistics from the Ministry of Women Affairs, Community, Small and Medium Enterprises Development in Zimbabwe, about 261,000 women are involved in self-assisted projects, like soap- and detergents-making among other income-generating projects.

Of late, development experts have attributed the rise in women venturing into home-based manufacturing industries to the hostile economy of the Southern African nation.

“The women have seen that men are losing their jobs as formal industries are closing down and the only option they have hatched for survival over the years is to leap into self-aided projects in order to survive the harsh economy,” Donald Sengwayo, a Zimbabwean development expert based in Harare, told Anadolu Agency.

Except for the technical and financial support they have earned from non-governmental organizations like USAID, the women say, the Zimbabwean government itself has not moved in with any help.

“NGOs have seen the need to support women and our government has not so far done anything meaningful to back our strides, leaving us to progress with the help of non-governmental organizations like USAID,” Chitembwe said.

For Zimbabwe’s entrepreneurial women, working at the backyards of their homes is not enough — they are seeking more.

“Personally, what I wish is to end up, one day, running a huge industry producing soaps, and even exporting,” Chitembwe said.

But for many women like Chiramba, this may not be easy.

“We have no access to loans at banks here because most of us don’t have collaterals to enable us secure more capital from the banks,” Chiramba said.

Apart from difficulties in accessing to capitals from banks, Chitembwe and Chiramba said they also had to suffer from getting customers for their homemade products although they have now gone past the stage.

“Shop owners and ordinary people didn’t really trust my products at first, rather preferring ordering stock from countries like Dubai, South Africa or India; you see, naturally as Zimbabweans we shun locally manufactured products. So, lots of hard work had to be done explaining to people why I was making my product from home before they could buy,” Chiramba said.

Now, thanks to their endurance, many female entrepreneurs in Zimbabwe have become optional sources of affordable homemade consumable products at a time inflation has shot through the roof in the Southern African country.

“Due to rising prices, women who produce staff like soaps, candles and dishwashing liquid have become providers of such items at quite low prices and I’m personally happy dealing with them,” Marian Sithole, a 26-year old Harare woman, told Anadolu Agency.

Even Taurai Kandishaya, national coordinator of the Zimbabwe Citizens Forum, a civil society organization with links to the country’s governing Zimbabwe African National Union Patriotic Front (Zanu-PF), is excited about the products women are producing in their backyards.

“Homemade products made by these entrepreneurs are offering our citizens a cheaper alternative although they may eventually be affected by price rise in the raw materials they use, which may eventually force them to increase their prices,” Kandishaya told Anadolu Agency.