Emmerson Mnangagwa is a prime candidate for the International Criminal Court because of heinous crimes against humanity by rogue elements of the army who twice callously murdered innocent Zimbabweans in a space of five months under his watch. 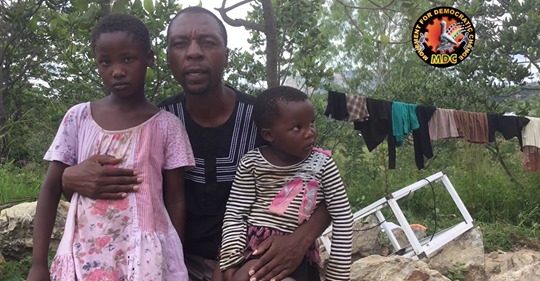 He has dismally failed to compensate aggrieved families of the State-instigated murders in line with the recommendations of an international investigation committee that he commissioned himself. Mnangagwa has lied to the international community that he has compensated the victims of the murders when in fact orphans and families of the State-sanctioned murders are wallowing in abject poverty as evidenced by the video accompanying this statement. The orphans of the six victims of the August 1, 2018 murders are failing to go to school and are scrounging for food while the murderers are still to be prosecuted, in spite of Mnangagwa lying to the world that he has complied with the recommendations of the Mothlante Commission.

The Commission found the police and the army liable for the murders, which makes Mnangagwa personally culpable because he is the commander-in-chief of the military, whose rogue elements needlessly snuffed out the lives of the six innocent Zimbabweans.

The United Nations Security Council has let Zimbabwe down by failing to drag Mr. Mnangagwa before the International Criminal Court for crimes against humanity. While Zimbabwe is not a signatory to the Rome Statute of the ICC, there is a precedent of the world body not folding its hands when non-State parties have grossly abused human rights. The UN Security Council intervened in Sudan in 2005 and in Libya in 2011 when the respective countries’ leaders were fingered in crimes against humanity. Notwithstanding the excesses of the P5 members of the UNSC in Libya in 2011, the Responsibility to Protect (R2P) remains a noble principle that should send a clear and unequivocal message to killer governments such as the Mnangagwa regime. Africa has also let Zimbabweans down as she has adequate provisions under Article 4 (h) of the constitutive Act of the African Union that allows the regional body to intervene in member States in respect of “grave circumstances.”

And the murderous predisposition of the ED regime constitutes a grave circumstance.

Zimbabweans are not safe from their own government. State security agents have twice killed people under the murderous regime of Mr. Mnangagwa while machete-wielding vigilante groups have wreaked havoc in the countryside, with no action whatsoever being taken against them. A slow genocide is also taking place in the country’s health institutions as the regime has completely abdicated its responsibility in respect of providing prudent health services to the citizenry.

Zimbabwe is ripe for intervention and Mr. Mnangagwa is a prime candidate for the ICC. No government elected by the people can kill the very people who voted for it unless such a government has no mandate from the people.

Zimbabweans will soon be taking it upon themselves to engage in a robust but legitimate call for the true people’s government they voted for in 2018.