Emarald Mushore the first seed in the recently held tournament at Prince Edward School on the 21st of February lived up to expectations and won the tournament after shrugging off stiff competition from Elisha Chimbamu and Candidate Master Spencer Masango among other players who took part in the chess tournament. 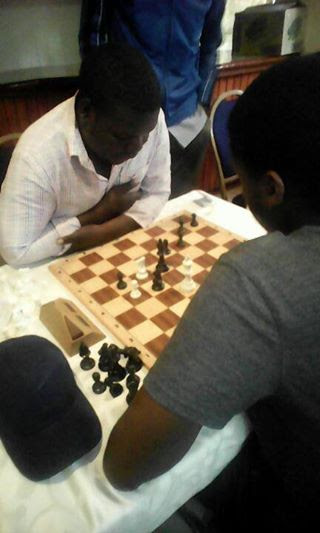 Emarald Mushore was however tied for a first-place with Roy Mwadzura who defeated CM Masango in the final round to finish with 5.5 points out of 6 games played. The two were separated on Buchholz in this rapid chess tournament which was 20 minutes plus ten seconds increment per player per game. Cyril Chigodo held his own against Emarald Mushore in the final round when he salvaged a draw against the much fancied Mushore who performed well in the last Rapid Chess tournament in which Zimbabwe came third at the Rapid Chess Championships in Morrocco last year.

This was his only draw and he had no loss in the whole tournament. Roy Mwadzura performed well when he won in a pulsating game against Specer Masango to finish with 5.5 points. He eventually came second on buchholz though he was tied with the same number of points. Another set back for Masango was a draw against Amos Makamba in round three. He therefore failed to make it in the top three of the tournament winners. Elisha Chimbamu defeated Ishmael Sibanda in the last round after suffering a defeat at the hands of Emarald Mushore who was the tournament’s top seed. This placed him to third position which had a six way tie-break. Cyril Chigodo, Rapozi Prince, Mashumba Ian, Murasiranwa Blessing, and Chidembo Prince completed the list of players with 5 points. on the 9th position was Spencer Masango, Vitalis Mapuranga, Makamba Amos, and Moyo Ruvarashe all had 4.5 points completing the top ten finishers in this tournament.

Woman Candidate Master Kudzanai Charinda was the best lady with 4 points winning herself $200 RTGs, while the winners walked away with $700 RTGs each as they were tied for the first position. There was also an element of inclusion which was very welcome as the players from in the Zimbabwe Correctional Services also took part with some inmates ensuring that they also took active part by liberating their minds and freeing them from the behind the walls activities. This is a welcome development from the Zimbabwe Chess Federation Executive led by Dr. Collen Tongowona.

Meanwhile KUPA  chess tournament registration still in progress contact Makamba as alluded before and Ecocash Tafadzwa on her previous given number. The venue for the tournament will be Zimbabwe Agricultural Show at Robbie Mupawose Hall. Meanwhile the double chess league fixtures will be played at Prince Edward School on the 29th of February 2020. Games start at 0800 hours.