The British newspaper the Times has published a report on the tawdry divorce battle between Vice President Canstantino Chiwenga and his wife Marry. 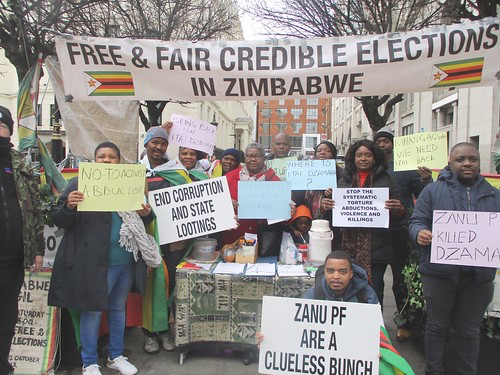 Zimbabweans will be familiar with the lurid account of attempted murder, voodoo and drugs. But what rang a bell with the Vigil was Marry’s comment that she was doomed because of ‘command justice’. (See: http://www.zimvigil.co.uk/vigil-news/campaign-news/1065-marry-chiwenga-jilted-wife-off-zimbabwe-strongman-fears-for-her-life).

Zimbabwe has become a command state: ‘command agriculture’ has provided a smooth avenue for corruption, ‘command economy’ an equally convenient way of siphoning off the country’s riches to Zanu PF bigwigs.

It has long been clear that ‘free and fair elections’ is an aspiration rather than the rule. In many countries elections have become a charade. The fuss over the lacst elections in Malawi provide bracing evidence of this. Zimbabweans are used to having ‘command election results’ followed by Marry Chiwenga’s ‘command justice’ when the opposition protests.

President Mnangagwa is already preparing for the next elections in 2023, though he admitted to the Politburo this week that his government had failed and had no new ideas (see: https://www.zimbabwesituation.com/news/mnangagwa-admits-failure-he-must-go/).

The schizophrenic position of the government could perhaps explain the extraordinary behaviour of a senior Zimbabwean diplomat in the United States who has been flown home after being arrested by police while running around in the middle of the night screaming and shouting (see: https://www.zimlive.com/2020/03/06/top-zimbabwe-diplomat-breaks-into-united-states-home-gets-immunity/).

We can only speculate that he could have been driven mad by the US Government’s decision to renew targeted sanctions imposed on some Zanu PF officials. Ta US statement said President Mnangagwa’s government ‘has arguably accelerated its persecution of critics and economic mismanagement in the past year, during which security forces have conducted extrajudicial killings, rapes, and alleged abductions of numerous dissidents.’ (See: https://www.zimlive.com/2020/03/04/us-extends-zimbabwe-sanctions-over-accelerated-persecution-of-critics/).