WASHINGTON — The United States on Wednesday imposed sanctions on Zimbabwe's state security minister and its ambassador to Tanzania, the U.S. Treasury Department said, accusing them of human rights abuses, including directing an attack on peaceful protestors. 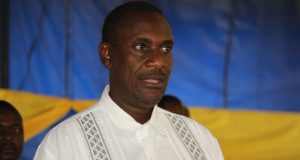 Owen Ncube, Zimbabwe’s state security minister, was blacklisted over accusations that he ordered security services to abduct and mistreat members of the opposition group, the Treasury Department said in a statement.

The Treasury Department said it imposed sanctions on Anselem Sanyatwe, Zimbabwe’s ambassador to Tanzania, accusing him of directing security forces to attack protestors during demonstrations after the 2018 elections, when he was commander of the National Army’s Presidential Guard Brigade.

U.S. Secretary of State Mike Pompeo in a statement on Wednesday urged Zimbabwe’s government “to immediately end state-sponsored violence including against peaceful protesters, civil society, labor leaders and members of the opposition in Zimbabwe, and to investigate and hold accountable those responsible for human rights violations and abuse.”

Six protesters and bystanders died and dozens were injured in 2018 in violence following delays in announcing results that made Emmerson Mnangagwa the first elected head of state since Robert Mugabe’s removal from power.

The sanctions freeze any U.S.-held assets of the two officials and generally prohibit Americans from doing business with them.

Ncube and Sanyatwe were previously barred in 2019 by the State Department from entering the United States.