“Was this fake news after all and, will the fake news charge stick?” 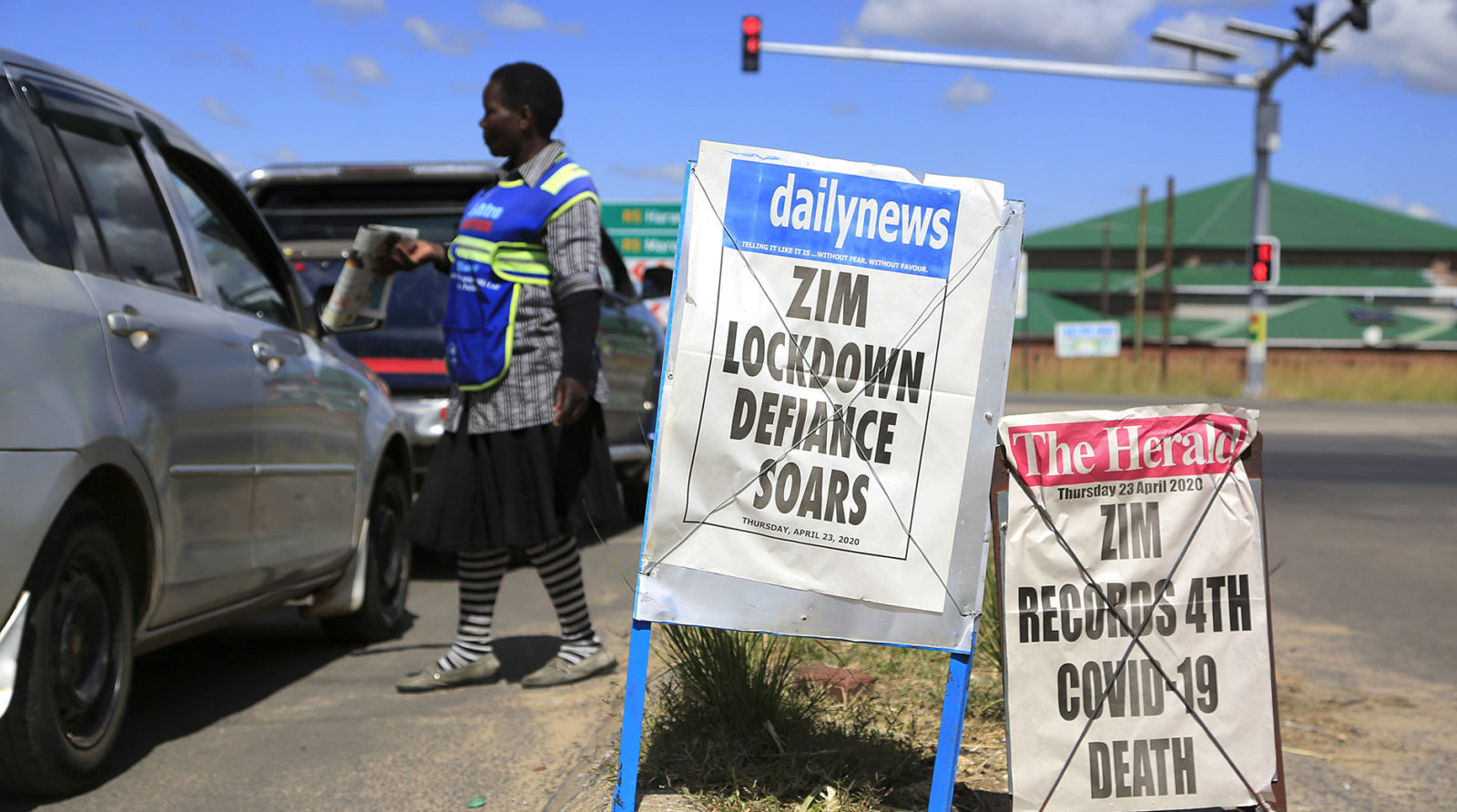 In her latest frontline report, Maverick Citizen’s Thandekile Moyo continues a series of articles that look at life in Zimbabwe under the Covid-19 lockdown; what’s changed, what’s not, and what will never change – for as long as corrupt and complicit regime continues to use the power and resources of the state to keep itself in power.

On 14 April ZBC News online, the official Twitter page of Zimbabwe’s only TV station, posted a video of President Emmerson Mnangagwa saying that he was aware of a false statement on social media saying he would be extending lockdown until 3 May. He said he would ask the Central Intelligence Office (CIO) to investigate it and that if the person responsible was caught they should get “at least 20 years imprisonment” for “spreading falsehoods”.

“An example needs to be made,” the President said.

The CIO operates under the Office of the President. Many of Zimbabwe’s abductions, extrajudicial murders and enforced disappearances are said to be committed by the CIO. The head (minister) of State Security which oversees the CIO, Owen Mudha Ncube, was recently added to the US sanctions list for Human Rights violations. Emmerson Mnangagwa himself was the minister responsible for the CIO during the Gukurahundi genocide that left 20,000 civilians dead in Matebeleland.

Hearing the president take the trouble to publicly threaten whoever wrote the statement with CIOs was unsettling. We all feared the worst – not just for whoever the president was threatening but also for ourselves.

“Was this fake news after all and, will the fake news charge stick?” people asked.

On 20 April the Zimbabwe Republic Police (ZRP) tweeted that they had arrested Lovemore Zvokusekwa for “Publishing or communicating false statements prejudicial to the state as defined in section 31 (a) (i) of the Criminal law (Codification and reform) act Chapter 9:23”.

As the president had stated in the video this crime attracts 20 years in jail and because the president had vowed to make an example of this case, there was an outcry from the public. Some questioned the word “circulating” in the charge.

Did Zvokusekwa produce the letter or had he just circulated it as hundreds of other Zimbabweans had when the letter fell into their inboxes and on their timelines?

Were they going to find and arrest everyone who had forwarded the letter?

Some argued that the law Zvokusekwa was being charged with had long since been ruled to be unconstitutional by the constitutional court in the case of Chimakure vs the Attorney General, rendering the arrest and charge an illegality and an abuse of Zvekusekwa’s rights. Some simply asked – was it fake news that the lockdown had been extended when the president had in fact extended it?

All these questions did not stop the state from dragging Zvekusekwa before a magistrate on 20 April and remanding him in custody until 13 May – a total of 23 days.

Something to be laughed at

The case of Zvokusekwa, whose surname in Shona ironically means “something to be laughed at”, illustrates a dangerous trend seen elsewhere. Covid-19 has provided an excuse to authoritarians to ramp up the stifling of dissent. The destination of choice has been attacks of freedom of expression and the media.

In Zimbabwe, starting with the case of the late Zororo Makamba, the first person to test positive in the country, the government has been accused of manipulating information on the true status of infections and its response to it. The digital or social media space has been the go-to alternative for a country hungry for information. It has also been a revolutionary space for government criticism, exposure of corruption and other excesses and demands for accountability. That, it seems, is the space the government has its eyes on.

But it faces a dilemma.

The government itself needs the digital media space for its own propaganda. The national broadcaster, ZBC, maintains a Twitter handle which it actively uses to churn out propaganda. On the page they post stories about everything the president does as well as stories highlighting the “generosity” and “benevolence” of the president and the first lady.

For years the Zimbabwean government has used twin devilish and draconian pieces of legislation to stifle political activity and dissent and public criticism: the Public Order and Security Act (Posa) and the Access to Information and Protection of Privacy Act (AIPPA).

The former, in requiring police permission for public gatherings, has been used to stop opposition from holding its rallies, while the latter has been used to intimidate and prevent journalists from doing their work. When he tried to show potential Western investors that he and his government were different from the late former president Robert Mugabe, Mnangagwa promised to repeal the two laws. Replacement drafts have been tabled but are no different. Meanwhile, Posa was used in August 2019 to stop opposition protests.

It is now clear that while all attention has been focused on Posa and AIPPA, the real devil is in the Criminal Code used to arrest Zvokusekwa which is equally draconian but carries far more severe penalties.

The obvious glee by the president in announcing to a nervous nation his eagerness to set his dreaded CIO on a citizen and then send that citizen to jail for spreading falsehoods demonstrates the importance of this piece of legislation in the repression toolbox of the regime. The government’s intention to use the Criminal Code to turn up its autocratic volume during the lockdown was exposed by the Permanent Secretary of Information hours before the publication of the regulations establishing the lockdown, when he threatened that people would soon see themselves in jail for spreading falsehoods.

The Covid-19 statutory instrument did not disappoint, importing verbatim the entire provisions of the code related to criminalising the publication of falsehoods. What seemed lost to the government, which does not seem to respect its own laws, let alone its own courts, is that this entire provision of the Criminal Code was struck down by the constitutional court in the Chimakure case six years ago. The Minister of Justice cited in the case at the time was none other than Emmerson Mnangagwa, now president. Nothing demonstrates the levels of lawlessness and lack of accountability more than this. This is clearly a government that does not consider itself bound by anything or accountable to anyone.

It is clear that digital or social media will continue to be a new battleground for repression in Zimbabwe.

In the wake of Covid-19, the disastrous policy failures in the government’s response have been accompanied by allegations of shocking levels of procurement-related grand corruption and abuse of Covid-19 aid. Last week it was reported that a company run by (the president’s son) Collins Mnangagwa’s business partner, Delish Nguwaya, was awarded a $60-million contract to deliver pharmaceuticals related to Covid-19. The story was broken in digital media.

The Minister of Finance announced a programme to provide livelihood support via cash transfers to vulnerable households. The contract to disburse this money was awarded to a telecoms company closely linked to the political elite.

To make matters worse, the process to determine who is eligible for the government funding remains clouded in mystery. The only explanation the Minister of Finance gave was that they used a “complex algorithm” to select beneficiaries. With such opaque explanations and poor accountability, it is clear that even this money is likely to have been looted. In Covid-19 the government has found a new golden goose for its voraciously corrupt appetite.

In all this, the digital and social media space stands fast in ensuring that these scandals come to light, that the president is called to answer for his videos threatening citizens, the Minister of Health is asked to explain his policies and reports on Covid-19 and the Minister of Finance is asked to justify how government money is spent.

The power of digital and social media to counter state propaganda was also witnessed last week when the secretary of information posted this tweet:

“We received 65 Zimbabweans from the UK. Available place of quarantine is Belvedere Teachers College. They are refusing this accommodation demanding hotels. Govt can’t afford. Why come from a Covid-19 hotspot during a lockdown & demand posh facilities at stretched public cost?”

The returnees managed to expose the government lying by posting videos from the college where they were quarantined showing that the reason why they were asking to be moved to a better place was that there was no running water and more than 20 people were sharing just two toilets. The plan to deceive the public about why the returnees were rejecting the quarantine facility backfired terribly. The videos, by default, also served to expose the dire conditions under which students at the teachers’ college have been living in for years.

With a crumbling and discredited state media enterprise, the government needs the digital space. It will continue to need it for its propaganda, for PR exercises for the president and first lady and for Covid-19. But, with its tendency to capture and monopolise everything, it has yet to find a formula to control the digital media space beyond unconstitutionally switching off the internet. It has also yet to find a legal way to stop Zimbabweans from sharing information that exposes its failures besides provisions of the Criminal Code – struck down by the constitutional court but brazenly used to detain a civilian for almost one month.

In all this, it remains clear that if ever the falsehoods law was constitutional and anyone needed to be jailed, it would be the government and its litany of propagandists. It also highlights that in crying only for Posa and AIPPA to be repealed, citizens have ignored a greater danger – the devil is in the Criminal Code.

It is unacceptable that the president of Zimbabwe, who himself has never spent a single day in custody for any of his crimes – from genocide to looting minerals in the DRC and running down Zanu-PF companies as alleged by Mugabe’s administration before the coup – can arrest and threaten a man with 20 years in prison for circulating fake news that turned out to be true. DM/MC

Thandekile Moyo is a writer and human rights defender from Zimbabwe. For the past four years, she has been using print, digital and social media (Twitter: @mamoxn) to expose human rights abuses, bad governance and corruption. Moyo holds an Honours degree in Geography and Environmental Studies from the Midlands State University in Zimbabwe.