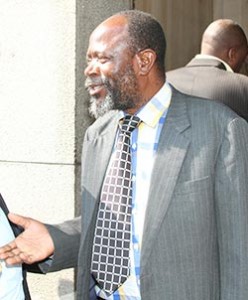 So, I read Emmerson Mnangagwa wants, or has already passed, a law that will cause those who peddle lies about Coronavirus to be arrested. Very nobble idea which is long overdue since Defence Minister Oppah Muchinguri told some ululating Zanu PF supporters that Coronavirus was invented by God to punish the Americans, and it only attacks the white people, not Africans. That is such a serious crime which leads to people being careless and contracting disease, especially given the reaction of her audience who fully believed in their “brainless” leader. If Muchinguri does not get arrested, then we will know that Emmerson Mnangagwa himself is fake news, and deserves 20 years jail.
But I am sure Mnangagwa will not touch Oppah Muchinguri, because after she peddled the falsehoods, she was appointed into Covid-19 Cabinet Taskforce, rendering his whole effort a huge falsehood on its own. Mnangagwa is just not serious, and a big joke himself.
Another candidate for arrest is MP Joseph Chinotimba, who also said Coronavirus was punishment from God for evil doing, likening it to the biblical Sodom and Gomorrah. Why was Emmerson Mnangagwa silent when Chinotimba was saying this? Emmerson Mnangagwa is just not serious.
Then came Mthuli Ncube, who was interviewed on television and said Zimbabwe was very prepared for Covid-19, and there was nothing to worry – wasn’t that a lie? And is Mthuli Ncube in jail? Another question for Mthuli Ncube is, you have just declared $1 billion surplus, yet we are told by Professor Mavima that citizens who are hit hard by Coronavirus are receiving just ZW$200 as support package. Shame on you Professor Mthuli.
And the chief culprit himself, Emmerson Mnagagwa, bans public gatherings to be reviewed 60 days from the day he made the declaration, and the following days addresses a Zanu PF rally. Turn yourself into prison Emmerson Mnangagwa, you are a national disgrace.
Post published in: Featured