Zimbabwe is looking within to beat Covid-19 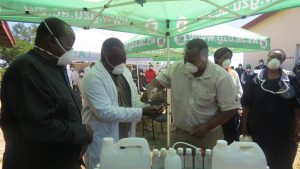 Zimbabwe’s spiral into economic chaos and uncertainty over the last decade has left the country with few functioning industries and an over-reliance on imports of nearly everything from food and furniture to building materials and even toothpicks.

The economic upheaval and notorious hyperinflation has decimated much of the country’s manufacturing base which in previous decades had been supported by its higher learning institutions.

Now that the country has been put on a 21-day lockdown to curb the spread of coronavirus after reporting eight Covid-19 cases and one death, the country has had to look within as it can’t compete on the global open market for imported gloves, masks and hand sanitizers given the huge demand.

There is additional pressure because hundreds of doctors and nurses in Zimbabwe have refused to work until they are guaranteed by health authorities there will be enough personal protective equipment for their usage. The Zimbabwe Zimbabwe Hospital Doctors Association has been asking for adequate equipment outlined in the World Health Organization’s guidelines including masks, eyewear and gowns.

These universities are located in various provinces around the country and they are supplying hand sanitizers, masks, gloves and other personal protective clothing to clinics, hospitals and security personnel in those provinces.

Higher education minister professor Amon Murwira told Quartz Africa the hand sanitizers, masks and gloves were made to meet the standards of the WHO and the Standards Association of Zimbabwe. “Universities are all where it starts. (Our) sanitizers are made to meet standards,” he said.

“We are supplying health-related institutions (such as) hospitals and clinics through the Health ministry. We are also targeting government institutions (including) police and other public interface institutions to combat the spread of the virus,” says Dr Clinton Musekiwa, marketing director at CUT.  He says the university is producing more than 2 000 masks per day and already supplied around 5,000 masks to several health institution with more orders from public health facilities and big businesses.