Maputo (AIM) – Zimbabwean President Emmerson Mnangagwa warned on Tuesday that any attack on a member state of the Southern African Development Community (SADC), including Mozambique, is an act of aggression against the entire southern African region. 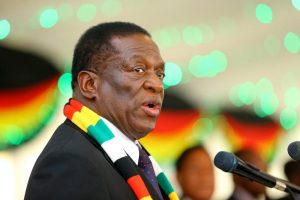 New Zimbabwean President Emmerson Mnangagwa delivers a speech during the swearing in of the new members of his cabinet at the State House in Harare. EPA Images

He was speaking at the end of an extraordinary summit in Harare of the Troika of the SADC body on defence, security and political cooperation called to analyse the military instability in some SADC states, particularly Mozambique which asked for the meeting.

“Any attack on one SADC member is an attack on the other members”, said Mnangagwa, who currently holds the rotating presidency of the troika.

In addition to Zimbabwe, the members of the troika are Botswana (Deputy President) and Zambia (outgoing President). Since Mozambique had requested the meeting. Mozambican President Filipe Nyusi also attended the summit.

“We met today, as a region, to face this challenge”, said Mnangagwa. “Together we are studying the challenge and finding ways of dealing with it”.

The challenge he was referring is the Islamist terrorism in parts of the northern Mozambican province of Cabo Delgado, which began with attacks on police premises in Mocimboa da Praia district in October 2017, and has since spread to several other districts, with the loss of hundreds of lives. The international terrorist organisation known as Islamic State (or ISIS or Daesh) has claimed responsibility for the Cabo Delgado attacks.

Nyusi told reporters it is urgent to unite efforts, share experiences and see what type of support the other countries in the region can offer to Mozambique.

“Here we have received great solidarity, great encouragement and together we are trying to exchange information about the realities of each country”, the Mozambican President added.

A statement issued at the end of the meeting said that the leaders strongly condemned the armed attacks and acts of sabotage carried out by terrorist groups in part of Cabo Delgado. They reiterated the SADC position of condemning all acts of terrorism, regardless of where they take place, in line with the SADC Declaration on Terrorism, and the African Union Convention on Preventing and Combatting Terrorism.

They urged all SADC member states to support the Mozambican government in its struggle against the terrorist groups operating in Cabo Delgado. The statement did not mention any specific form of support.

The summit also analysed the situation in Lesotho and Malawi. It called for “a peaceful transfer of power in Lesotho, in line with the provisions of the Constitution of Lesotho”.

As for Malawi, the summit merely “took note of the decision of the Supreme Court of Malawi to annual the Presidential elections held in May 2019”.

The statement said the SADC region remains “relatively stable, despite the occurrence of some worrying situations, including the acts of terrorism perpetrated in Cabo Delgado”.