Distress calls from journalists. Salaries slashed by 50 percent. Zimbabwe's media is not just struggling for press freedom – Covid-19 threatens to close it down much faster. With Zimbabwe in lockdown since 30 March, sales of hard copies of newspapers appear to have plummeted. Insiders say media houses have been valiantly churning out copy ‘”virtually for free”. But that can’t continue.

According to Tabani Moyo, director of the local chapter of the Media Institute of Southern Africa (MISA), “most of [the media houses] announced a 50 percent salary slash for their journalists. There will be a very bleak future post-Covid.”

Quoting a memo to workers, independent news website Zim Morning Post reported last week that “scores” of media workers, including those on fixed monthly retainers, had their contracts terminated at Zimpapers, the country’s biggest publishing company in which the government has majority shares.

The group publishes more than a dozen titles and runs a number of radio stations, including Harare-based Star FM and Capitalk 100.4 FM.

The biggest impact of Corona is while people are clamouring for lockdowns and “splendid isolation” to save lives, a disaster is being created in the process: economies and companies will suffer big time; some won’t survive. Media houses, e.g, in states like Zim and SA in trouble. 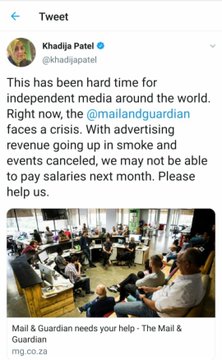 The cutbacks have still not officially been confirmed by Zimpapers – but journalists have echoed a story of slashed salaries and long-term career fears, similar of course to that being experienced by the media in many other countries.

Except Zimbabwe’s media was already in a vulnerable state: Its journalists poorly-paid in a sector still feeling the after-effects of devastating attacks on press freedom under the Access to Information and Protection of Privacy Act (AIPPA) brought in under former president Robert Mugabe.

“The pandemic came with a ravaging effect on an already-pressurised industry,” said Moyo.

A number of papers, including the privately-owned NewsDay, are sending out their editions as PDF files. Subscribers pay via mobile money – but at a fraction of the price of regular subscription rates.

STATE-owned media group Zimpapers has laid off scores of its employees after being hard-hit by the severe economic fallout wrought by the coronavirus pandemic, Zim Morning Post can report. In a…

State media still has access to government advertising. Things are much tougher for the privately-owned press.

“Their situation is more precarious than the public media,” said Foster Dongozi, the secretary general of the Zimbabwe Union of Journalists (ZUJ).

Precise figures of journalists affected are hard to come by. Dongozi confirmed that ZUJ had received reports of journalists being told by employers that “they don’t have any real need for them now.”

One reporter from a private daily newspaper told RFI that he’d had a 50 percent pay cut for April.

“You just have to try to think out of the box,” said the reporter, who asked not to be named.

“Many media houses are saying they don’t have money. Maybe by the beginning of next month, once we finish this lockdown, things will be better. We hope for the best.”

An 18 billion Zimbabwe-dollar stimulus package (around €368million) announced by President Emmerson Mnangagwa last week does not appear to benefit the media.

“Some (papers) might shut down if there is no stimulus intervention,” said Moyo, the MISA-Zimbabwe director.

If that happens, the media sector faces the prospect of being dragged back 20 to 30 years, when Zimbabwe did not have strong and diverse media ownership.

“In the era we’re operating in where there is rampant corruption… you need a robust independent media that keeps the checks and balances on behalf of the citizens.”