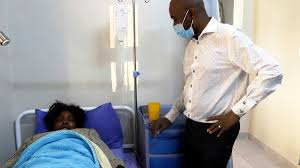 Zimbabwean opposition leader Nelson Chamisa, right, visits an activist who was reported missing, at a local hospital in Harare, Friday, May 15, 2020. Three young Zimbabwean opposition activists who were reported missing following a protest over COVID-19 lockdown measures this week were been treated at a hospital Friday after asserting they were abducted and sexually abused. (AP Photo)

The MDC Alliance is dismayed by the recent cynical statement by the Minister of Foreign Affairs and International Trade, Sibusiso Moyo that attempted to cast doubt on the abductions, and callously insinuates they were ”stage-managed-theatre,” while at the same time claiming that the government takes the allegations seriously and is investigating them.

Such reckless and dismissive statements by the executive severely undermine the credibility of any regime-led investigations.

The regime’s disingenuous statement comes after the Zimbabwe Human Rights Commission, a constitutional body mandated to receive and investigate complaints of violation of human rights from the public, confirmed the abductions, torture, and sexual abuses, as fact.
Joana Mamombe, Cecilia Chimbiri, and Netsai Marova were initially arrested by the police at a roadblock on the 13th of May 2020 and taken to Harare Central Police Station where they were handed over to the abductors.
The arrest of the three was confirmed by the National Police Spokesperson Assistant Inspector Paul Nyathi to State-run newspaper, The Herald and the privately-owned Daily News on the 14th of May 2020.

In addition, the vehicle that was being driven by Joana Mamombe at the point of arrest is still parked at Harare Central Police Station.

The MDC Alliance is extremely concerned that the Police Forensic Department took inappropriate pictures of the three women for the purposes of ‘investigations’ but the photos were leaked and found their way  on social media, thereby further victimising and traumatising the victims.
Such unprofessional conduct by the police speaks volumes on the captured nature of Zimbabwe’s institutions and the ability of the same police to conduct professional and thorough investigations.
The horrific abuses that the three women suffered are a violation of the Zimbabwe Constitution which strictly prohibits torture, cruel, inhuman and degrading treatment, and guarantees personal security and dignity of all citizens.
Zimbabwe is party to the African Charter on Human and Peoples’ Rights on the Rights of Women in Africa (Maputo Protocol) which guarantees women’s rights, their participation in political processes, protection against violence and punishment of perpetrators.

In addition, the African Charter on Human and Peoples’ Rights prohibits torture and cruel, inhuman and degrading treatment.

The ordeal of the three women are also a violation of the Convention on the Elimination of All Forms of Discrimination against Women, Convention Against Torture, Convention for the Protection of All Persons from Enforced Disappearances and the Universal Declaration of Human Rights.
The abduction of the three young women is part of a growing list, the MDC Alliance recorded a total 49 abductions since August 2018 targeting opposition leaders and activists.

Invariably, all these abductions were carried out by armed men with rifles who targeted victims for being opponents of the government.

So far, inexplicably, there has been no single arrest of any of the abductors.

The abductors continue to act with impunity.

Similarly, the perpetrators of the 1 August 2018 killings in Harare of six individuals in post-election protests were never prosecuted despite recommendations of the Motlanthe Commission.

In January 2019, a further 17 killings and 17 cases of rape were conducted by security forces with impunity.

Indeed, the ever-increasing number of such cases of State-sanctioned impunity only serves to expose the so-called “New Dispensation” as a charade that may even be worse than the previous regime led by the late President Robert Mugabe.
The perpetual cycles of human rights abuses and impunity, and reckless statements by the executive, point to compromised justice institutions with no capacity or independence to conduct thorough investigations and produce a robust and true account of what happened to the three MDC Alliance Youth Assembly leaders in a way that ensures that justice is served.
We demand justice for the three young women. Those who committed these horrendous deeds must account for their actions. It is time to break the cycles of abuse and impunity.