Now the Government Wants to Jail Them 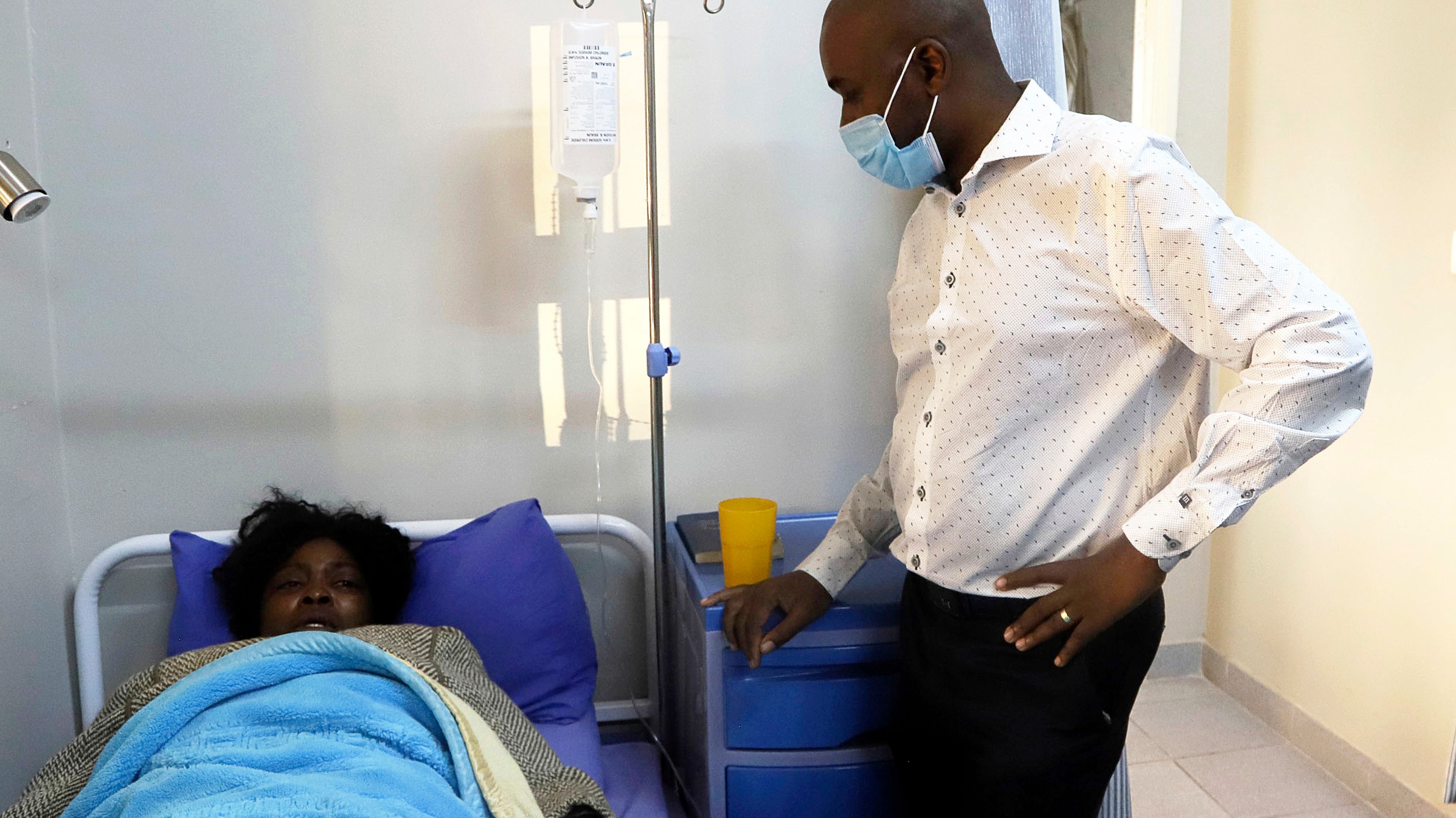 Zimbabwean opposition leader Nelson Chamisa, right, visits an activist who was reported missing, at a local hospital in Harare, Friday, May 15, 2020. Three young Zimbabwean opposition activists who were reported missing following a protest over COVID-19 lockdown measures this week were been treated at a hospital Friday after asserting they were abducted and sexually abused. (AP Photo)

This article originally appeared on VICE US.

Three members of Zimbabwe’s main opposition party were abducted from a police station last week, and then beaten, tortured, and sexually assaulted with firearms before being dumped on the side of the road.

Now, rather than pledging to find the perpetrators, the government is threatening to jail the women for breaching coronavirus lockdown measures.

Activists and opposition leaders say the government and police are mounting a smear campaign to cover-up collusion with the attackers, a campaign that includes allegedly leaking semi-naked images of the victims on social media and calling them prostitutes.

While the government’s reaction to such a heinous crime may seem inexplicable, for those who track Zimbabwe’s politics, it is nothing new.

“To those who have followed events in the country — and certainly for Zimbabweans themselves — the flippant and entirely callous response is par for the course,” Jeffrey Smith, executive director of Vanguard Africa, a nonprofit that focuses on democracy in the continent, told VICE News. “Victim blaming, or otherwise accusing an imaginary ‘third force’ for their own crimes, has long been the regime’s modus operandi.”

On Wednesday, May 13, Joanna Mamombe, 27, a member of Zimbabwe’s Movement for Democratic Change (MDC) and a lawmaker for the Harare West constituency, was driving home from an unsanctioned protest against the government’s inadequate provisions for the country’s poorest during the coronavirus lockdown.

Also in the car were two other activists from the MDC’s youth assembly, Cecilia Chimbiri and Netsai Marova.

They met a police roadblock and were ordered to drive the car to the Harare Central Police Station.

In a basement parking lot at the station, armed and masked men forced them into a van and told them they were going to be “fixed” for rebelling against the government.

The three women were tied up and their heads covered with hoods. They were driven for an hour into the forest.

The women say they were thrown into a pit, beaten, stripped naked and sexually assaulted with firearms. They also said they were forced to drink each other’s urine.

“They beat me on my back, all over the body using sticks. They used a gun to beat us, then molested me,” Chimbiri told the Guardian from her hospital bed.

On Thursday night, May 14, the three women were dumped by the side of the road from a moving car near the town of Bindura, about 50 miles northeast of the capital before being discovered the following morning.

“They pushed [us] out of the truck onto the road. They left us there. They said ‘we will be watching you… What is so special about you that you want to turn against the government?’” Chimbiri said.

The government’s response, rather than pledging to find and punish the perpetrators, has been to accuse the women of lying.

The police, having initially confirmed the women’s arrest, then denied they were detained. But the presence of Mamombe’s car at the police station undermines the police’s claims that the women were not detained.

Justice Minister Ziyambi Ziyambi told the BBC the women made up the story to deflect attention from the fact that they broke lockdown rules by attending a protest, and threatened to prosecute them.

“It is a diversionary tactic and once they are discharged [from hospital] they must be arrested for breaking the law,” Ziyambi said.

Worse still, Energy Mutodi, a deputy information minister, alleged the three women were simply meeting their lovers and that a row erupted overpayment for their “services.” Mutodi has since been fired, though it is unclear if his dismissal was related to his allegation about the women.

Then, photos taken by the police, allegedly as part of their investigation into the attack, appeared on social media. The semi-naked photos of Chimbiri were taken as part of the evidence-gathering process.

On Wednesday, Chimbiri’s lawyer wrote to Zimbabwe’s police chief to demand a full investigation into how the photographs were leaked and by whom.

The identity of the assailants is unknown, but the MDC claims the attackers were working in collusion with the state, and one of the victims said she would identify one of the men who attacked her.

“This is inhuman and degrading treatment,” Nelson Chamisa, the party’s leader, told ZimLive after visiting the women in the hospital. “This is torture against girl children, torture against the country. Assuming that they had committed a crime, they were supposed to be taken to a police station, tried, and sentenced. But this is a continuation of an ugly past.”

But given the past four decades of Zanu-PF rule, first under Robert Mugabe and now under his former deputy Emmerson Mnangagwa, there is little hope of justice for the three women.

“Like the routine gaslighting of women’s experiences in Zimbabwe, impunity has also long been the norm,” Smith said. “Authorities will continue to deny their role in the abductions and the torture. And the perpetrators will not be held accountable, further emboldening an already vicious, ruthless regime.”