Zimbabweans who overstayed their temporary permits due to South Africa’s coronavirus lockdown have been banned from re-entering, despite promises of exemptions. 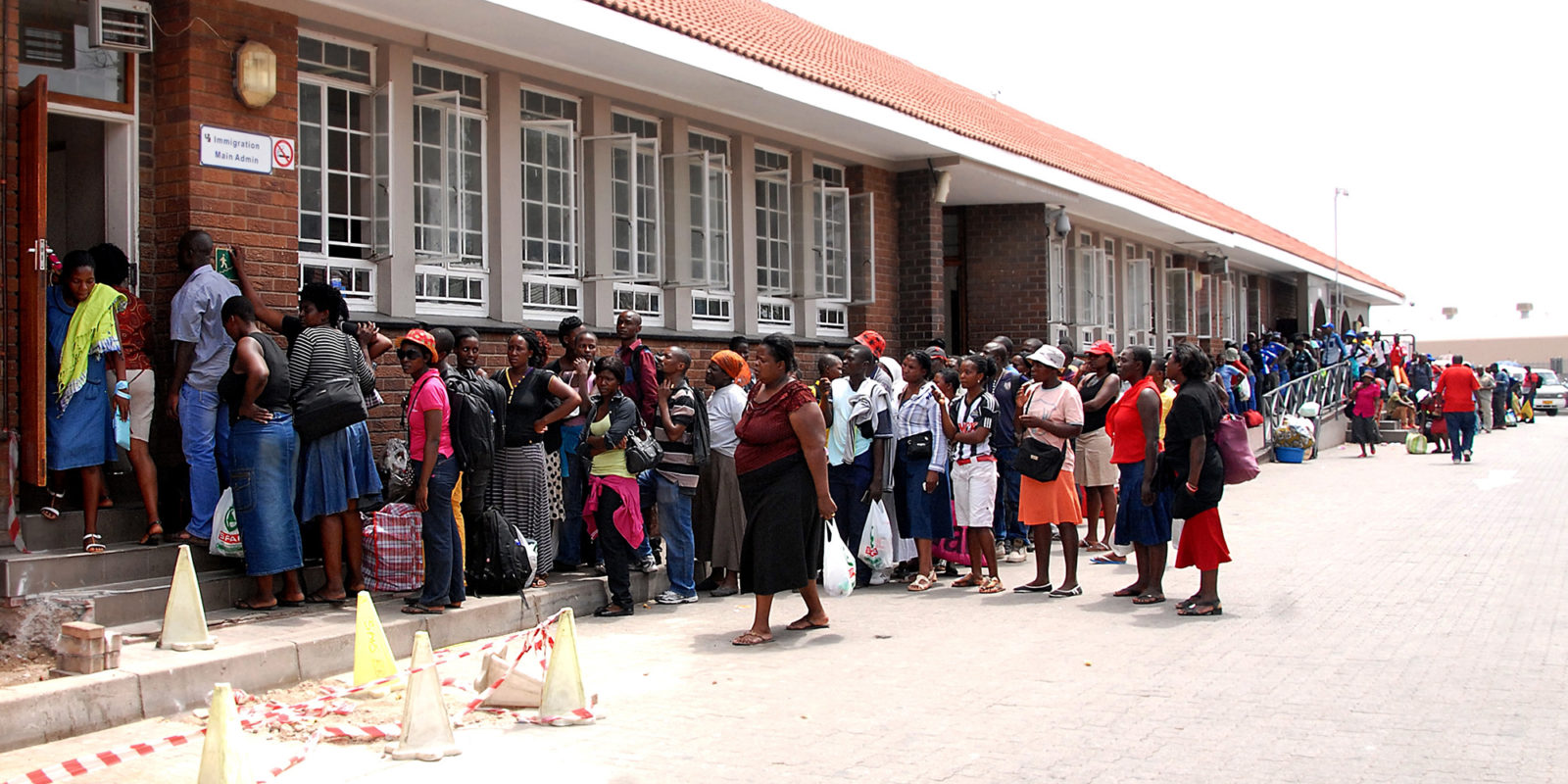 Zimbabweans who overstayed their temporary permits due to South Africa’s coronavirus lockdown have been banned from re-entering, despite promises of exemptions.

Some of the Zimbabweans who made use of specially arranged buses over the weekend to return home were shocked when they were told by officials at the Beitbridge border post that they could not return to South Africa for five years. This seems to be contrary to a special arrangement that was announced in March and published on April 14 on the Department of Home Affairs’ website.

One woman, who returned home on Saturday 16 May and who sent a picture of her documents to Daily Maverick, was given a paper stating that the reason for her five-year ban is that she has “overstayed by 37 days, at a time”. She was declared an “undesirable person”. This is despite a statement by the government saying holders of visas “which expired from mid-February 2020” and who did not renew their visas before the lockdown, “will not be declared illegal or prohibited persons”.

The woman was among 200 Zimbabweans who made use of buses sponsored by South Africa-based Zimbabwean businessman Justice Maphosa to facilitate those who wanted to return to Zimbabwe but who were out of pocket. She said when they got to the Beitbridge border post, those with expired papers got an unpleasant surprise.

She said she had been in South Africa to visit relatives and “got stuck” because of the lockdown. The woman is currently undergoing 21-day quarantine with a group of fellow travellers at the Masvingo Polytechnic, a government-owned college.

Asked whether she would have stayed in South Africa if she had known about this ban, she said: “Because of the situation down there [in South Africa], I think people will sacrifice and they will say they have no passports, and cross the border as border jumpers without passport,” she said.

Like many South Africans, Zimbabweans living here have been without an income for over a month now due to the lockdown, but many of them are not entitled to the relief measures announced by the South African government. There is anecdotal evidence that, outside of the lockdown period, this kind of border jumping has been the standard procedure for Zimbabweans who have overstayed their permits in South Africa.

The woman said the same ban was issued to some of her compatriots who paid R600 each to return on chartered buses last week, and the week before there were similar reports in the local media when 141 Zimbabweans returned home. There were also claims on social media of delays at the South African border of up to 16 hours, and of longer delays for vehicles transporting goods.

A Zanu-PF MP from the Beitbridge East constituency, Albert Nguluvhe, was quoted as saying these bans might have been an “overreaction” by South African immigration officials because some of those among the early returnees were shoppers caught up when the lockdown commenced. An official government spokesperson was less sympathetic. Permanent Secretary in Zimbabwe’s Ministry of Information, Publicity and Broadcasting Services, Nick Mangwana, tweeted on May 10:

Department of Home Affairs spokesperson Siya Qoza said the department would not penalise people who were in the country legally and whose permits expired during the lockdown period.

“Such people are allowed to leave without being barred from returning to the country,” he said. He was also in the process of making inquiries about what had happened in the case of the woman mentioned earlier. Qoza added that travellers can appeal the ban within 30 days, making use of the email address on the document they were given.

Zimbabwean leaders earlier said there are about 3,000 nationals in South Africa who indicated that they wanted to return. It is thought that there are over a million – and as many as three million – Zimbabweans in South Africa at any given time. Two weeks ago the department sent home 570 Zimbabweans who were held at Lindela repatriation centre in Krugersdorp following a riot there. Home Affairs Minister Aaron Motsoaledi told SABC that he summoned the Zimbabwean mission to take care of the deportation.

Meanwhile, the Zimbabweans who returned over the weekend said they are being treated well at the quarantine facilities.

“We got food and we got blankets,” a grandmother said by phone, but she expressed concern about coping once she gets back home. “Here in Zimbabwe, there is hunger here. What type of food parcels are they going to give us?” she said.

The Zimbabwean ambassador to South Africa, David Hamadziripi, said his country did not have the resources to help everybody, but the most destitute were able to apply for help.

Maphosa this week pledged to help those in quarantine with 400 food parcels once they are released home. He has also given another 700 parcels, including 25kg mealie meal, rice, sugar and cooking oil, to the elderly and orphans in Gwanda in Matabeleland South province where he was born.

“As I remember people struggling, I remember my own community as well where I grew up,” he said. Maphosa said he bought the food with the money he put aside last year after cancelling the annual fireworks display at a gospel festival in Gwanda, sponsored by him.

“Last year we did not do fireworks. I felt it in my spirit that we cannot display such opulence in fireworks. The reason why we did fireworks is if this God is so angry with us that he has moved far away from us that we cannot access him we need to illuminate ourselves, that when he sits in heaven he will say, ‘What is happening down there, Jesus Christ, Holy Spirit, let’s go!’ and he will find us worshipping him.

“But then last year we realised there was a lot of pain in Zimbabwe, a lot of unemployment, a shortage of petrol, long queues, people unable to access money from the bank, and we were saying, you cannot go to such a community as a normal person and go and have a party, praising God.” He said instead, he put away the money so that it could help people later.

A blind pensioner from Gwanda, Bellinah Malunga, whose identity document indicates that she is 94 years old, said she was “in shock” after receiving the food parcel.

“I was barely surviving [before]. My children would assist here and there, but lockdown has restricted my children from working and things have been difficult for us,” she said. “I didn’t know who to call upon for help. All I could do was pray, and this is an answer to my prayers.”

Maphosa became well known when, at the end of 2017, he helped Emmerson Mnangagwa escape from Zimbabwe ahead of replacing former president Robert Mugabe, who was forced to resign from office. A few months later the Mail & Guardian reported that Maphosa’s ICT business was being investigated by the Hawks in connection with a multimillion-rand tender from a North West municipality.

He was also convicted in the criminal crimes court in Pretoria of defrauding the South African Revenue Service by submitting fake tax invoices for his companies, Big Time Strategic Consultants and Computer Ink and Media Solutions. DM