Yesterday the first auction of US dollars was conducted by the Reserve Bank of Zimbabwe. The Bank had invited bids from business organisations and just under 100 responded via their commercial Banks. 17 of the 19 Registered Banks participated. 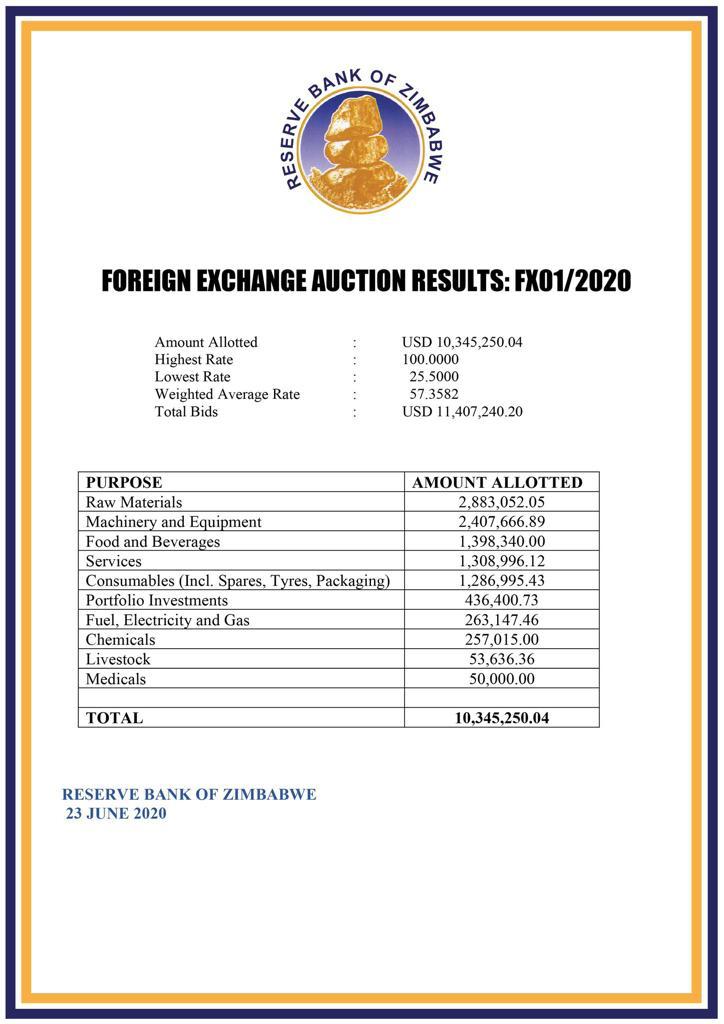 Total bids amounted to US$11,4 million and the bids ranged from 100 to 1 to 25 to 1. After scrutiny the great majority of bids were accepted and paid. The weighted average rate of exchange was 57 to 1. The Bank allocated US$10,4 million to the successful bidders at a cost of Z$600 million.

Members of the MPC and the PAC attended the process and we were able to scrutinise all applications and observe the process. We were completely satisfied that it was both transparent and open.

We were briefed by Bank staff and the Governor who said that the objective of the exercise was to try to restore confidence, stimulate and support the productive sectors of the economy, restore the value of the local currency and stabilise prices. It was noted that all users of hard currency for legitimate business purposes and representing formal business organisations registered with Zimra, would be able in future, to apply for their currency needs via their Commercial Banks.

It was noted that once a bid had been accepted by the Banks, it could not be withdrawn and that all applicants had to meet the requirements laid out in Exchange Control Circular number 175 which was available at all Banks for guidance. In addition, the Reserve Bank Website was up to date in this regard and all required forms available electronically for completion with submissions. It should be noted that all applicants are required to have adequate RTGS funds in their accounts at the time of application and that these funds will be debited automatically after adjudication.

The introduction of this system replaces the previous dual exchange rate system with the Bank applying a fixed exchange rate to all retentions and allowing all others to source their needs from the open market in one form or another. All liquidations of foreign currency by the Reserve Bank from all sources will now be conducted at the auction rate fixed every Tuesday at the Bank. This means that the Reserve Bank will no longer allocate hard currency to the private sector for whatever purpose at a discounted rate. The market rate, represented by the outcome of the auction every Tuesday morning, will be the only rate recognised for formal sector trading.

It is clear from the experience yesterday that all Banks and businesses were cautious and reserved when trying out the new system. It is expected that the number of applications and the total quantum that will be handled next week on Tuesday 30th June, will be significantly greater. This will test the Banks ability to meet demand. However, if it is able to meet demand then we can expect the auction rate to start to have a significant impact on open market rates and the informal sector.

With effect from today the 24th June, fuel prices have already been adjusted to the new rate and all Bureau de Changes will be able to use this new rate as the basis for their transactions. We expect Bureau business volumes to increase very substantially over the next quarter. It should be noted that the Bureaus are now authorised to buy and sell currency at these new market rates and that they are able to meet demand for small sums of hard currency from the public and the informal sector. This includes holiday allowances and school fees as well as medical costs and cross border traders.

Should these new arrangements result in exchange rates settling down at a more market related level, it is hoped that retail prices will start declining to reflect the lower cost of doing business. Individuals and companies with goods and currency bought at the much lower exchange rates that have applied recently will have to manage the situation very carefully.

Changes to the Gold Trading system also introduced recently will allow market prices to rise to world market levels, reduce smuggling and reduce demand for USD for trading purposes. It is hoped this will further strengthen the market system and allow exchange rates to reflect market realities. The decision by Government to pay Civil Servants a hard currency allowance by means of a preloaded electronic card is also welcome but it puts pressure on the private sector to ensure they are able to accept such cards for all transactions. If they can, then this will further strengthen their ability to trade electronically in hard currencies at points of sale and at the same time increase their earnings of hard currency for their Nostro accounts.

In my view these changes represent a real step forward for Zimbabwe in trying to stabilise its currency and restore the economy to real growth.