Harare: The Anti-Corruption Trust of Southern Africa (ACT-SA) is deeply concerned with reports of an increase in alleged corruption by ZRP officers, ZNA soldiers and the Municipal Police, and the District Development Coordinators’ offices among others. 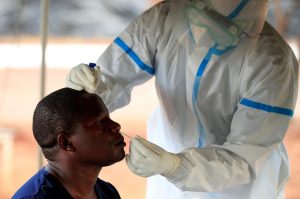 If not curbed, corruption by these corrupt public officials may reverse the gains made and putting all investment, including donor aid to waste. A research conducted by ACT-SA has confirmed that ZRP officers, ZNA soldiers, and Municipal police are soliciting bribes in exchange for giving a blind eye to violations of the COVID-19 regulations as well as helping all those arrested to enjoy freedom. Also implicated in corruption are the Offices of the District Development Coordinators (DDCs) country-wide.

ACT-SA has shown in its report that the national lockdown declared by President Emmerson D. Mnangagwa, pursuant to the Public Health (COVID-19) Prevention, Containment and Treatment (National Lockdown Order, 2020), has unfortunately and shamefully presented an environment ripe for public corruption.

Mr. Obert Chinhamo, the Director of ACT-SA has expressed disappointment that the management of the ZRP is not doing well in responding against corruption by ZRP officers and instilling a culture of integrity within the police service.

“What is clear from these recent developments is that the Commissioner-General of Police is still harbouring corrupt ZRP officers. And he has for a long time been too lenient when allegations of corruption are leveled against ZRP officers. More often, we have witnessed all those accused of corruption and other malfeasance being transferred from one station to the other where they continue with their immoral activities. I think the management of the police should be very strict in its approach. This lockdown has exposed the epidemy nature of corruption in the police similar to the levels, even exceeding the levels it had reached during the Augustine Chihuri era” he says

Mr. Chinhamo added that the heavy fines for violating the COVID-19 regulations are part of the corruption problem.

“We have also observed that corrupt ZRP officers solicit bribes that are less than the gazetted fines. That’s how these corrupt public officials lure their clients to pay the bribes. The heavy fines are actually being used as bait by these corrupt officials. Accused persons thus prefer to save money by paying bribes instead of paying those heavy fines. If they were lower, accused persons would simply pay the fines without any problems.” he says

A leading South African based human rights lawyer Advocate Gabriel Shumba, who is also one of the ACT-SA Trustees, had this to say:

Advocate Shumba called upon the government to ensure that laws and policies are fully implemented:

“Laws and regulations on corruption busting are not an end in themselves. Implementation and enforcement are critical. Government, ZACC, and civil society must strengthen partnership to ensure good governance, especially in so far as the protection of whistleblowers is concerned” he says

The ACT-SA report also lambasts the Government of Zimbabwe for giving empty promises, especially to the micro, small to medium enterprises and the general populace. Food aid and rescue packages were not given to the people as promised.  Hunger forced people to venture out of their homes in search of food where they met these corrupt public officials.