Lockdown fuels food shortages in Zimbabwe, one of the world’s poorest countries. 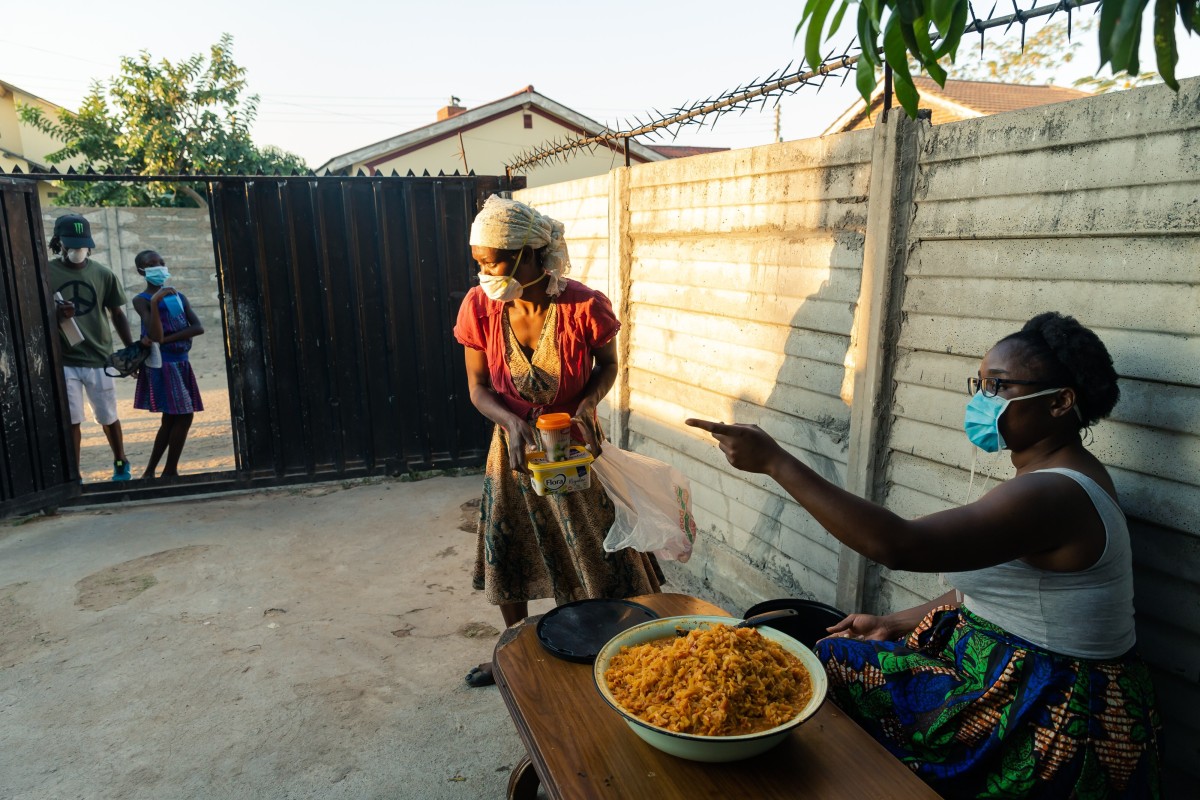 Samantha Murozoki (R) hands a free meal to a woman from her home in Chitungwiza, a satellite town of Zimbabwe’s capital Harare. Photo: AFP
When Zimbabwe went into coronavirus lockdown in late March,
it hit the country’s working poor hard. No economic activity meant no work, no money and little to no food.

Unemployment before the outbreak was already rampant in Zimbabwe, one of Africa’s poorest countries. Almost 80 per cent of its 14.5 million people work in the informal sector, like street vendors and food stalls – trade that has virtually stopped in the lockdown. Many people are struggling to put food on the table and government help has not yet reached them.

Zimbabwe is still grappling with the effects of a devastating drought last year when it was also listed 109 out of 117 countries on the 2019 Global Hunger Index, a ranking considered “serious”.

The United Nations has warned that the coronavirus pandemic could push millions in Africa into extreme poverty and lead to famines of “biblical proportions” within months if immediate action wasn’t taken.

The situation has forced people in Zimbabwe to seek food wherever they can, even scraps from rubbish.

Samantha Murozoki, a lawyer from Chitungwiza, a satellite town of Zimbabwe’s capital Harare, took pity on her hungry neighbours and started serving porridge to hundreds of children and adults, paid for out of her own pocket.

“I started feeding 24 people using my own groceries, but the number kept on rising daily beyond my resources. I sold a few belongings and now, well-wishers are assisting us. Most of the beneficiaries are informal traders or their children, cross-border traders, and children of parents in the diaspora,” she told South China Morning Post.

Others have joined the cause. Sisters Sandra Chikwama and Caroline Bushu from Harare’s poorest suburb Epworth, started a similar meal scheme after seeing children eat rotten food at local dump.

“It made us realise that many people were silently starving. So, we started to cook porridge for 45 children using our own stocks. We are now serving 300 children and each day. We wake up to more numbers. We have added supper,” Chikwama said.

Nyarai Nyamande, a goods vendor and mother-of-four whose income has been wiped out since the lockdown said food kitchens helped her family. “I last bought subsidised meal two months ago and I don’t have US$6 to buy a bucket of maize. My four children are getting free food from the kitchen and when they come home, they just sleep.”

Terrence Mugova from Bulawayo, Zimbabwe’s second largest city, feeds about 4,000 households a month through his TangoTab Feed the City Initiative.

He said he has served more than 92,000 meals since July 2018 and demand for his free food has increased since the lockdown.

“We estimate that there are over 10,000 households needing ongoing food assistance. There are many people who have become vulnerable because they can no longer earn an income,” he said.

Zimbabwe has experienced some of the harshest droughts in decades, but its situation has been compounded by currency and fuel shortages, low agricultural output and hyperinflation at 760 per cent that has made food prices unaffordable to many people.

The UN estimated that 7.7 million people, almost half of the country’s population, were food insecure, meaning they lacked reliable access to a sufficient quantity of affordable, nutritious food. More than 4 million of them live in rural areas and millions in towns and cities survive on less than US$1.25 per day.

The World Food Programme (WFP) is leading humanitarian efforts to feed millions in Zimbabwe and has warned of more food shortages.

“The impact is glaringly significant in the urban areas and Covid-19 is one of the main contributing factors,” said Eddie Rowe, WFP’s Zimbabwe country director.

“The government has locked businesses and daily lives and we know that 80 per cent of the population engages in informal activity which allows them to access daily income that sustains their food needs.”

Rowe said the WFP was extending its assistance until at least April 2021.

“By January, we assisted 2.7 million people and then scaled to 3.6 million people from February to April covering all 60 rural districts. In the urban areas we were aiding about 100,000 people with monthly cash assistance in eight domains,” he said.

The WFP needs US$260 million to continue providing food assistance to Zimbabwe up to December 2020 and cash assistance until April 2021. It needs US$15 million for protective personal equipment for its frontline workers and awareness campaigns.

The government aims to give US$7 handouts to a million people from this month. With WFP help, it has provided food assistance to more than 1.3 million households, but this has not been enough.

Zimbabwe has reported 282 confirmed Covid-19 cases and four deaths, but the actual number could be much higher because of limited testing.

Tonderayi Mukeredzi is an independent journalist from Harare in Zimbabwe