One thing that we all have to bear in mind is that if you do not remember the mistakes of our past, you condemn us to making the same mistakes again. This is true in life, true in business and in the life of nations. History is littered with examples of this truth. 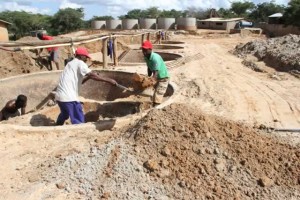 If you read Greek history from several thousand years ago you quickly discover that not a great deal has changed since then, we are still the same sort of beings and still make the same mistakes. We should know by now what works and what does not. One thing that towers above most other truths is that you cannot buck the markets, the image of King Canute sitting on the beach and defying the tide is just one example of how stupid the powerful and the mighty can be.

In the early months after the turn of the Century, a de Beers geological team found evidence of diamonds in the alluvial sands of Marange in Zimbabwe. Previously we had found diamonds on the banks of the Limpopo and lower down the Sabi River Valley. This discovery was nothing like those, it was alluvial in character and in 2006, when the company decided to abandon their discovery a small group of investors in London took the claims over and within weeks found gem quality diamonds.

In days they fell afoul of the Ministry of Mines, the very agency that is supposed to protect our national interests. They were driven off their legally acquired claims and their discovery handed over to the people of the District. Well and good until those who were in power at that time discovered how rich the area really was. In 2008 the army moved in and forcibly removed thousands of small scale miners who were making a living by excavating the sands by hand and sorting out the diamonds for sale.

By 2012, half a dozen companies were on site and satellite images of the area showed over 60 000 hectares of alluvial deposits under exploitation. The same images showed an air strip with a control tower and heavy equipment on site. It was clear this was no small operation.

Information obtained from workers on site, revealed that the machines on site were processing thousands of tonnes of sand daily and producing millions of carats of diamonds. Over 80 per cent were of little value but 15 to 20 per cent were gem quality and one such diamond, a clear yellow stone, was sold in the Far East for US$11 million. A computer disc obtained from Mbada Diamonds controlled by the State President, showed that they were extracting diamonds in large quantities and listed the grades and prices obtained.

A simple extrapolation of these numbers across the whole site using the volumes being processed by the equipment involved, yielded an extraordinary result – annual production could exceed US$4 000 000 000. In the period from 2008 to 2017 it is now estimated that some US$23 billion in diamonds were extracted from this site. At its peak it was supplying a third of global demand and forced a worldwide reduction in diamond prices to the detriment of other producers, especially Botswana.

About a third of this value was absorbed by costs but it still meant that diamond revenue to the value of US$15 billion simply vanished. It caused a national scandal when the aging President of Zimbabwe, Mr Mugabe, stood up at a rally and said that this money was “missing”. They were never able to erase that mistake – but the “old Man” – always very sharp in these matters was spot on.

Our national debt is US$11 billion, our budgets for health and education are minuscule when compared to these revenues. In Botswana where the annual sales from their mines are about US$3,5 billion per annum and it’s all hard rock mining, they give their people free education and tax rates are low. The mines are run to the highest standards and two thirds of the net revenues accrue to the State. Here, the benefit to the country was very limited and revenue to the State almost zero.

In the late 1800’s Cecil Rhodes brought one of the top geologists in the world to Zimbabwe. After touring the country, they returned to Bulawayo where this gentleman told Rhodes that the real wealth in Southern Africa was under land to the East of the discoveries at the Witwatersrand. He said that there was a lot of gold in Zimbabwe but it was in pockets and not on the same scale. Rhodes returned to South Africa and bought the farms indicated by the Geologist. They became one of the greatest discoveries of gold in history and created huge fortunes and founded the modern State of South Africa and the Gauteng industrial complex that today generates a third of the total GDP of Africa.

A hundred years later, driven by desperation and the need to make money, thousands of Zimbabweans rediscovered what Rhodes had ignored – the vast areas of gold bearing land – the so called Green Belts, that crisscross the country. They began digging holes and found gold, 2 to 15 grams per tonne. They panned the rivers and found more gold, soon a whole industry sprang up of millers who took in the ore excavated by these miners and produced the coarse gold which could be assayed and sold.

Today we estimate that over 500 000 small scale miners operate. We have no idea what they produce but we know a network of criminal gangs has sprung up and the buyers use whatever means are necessary to control the sale of the precious commodity. If they only produce a gram a week – its gold worth US$1,4 billion. It is clear that the real output is much higher than this. Rumours and gossip from South Africa say that they handle 80 tonnes or more from Zimbabwe at their refineries. The Reserve Bank bought over 25 tonnes last year and this would put gold sales from Zimbabwe at over US$5 billion a year. Bigger than Marange.

Instead of this wealth finding its way to the Miners and their families, they receive only a fraction of the value of their hard earned production. A recent study says they get less than half the world market price. Fortunes are being made, but by who?

Once again our natural wealth is being squandered by corrupt and powerful individuals and we continue to wallow in poverty and hunger. This is a country that is rich in resources, they say that the resources per capita in Zimbabwe are greater than those found in Saudi Arabia – probably the richest country in the world. We are not alone; Venezuela is in a similar situation. Throughout history examples of similar squandered opportunities litter our records.

What is the lesson for us – the lesson is that our problems are solvable and the Presidents goal to make Zimbabwe a middle income State in 10 years, is no pipe dream. It can be done, but only if we stop making mistakes. The chaos in our fuel industry is just because we think we can defy market forces, that is a battle we are losing, can never win.

If we sorted out the gold industry we would have more hard currency than we can spend, we would not need the IMF or to put out a begging bowl, we could sort out our creditors and stand proud again. At the same time, we could do what many other countries have done – lift our people out of poverty and give our children a future.

But it will only happen if we stop making the mistakes of our past, even now.