It’s not so long ago that the resistance sounded like revolutionary songs and was comprised of dusty, sweaty youth who knew that the cost of freedom is high and must be paid for in blood or death if need be. 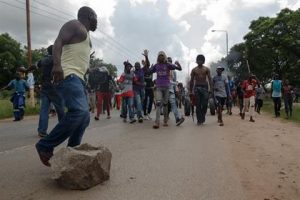 Today, the struggle is something a little different, something a bit more individualistic and extensively commercialized. What once was the sound of unified voices passionately singing toi-toi rhythms in the streets, has been replaced by the menacing sounds of silverware in conflict with ceramics and fine china in uptown conference rooms. As Africa Day comes near, I write this article in a reflective mode.

Africa, the great continent of resistance whose independence was obtained through the blood and death of the young women and men of past ages, seems to have fallen asleep. The independence of African came and we put our tools away. The young were put in schools and we thought we could educate the poverty and corruption away. The young were put into churches and we thought we could pray the oppression and impunity away. We thought because we had become independent, we had become free and so we stopped in our tracks, consumed by the competitive need to accumulate which then destroyed our ethos and moral compass as a people. What is left are fragments of a struggle and resistance that once was. What is left are the dry bones of the dead heroines and heroes of the past, who had powerful and magnetic dreams of the future that they died for.

A future that has turned out to be a nightmare for their children, because their children inherited the dream but they also were lazy, timid and had an unwillingness to pay the price for this dream to materialize. The alchemists believed that for one to gain something in the universe, they must in-turn exchange something of equal value. What we want is a peaceful and prosperous Africa, but consistently we don’t want to pay the price to get to this Africa that we want.

One of the greatest things that depresses me to this day is our mockery of manifestations of courage. When we see young people who are outspoken and active, the natural impulse is for us to warn them of all the dangers that lurk around them. We have extinguished our passion to celebrate courage and the spirit of resistance. All around Africa, we live in fear and fail to act and confront evil regimes because we fear for our lives. What is life without freedom? What is life without dignity? What is life without hope?

It is important that the youth of Africa realize that the burden to make Africa great rests upon us. The struggle and resistance must not be restricted to workshops and conferences. It must now start to manifest itself in our communities and our streets. It must not exist only in speech, but in action and a willingness to pay the price of freedom in its fullest. Assata Shakur once said, “Nobody in the world, nobody in history, has ever gotten their freedom by appealing to the moral sense of the people who were oppressing them.” Yet consistently we find ourselves in conference rooms and workshops, thinking that our freedom will come once we speak “nicely” and “politely” to the oppressor. The young activists of our time have been captured by this flagrant elitist struggle, that promises freedom not to the masses that they purport to represent but to those privileged enough to be a part of this five star struggle. A struggle of talk, tweets, travel and fine china.

Do you ever feel angry when you see this? I know that I do. And as Africa day approaches, I have been compiled to reflect on the state of our resistance and struggle. The resistance must go back to the streets. The struggle must go back to the communities and to the bush. It must again begin to sound like the brilliant and energetic voices of youthful vibrance with a tang of hope. The resistance must again begin to look like youth in sweat and dust, unconcerned, unapologetic and carefree. Focused and only concerned about the conviction to make Africa peaceful and prosperous.

The return to the streets in this context can also be seen to be symbolic. It represents the return to all things authentic. Africa can never be great if the young are confused and too distracted by glittering things. The things we want, we will have if we hold fast to our convictions and stop thinking that freedom will be achieved in a conference room. Our authentic stories of everyday struggles for food, water, electricity, access to education, opportunity, jobs and health will not be changed if all we do is restrict our activism and leadership to conferences. The streets are dangerous it’s true, but the streets are where we need to be until we get answers. The streets are literal and the streets metaphorical. The streets in their metaphorical sense mean doing all the hard things that we know we must do for freedom to come.