While a number of African countries have openly condemned the Floyd’s killing, it is Zimbabwe being singled out for a rebuke by Washington. 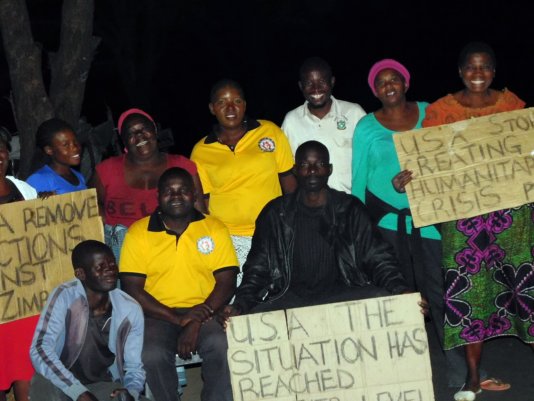 The repressive African country among those global human rights violators accused of using George Floyd’s death to counter criticism of – and even seek to sanitise – their atrocious human rights records.

Following the global outrage resulting from the recent cold-bloodied killing of George Floyd, an African American, by a white police officer in the United States of America, the troubled southern African nation of Zimbabwe earned a dubious honour of sharing the podium with superpowers, China and Russia, being accused as they were, by Washington, of “fomenting unrest” that swept across dozens of American cities and many capitals across the world.

It is not surprising how the small African country drew the important attention of Washington. There is no love lost between the US and Zimbabwe as the former has maintained nearly two decades of sanctions and other restrictive measures against the latter – which it accuses of committing gross human rights violations against its own citizens – so the tragedy in Minneapolis, Minnesota, appeared to have been welcomed by Zimbabwean authorities with a generous measure of gleeful satisfaction.

One after the other, senior Zimbabwean government and ruling party officials took turns to make pot-shots at the US, the country that they accuse of behaving like “the chief justice of the world”.

“When America today decides to willy-nilly kill black people we are not very much surprised,” said Zimbabwe’s deputy Defence and War Veterans Affairs minister, Victor Matemadanda, who doubles up as the political commissar for the ruling ZANU-PF party. “And we know even if they say justice is going to follow on this white policeman who man-slaughtered Floyd there is nothing that is going to come, we know, because they don’t count black life as life that is worth to be living. That is America for you,” he said.

President Emmerson Mnangagwa’s spokesperson, George Charamba, also waded in, through a series of tweets, to say outside intervention was necessary as the Donald Trump administration was dismally failing to protect its own citizens.

“Clearly, the Administration is unable to protect U.S. citizens, in which case responsibility to protect stricture must kick in. The SADC (Southern African Development Community) standby brigade is supremely ready to deploy all maximum means and capabilities needed to put out this raging fire.”

Most of his tweets were slanted towards justifying Zimbabwe’s human rights record that includes police brutality, abductions of political rivals and attacks on journalists, based on Floyd’s killing and the resultant fallout.

It is such barbed remarks from gloating Zimbabwean government and ruling party officials that angered the US, with Trump’s security adviser, Robert O’Brien, naming Zimbabwe – along with China, Russia and Iran – as one of the countries whose statements over Floyd’s death sought to fan the unrest.

“I want to tell our foreign adversaries, whether it’s a Zimbabwe or China, that the difference between us and you is that the officer who killed George Floyd, he will be investigated, prosecuted, and he will receive a fair trial,” O’Brien said.

“The American people that want to go out and protest peacefully, they’re going to be allowed to seek redress from their government, they’re not going to be thrown in jail for peaceful protesting. There’s a difference between us and you.”

In the case of Zimbabwe O’ Brien’s comments were in apparent reference to several instances where the Zimbabwean government has been accused of violently quashing peaceful demonstrations and refusing to bring to book security officials accused of committing atrocities, like in the death of dozens of citizens in August 2018 and January 2019 during anti-government protests.

These remarks by senior American official miffed Zimbabwe, resulting in the US ambassador, Brian Nichols, being summonsed to explain O’Brien’s remarks.

“Zimbabwe is not and has never been an adversary of the US,” said Zimbabwe’s foreign Affairs minister, Sibusiso Moyo, after his tense meeting with the US ambassador. “Mr O’Brien’s allegations are false, without any factual foundation whatsoever and they are deeply damaging a relationship already complicated by years of prescriptive megaphone diplomacy and punitive measures,” Moyo added.

However after leaving the meeting with the host government, the US ambassador appeared determined to add salt to an injury. In a statement, Nichols pointed out that his government at least did the honourable thing in arresting the killer policeman, as opposed to a culture of impunity that has taken root in Zimbabwe.

“Remembering that commitment (to struggle for human rights) today, I again urged Zimbabwe’s government to end State-sponsored violence against peaceful protesters, civil society, labour leaders and members of the opposition in Zimbabwe, and to hold accountable those responsible for human rights abuses.”

Nichols added that both the US’ and Zimbabwe’s constitutions enshrine the right to free speech and peaceful protests.

“We must forever conduct our struggle on the high plane of dignity and discipline. Yet peaceful protesters Joanah Mamombe, Cecilia Chimbiri and Netsai Marova were arrested, abducted and left for dead. To those who deny America’s right to speak on their fate, let me remind you. Injustice anywhere is a threat to justice everywhere, whatever affects one directly affects all indirectly.” The three female victims named by the US envoy include an opposition MDC Member of Parliament and her two activist colleagues who were, in May, abducted “by unknown people” from police holding cells and allegedly sexually abused before they were dumped at a rural business centre a few days later. While State security agents remain the prime suspects, the ruling ZANU PF party insists that victims staged both the abductions and subsequent abuses. The trio, which still in hospital, has been charged for allegedly breaking COVID-19 lockdown regulations and engaging in a demonstration with the intention of disturbing peace.

Nichols said while his President (Trump), the police chief and all relevant officials had vowed to deliver justice on the Floyd case, there was silence on their Zimbabwean counterparts’ side when it comes to commitment to seeking justice for victims of forced disappearances like Patrick Nabanyama, Itai Dzamara and Paul Chizuze. The three are among dozens of Zimbabwean opposition political party members that have over the years disappeared without trace.

While a number of African countries such as South Africa, Kenya, Nigeria, Uganda Ghana and others have openly condemned the Floyd’s killing, it is however Zimbabwe’s poor human rights record, coupled with a gleeful tone of its condemnation – similar to that of Chinese and Russian officials – that resulted in the African country being singled out by for rebuke by Washington. With the African country surviving on funds, food and other hands-outs – majority of them American – it did not come as a surprise that it was the first to back down, with even the protests that had been scheduled for the American embassy in Harare being called off purportedly because of the on-going COVID-19 lockdown.

Under Mnangagwa, Zimbabwe is said to have become worse than it was during the time of the late dictator Robert Mugabe. This year Freedom House ranked Zimbabwe partly free after the country scored only 29 points from a possible 100, down two points from 31 points in 2019.