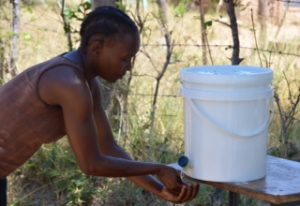 Sunday 6 June 2020 marked day 70 of the national lockdown declared by President Emmerson Mnangagwa and has been in place since 30 March 2020.  The Ministry of Health and Child Care reported an increase in the number of confirmed cases increased to two hundred and eighty-two (282). The number of cumulative tests done stood at fifty-two thousand eight hundred and eighty-five (52 985). Of these, fifty-two thousand seven hundred and three (52 703) were negative. The number of recoveries increased to thirty-four (34) and the death toll remains at four (4).

Excerpts from reports generated by The Herald and Bulawayo24 have also been incorporated into this report.
3.0       Emerging issues              3.1       Lockdown defiance
Generally, religious sects have adhered to the national lockdown although some members of the apostolic sects have continuously defied the national lockdown. On Sunday 7 June, reports of apostolic sects congregating were reported from Magwegwe in Bulawayo, Waterfalls in Harare and Dangamvura in Mutare among other places. In Waterfalls at Caledon Shops, an apostolic sect congregated with more than 75 congregants who were not wearing face masks and observing social distance. It was also reported that some Pentecostal churches in Chitungwiza have also resorted to congregating at members’ houses in small groups to worship.

In Mbare in Harare, it was reported that vendors who sell second-hand clothes have been increasing their presence in the streets around Mupedzanhamo Flea Market. Similarly, vendors of second-hand clothes were also observed in Mutare at Chikanga Market. In all reported incidences, vendors were not observing social distance and most of them were not wearing face masks.

3.3 Reopening of academic institutions
It was reported that some of the country’s institutions of higher learning will open to final year students on 8 June 2020. Final year students at the National University of Science and Technology (NUST), Midlands State University and Great Zimbabwe University started trickling in over the weekend. Students at the aforementioned universities were screened for COVID-19 as they arrived. It was reported that screening exercises will also be done at regular intervals. Meanwhile, Mr Evaristo Madangwa, the Acting ZUPCO Chief Executive Officer highlighted that his company will provide buses to ferry final year students to various universities nationally. This comes after students and universities raised concerns about how students would travel across the country as intercity buses are not operating due to the lockdown.

3.4 Mandatory quarantine
The Zimbabwe Association of Doctors for Human Rights (ZADHR) through a statement highlighted that the increase in COVID-19 infections at state-run quarantine centres is a result of the failure by authorities to meet minimum standards set by the World Health Organisation (WHO). ZADHR highlighted that isolation centres face rampant shortages of sanitisers, soap, ablution facilities with running water, and basic utensils like plates. All these conditions according to ZADHR have culminated in the spread of COVID-19 in quarantine facilities.

The COVID-19 rapid response team in Matabeleland North appealed to law enforcement officers to intensify the search for sixteen (16) returnees who escaped from Mabhikwa High School and Lupane State University (LSU) quarantine centres. The two facilities which are both in Lupane, currently have 54 and 53 returnees respectively. One woman escaped from LSU early May and has not been found while 26 escaped from Mabhikwa almost two weeks ago. Of the 26, one woman and 10 males have been arrested and charged with escaping from custody, and the whereabouts of the other 15 remain unknown. Those who were arrested were found in their respective homesteads in Lusulu and Lubimbi in Binga.

A total of 197 health workers at Mpilo Central Hospital in Bulawayo have been placed in self-isolation after four (4) people tested positive for COVID-19 at the hospital. Two of the people contracted the virus after they had been admitted to the hospital while the third person was an outpatient. It is suspected that the nurse contracted COVID-19 due to interactions with one of the patients who had visited the referral hospital. After the confirmed cases at Mpilo Central Hospital, the Rapid Response Team (RRT) was contacted to contain the potential spread of the virus.

While briefing the Home Affairs Minister Kazembe Kazembe and the Police Commissioner-General Godwin Matanga during a tour of the quarantine centres in Harare, the provincial social welfare officer, Ms Susan Ngani admitted the quarantine centres in Harare have no facilities to meet the needs of children. The three isolation centres in Harare which are Selbourne Routledge Primary School, Prince Edward High School and Harare Polytechnic are deemed to be unsafe for children. As of now, children in isolation centres are mixed with adults some of whom they are not related to.

4.0       Summary of violations
The table below summarises human rights violations documented by the Forum Secretariat and Forum Members from 30 March to 7 June 2020.

6.0  Conclusion
The Forum is concerned with the growing number of citizens defying the lockdown at a time when confirmed COVID-19 cases are on the increase. The Forum, therefore, urges community members to abide by lockdown regulations relating to social distance and the wearing of masks. With the reopening of tertiary institutions, the Forum urges the government and school authorities to take appropriate measures to allow the safeguarding of learners. Finally, the conditions in quarantine centres as reported by ZADHR need to be improved to meet WHO standards to avoid the spread of COVID-19 in isolation centres.