HARARE – Zimbabwe Defence Forces commander General Phillip Valerio Sibanda has accused unnamed Zanu PF leaders of “getting involved in corruption” and betraying one of the core values of the 1970s war of independence. 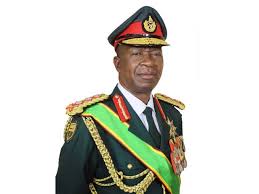 Sibanda, speaking during an interview on the eve of Wednesday’s burial of his former ZIPRA colleague Stanley Nleya at the National Heroes Acre in Harare, said some officials were proving a Rhodesian caricature of leaders as rapacious accumulators to be true.

His comments come just days after health minister Obadiah Moyo was arrested and charged over a US$60 million procurement scandal which has sucked in President Emmerson Mnangagwa’s family.

“When we were out there, we were taught to share whatever was available equally, and this remained the position until sometime after independence when some of us became wayward,” Sibanda said in the video interview posted on Zanu PF’s Facebook page.

He added: “I remember the Rhodesians ran a campaign of trying to demonise guerrilla leaders by drawing leaflets where they put a guerrilla leader there with a big plate full of food and a subordinate sitting there with nothing. That was all intended to destroy that value of sharing that was being cultivated amongst us.

“It’s unfortunate that after independence some of us went wayward and started amassing wealth and getting involved in corruption. But we were taught to share, it’s a value that a lot of us retain today.”

The soft-spoken Sibanda was one of the generals involved in a 2017 military coup which ousted long-time leader Robert Mugabe. Then, the army commanders claimed Mugabe was “surrounded by criminals” involved in corruption.

Mnangagwa, who was installed in power by the military vowing to end corruption, now faces uncomfortable questions after his twin sons Collins and Shaun were linked to a multi-million-dollar procurement “fraud” allegedly perpetrated by their associate, Delish Nguwaya, and an Albania-born Italian man named Ilir Dedja.

Mnangagwa’s nephew and bodyguard, Valdano Brown, has been linked to another company, Jaji Investments, which was awarded tenders to supply Covid-19 kits and devices without following legal requirements.

Public anger is growing against Mnangagwa, whose government is failing to tame hyperinflation and is daily battling shortages of foreign currency to fund imports for food, fuel and medicines.

Zimbabwe is ranked 158 out of 180 countries on Transparency International’s corruption index.

Mnangagwa blames private businesses for accelerating the loss of value in the Zimbabwe dollar, which shed 79 percent on Tuesday when the central bank lifted a discredited 1:25 exchange rate peg to the United States dollar. On the first day of trading using a new auction system, the Zimbabwe dollar was much weaker at 1:57.

Doctors and nurses are on strike, after rejecting a 50 percent pay increase last week. Fuel prices went up by 152 percent on Tuesday, setting the stage for a potential winter of discontent for Mnangagwa’s government which is also facing threats of strikes by teachers.

A military coup as witnessed in 2017 remains unlikely, say political analysts, but Mnangagwa is vulnerable to an impeachment process in parliament. His rivals say he is sponsoring divisions in the opposition to reduce the threat of a section of Zanu PF MPs ganging up with the opposition to oust him in a military-backed plot.