Just in case all of you think we have it tough in Zimbabwe, here is a picture of me with a 16 lb tiger on the Zambezi last weekend. I was at Chiwore Camp with six friends and we had a splendid time around a fire at night, fishing on one of the greatest rivers in the world. 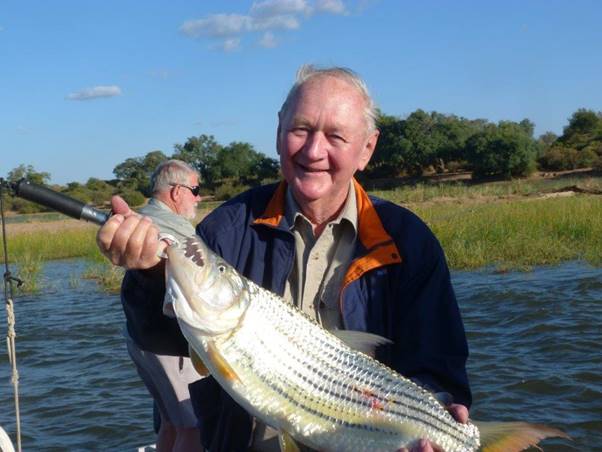 Comfortable bed at night with elephant grazing outside my lodge, superb meals cooked by a Chef and much laughter and sometimes deep conversation on current issues. Behind me on the boat is the former Chairman of the Commercial Farmers Union – Nick Swanepoel. Helping take the picture was his wife Margaret and our mutual friends Terry and Diana Kelly who own the place some 50 kilometres down river from the Manna Pools Wildlife Park.

The fishing was superb even though it was the middle of winter here in Zimbabwe. After heavy rains in the northern catchment of the river it was running strongly. Game was a bit scarce as there is still a fair amount of water in the Pans and springs on the escarpment, but what was there was not nervous or gun shy – clearly the hunting has stopped and I hope this allows the wildlife population recover. The veld was looking great with the Mopani still in leaf and all the winter colours. That is one thing I found so different to the open areas in Europe – here all seasons are rich in colours that you only see in Autumn in the north. The weather was cool with a bit of wind, but for the rest – eat your hearts out all of you who live elsewhere. This is a paradise. On the way home we called in at Lion’s Den and had the best steak rolls in Africa at a place run by a farming family.

Then it was back to Covid, restricted working times and Zoom – but four days away with no cell phone signal or emails! I was tanned and rested and will remember this breakaway for the rest of the year – thanks to the Kelly’s – it is not fair; they are in lockdown there.

The place has many memories for us – it was at Chiwore mouth that another great friend, Mike Edden and two colleagues were sleeping on a sand bank for shelter when an estimated 300 Zanla Guerrillas crossed the river during our Civil War and walked right past them. Mike is now gone to higher service but it is good to remember that what we are today was crafted by those who suffered and fought each other. Today we work together and strive to build a better life for all our people.

I was asked by a colleague the other day, why I stay in Zimbabwe when so many whites have left for other parts of the world seeking a better life and opportunity. It is simple really – this is home. To live like we do elsewhere in the world I would have to be very wealthy. Then there is the fact that when we as a family went to God to ask what we should do during the war, when the future looked so bleak and without hope. We received very clear guidance that we were to stay. Has it been a sacrifice? Judge for yourself, we have two great children and five grandchildren – all doing well and all are well rounded and good human beings. We are all here and each one makes their own contribution to our little country.

To be in the Diaspora is no sinecure – my son has just concluded a sermon series on the Book of Ezra in the Old Testament. This is all about the Jewish diaspora in the Middle East at the time and their experience when they made the return to their homeland and rebuilt the Temple. It took courage and effort – the journey took five months in country riddled with bandits and hostile tribes. Ask any Jew if that effort was worth it, they will reply that the question does not need an answer. They left behind security and property, many had known no other home, yet somehow, Jerusalem called and they responded.

We have a very powerful Diaspora population – of nearly a third of our population. They are spread across the world – 5 million adults plus children. I have walked the slums of South Africa where Shona is the dominant language. I have sat in Board Rooms in New York with young Zimbabweans who have reached the very pinnacles of business and banking. All of them hanker after home. My own prayer is that one day we can issue them a call to come home and like those Jews in Ezra’s day, help us rebuild our country.

Yesterday I was invited to a home in the suburbs to meet two couples who simply wanted to know – is there any hope of better times, what is happening right now. We had a cup of coffee and talked for just over an hour. People say I am the eternal optimist. That is true, because there is no other way to be, anywhere. How did our forefathers survive – my own Great Grandfather, fighting in the Boer War in South Africa, at the end of which the Boers looked like they had survived a German concentration camp. Then my own father – two World Wars, the Spanish Flu, the collapse of the Federation and then 15 years of civil war with no holds barred.

Life is not easy for any of us – it is what we make of what we are given, that makes the difference.

Here we have launched a weekly auction of foreign currency and this has had an immediate impact, exchange rates have stabilised, the rate for the local currency has strengthened by about 20 per cent and we have been able to fund essential imports at lower exchange rates. Now we need to get more foreign exchange onto the market and to implement essential reforms to the gold and fuel marketing systems. If we can get that done, this will be a new country.

The other major step forward this past week has been the news that the farmers affected by the land reform program have at last reached agreement on compensation. This has been many years in the making and is another confirmation that this Government is different to the Mugabe regime. The President promised he would do this and now it is done, in the face of fierce opposition from the hard liners in the Administration.

We have again allowed the free use of foreign currencies in the local economy and this has also resulted in increased economic activity as it has brought currency that was previously locked down in Bank accounts, back into the productive sector. This does not mean we are dollarising – that is behind us and 90 per cent of transactions are still in the local currency. The weakness of that currency has restored our competitiveness in regional markets and exports are now growing and local production improving.

Small steps – but that is what it takes and eventually we will make this country a good place to live and work in again. The fishing – that is the best!!