Eighteen-year-old Tanya Chakaora, a final year student at Dzivarasekwa High in Harare, began this year with a lot of hope and excitement. 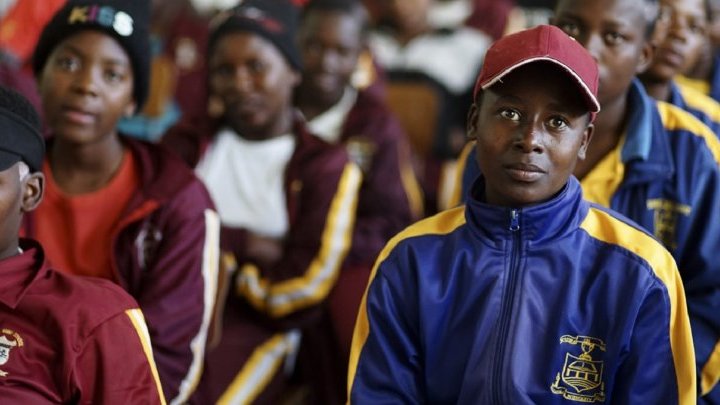 “With the effort, I had put into my studies, I was on course to write my final Advanced Level examinations [in November] and I was confident that I would come up with grades good enough to allow me to pursue my dream career as a geologist,” she tells Equal Times.

But then the coronavirus struck and the world literally shut down. Although Zimbabwe has only had 26 deaths and currently has 1,713 confirmed cases of COVID-19, the country has been under lockdown since 30 March with the various restrictions only relaxed in mid-June.

Schools are now slowly re-opening, but Zimbabwe’s estimated 4.5 million students have lost two and a half months of learning time. The government’s phased re-opening plan should see final year high school students resume classes at the end of July, while the Zimbabwe Schools Examination Council has said that both Ordinary and Advanced Level examinations will go ahead in November, as scheduled.

Tanya is anxious. She says it has been a “serious challenge” trying to finish secondary school during this ill-fated period: “I’ve lost a lot of valuable learning time. Every day I spent at home was another day that I fell behind on my school work,” she laments.

“I had to supplement my learning through private lessons, which are very expensive and are charged in US dollars, which my parents have struggled to raise.”

But missed classes due to the coronavirus lockdown is far from the only issue facing Zimbabwe’s class of 2020. Zimbabwe’s economy has been in freefall for years, but the global recession caused by the coronavirus is likely to see its economy contract by 10 per cent. In June inflation stood at 765.57 per cent – the only country with a worse rate of hyperinflation is Venezuela where the rate was 3,684 per cent in early June. As a result, the price of basic commodities has soared in Zimbabwe, with many items now completely unaffordable to ordinary people.

In addition, every year Zimbabwe churns out thousands of high school and university graduates into an economy where more than 95 per cent of the population is under- or unemployed, and industrial capacity utilisation, estimated at 48.2 per cent in 2019, is expected to fall to 27 per cent this year, according to the Confederation of Zimbabwe Industries. Zimbabwe’s school leavers must also deal with chronic water and electricity shortages, business closures, dwindling foreign currency reserves, increasing food insecurity, closed borders and an ever-shrinking democratic space.

Sifiso Ndlovu, chief executive officer of the Zimbabwe Teachers’ Association (ZIMTA), warns that the re-opening of schools in July poses a number of issues: “The government must brace for double sessions for learners [so that they can catch up with missed classes] but this will require the provision of more teachers,” he says. However, sticking to social distancing guidelines would necessitate a reduction of class sizes and the introduction of strict sanitary measures, especially as so many schools were used as quarantine and testing centres. With an average teacher-to-student ratio of officially 1:40 – although unions argue that the real ratio is closer to 1:70 or even 1:100 – it is impossible to guarantee the safety of teachers and students.

Social distancing is also impossible on public transport, there are inadequate supplies of face masks and hand sanitisers, and some rural schools are without access to clean water. All of this, Godfrey Sengurai, an English teacher at Best End Christian College in Harare says, will make it very difficult for students and teachers to safely return to the classroom: “A single subject which required eight teachers across all year groups now requires about 24 teachers and it becomes difficult because it is highly unlikely government will recruit more, which will increase the burden on the existing teachers.”

Earlier this year, the passage of an amended Education Act guaranteed the provision of state-funded basic education, but the cost of tuition fees at government-run schools – which ranges from US$30 to US$700 a year – is still too expensive for many families. In recent decades, the education system has suffered from crippling underfunding: according to the UNICEF Primary and Secondary Education 2018 Budget Brief, overall public investment in education stood at 15.8 per cent of the 2018 national budget, which is six percentage points lower than the 22 per cent regional benchmark set by the Southern African Development Community (SADC).

Nearly all the money goes on wages – expenditure such as learning materials and education infrastructure accounts for a paltry 6.3 per cent of the education budget. The result is large class sizes, particularly in rural areas, a deficit of 3,000 primary and secondary schools across the country, and approximately 15,000 teacher vacancies.

The coronavirus has also exposed the massive divide in Zimbabwe’s education system, broadly between the privately-educated haves and the public school attending have-nots.

While many well-funded private schools have rolled out e-learning during the pandemic, Tanya – like the vast majority of Zimbabwe’s students – has no access to broadband infrastructure, or equipment such as laptops or tablets. And on average, 1GB of internet data in Zimbabwe costs approximately 10 per cent of average income; by comparison, in India, it’s 0.45 per cent and 0.71 per cent in China. In rural areas, the situation is even worse, but all over the country, millions of young Zimbabweans are locked-out of e-learning opportunities.

“No matter how hard I work, I face so many difficulties: the lack of academic facilities, the lack of books and other resources – and some of us do not even have the privilege of participating in online studies. I feel this has really hindered my progress,” Tanya says.

In order to ensure that she does not fall completely behind, Tanya has come together with other like-minded students to form a study group where they learn together and share books. “But this is not enough. We are just students and we need a facilitator to help us complete our syllabus,” she says.

Stigma facing the class of 2020

Over the years, Zimbabwe’s students have experienced significant disruption to their schooling as teachers have gone on strike to demand better pay, better working conditions and for their salaries to be paid in US dollars as Zimbabwe dollars have plummeted in value. An average teacher in Zimbabwe earns the equivalent of US$40 per month, which is far below the poverty line, now estimated at US$600, according to the Zimbabwe Congress of Trade Unions. Meanwhile, a single loaf of bread costs US$1 while a bag of maize costs between US$5 and US$7. In February this year, teachers went on a nationwide strike demanding better pay. The strike was suspended on 11 February only for schools to close at the end of March following President Emmerson Mnangagwa’s lockdown announcement.

As a result, Tanya says she is worried that there might be some stigma attached to those students who graduate from high school or university this year: “I think it might be difficult for colleges, varsities and employers to have confidence in the class of 2020 because we may be looked upon as though we received leniency from examiners because of the challenges we faced.”

Sengurai echoes Tanya’s concerns. “We have only gone through about one-third of the syllabus and it will be very difficult to complete the remaining syllabus in the few months before the students sit for their examinations,” he says. He is concerned that this year’s high school graduates might be viewed as “half-baked” by would-be employers or university admissions.

However, David Coltart, a former education minister in Zimbabwe’s inclusive government between 2009 and 2013, thinks that the government was right to continue with the final year examinations as planned because the students are graded for work done over the course of their secondary education not just the last year. “As long as the examination standards are not lowered, universities and colleges can still have confidence in the abilities of individual students – but of course, the pass rate will drop dramatically,” he says.

ZIMTA boss Ndlovu thinks the disruption caused by the pandemic provides a good opportunity to reimagine the way in which students are assessed. Rather than deciding the course of a young person’s life based on their performance in a two-hour exam, “instead, education should provide for skills and aptitude channels that make everyone a potential success story in life. This should be the approach in Zimbabwe’s updated curriculum,” he says.

Educator and president of the Progressive Teachers Union of Zimbabwe (PTUZ), Takavafira Zhou, agrees that now is the time to reform Zimbabwe’s education system, which was once considered one of the best in Africa. “Zimbabwe has over the past years deviated from [an education system] which emphasises the blending of theory and practical life-saving skills, particularly industrial and agricultural skills to guarantee food security, industrial development and improvement of people’s livelihoods – postulated briefly from 1980 to 1985 – to a narrow and constricted education system tailored to produce supporters of the current political system,” he says.

The government, Zhou believes, should invest in better educational infrastructure, and specialist schools and colleges to create a conducive environment for both theoretical and practical learning. “We need well-equipped science laboratories, specific agricultural, geography, history and arts rooms as well as the construction of more technical and vocational training schools. Not to mention schools for orphans and vulnerable children, as well as schools that focus on ICT,” he says.

But for Zhou, the greatest challenge facing Zimbabwe’s education system is the fact that it has become contested terrain between politicians and educators, with the former wanting to use education to entrench their hegemonic power and introduce reforms to buttress this trajectory.

“We have experienced command curriculum changes for political expediency, with very minimal professional engagement and budgetary support,” he says.

Evidence of this can be seen in Zimbabwe’s new curriculum which in 2017 introduced a compulsory national pledge and new subjects such as Heritage Studies, which covers the Zimbabwean constitution, patriotism, and national identity.

Students must also take part in mass displays, which the government describe as “spectacular artistic performances, which display the aesthetic values of sound, artefacts, movement and posture” in a bid to “promote a sense of beauty, harmony, discipline, leadership, collaboration, teamwork, social integration and tolerance”; however, critics have condemned the militaristic nature of the drills and have compared the exercises to something out of North Korea.

Now is the time, Zhou notes, for a broad-based curriculum tailor-made to ensure that education plays a pivotal role in the development of individuals and communities, and bolstered by the required investment in quality public education to ensure that all Zimbabwe youth have access to opportunities and a better future. “Education must be guided by professional advice as opposed to political expediency,” he warns.