Donors raise concern over the alleged pilfering of millions of dollars in public funds. 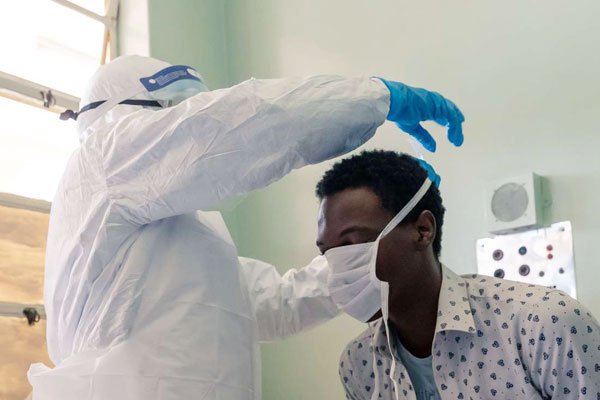 A medical staff member places a face mask on a mock patient at the Wilkins Infectious Diseases Hospital in Harare on March 11, 2020, as staff demonstrate their preparedness to treat Covid-19 coronavirus patients. Zimbabwe is withholding travel documents for thousands of returning nationals, following reports that some have escaped from isolation centres. PHOTO | JEKESAI NJIKIZANA | AFP

A corruption scandal involving top government officials is threatening to derail Zimbabwe’s response to the coronavirus pandemic, with donors raising concern over the alleged pilfering of millions of dollars in public funds.

The local representative of the company, who is a close associate of one of President Mnangagwa’s sons, has been charged after it emerged that Interpol was investigating the firm for money laundering after it received a $2 million payment from the Zimbabwe government.

Health Minister Obadiah Moyo was also charged with criminal abuse of office for facilitating the deal, but has retained his position.

The US, which has given Zimbabwe substantial amounts of money to fight the pandemic, said it had noted “serious allegations of government corruption regarding Zimbabwe’s Covid-19 response”.

“In a pandemic, corruption has a human cost,” the US embassy in Harare said. “Every dollar lost to the corrupt is a dollar stolen from the Zimbabwean people.”

The ruling Zanu PF threatened to take unspecified action against journalist Hopewell Chin’ono after he published posts on social media alleging links between the president’s son Collins Mnangagwa and Drax.

Patrick Chinamasa, the Zanu PF spokesperson, said the first family was a victim of a smear campaign.

“We have noted the systematic targeted attacks on the first family members by unscrupulous characters like Hopewell Chin’ono targeting the president’s son,” Mr Chinamasa said.

“The false reports that claim the president’s son has interest in Drax International have not been backed by any evidence. We are warning the public and those writing these lies to stop. We wish to advise false reporters and our detractors to desist from perpetrating desperate character assassination.”

The US embassy said it was concerned by the threats against journalists who had uncovered the scandal. “We are deeply troubled by those who intimidate journalists for reporting alleged corrupt procurement practices amid Zimbabwe’s Covid-19 response. A free press is key to transparency and helps ensure government delivers services efficiently.”

The European Union also weighed in, saying corruption had the potential to derail Zimbabwe’s Covid-19 response. “Zimbabwe loses almost $2 billion a year to corruption, and the latest allegations of non-procedural behaviour by government officials in the acquisition of medical equipment are worrisome,” the EU mission in Zimbabwe said. “The cost of corruption is high, even more so amid a crisis like the Covid-19 pandemic. Corruption undermines development, reinforces inequalities and destroys confidence in those in power.”

The Zimbabwe Anti-Corruption Commission says it is investigating the scandal and has interviewed senior government officials over the controversial Drax deal.

Collins Mnangagwa issued a statement denying any links with the Drax representative in Zimbabwe, Delish Nguwaya, who remains in custody after he was repeatedly denied bail by the courts.

However, the denial by the president’s son was challenged days later after pictures of the first family socialising with Mr Nguwaya emerged.

Alec Magaisa, a Zimbabwean law professor based in the UK, said the case against Mr Nguwaya was set to fail because the government appeared reluctant to investigate more prominent people behind the scandal. “This weak case is a fraudulent attempt to fool the public into thinking that something is being done. Nguwaya will walk free and the public officers who should be held account will carry on as if nothing happened,” he said.

Zimbabwe has largely relied on donors to fund its response to Covid -19. The country has recorded seven deaths and 600 cases. But donors are reluctant to directly fund the government because of rampant corruption.