Relatives who lost loved ones in a 2018 army clampdown on opposition protesters still wait for compensation and answers.
Harare, Zimbabwe – Allison Charles is still haunted by the image of her brother’s lifeless body lying in a pool of blood.

“They just shot him like he was a dog and left his body on the street,” she said.

Gavin Dean Charles, 48, was one of the six people killed in Zimbabwe’s capital two years ago when soldiers opened fire on opposition supporters protesting against what they said was an attempt by the governing ZANU-PF party to steal tightly contested elections.

Many other demonstrators were wounded in the army clampdown in Harare’s central business district on August 1, 2018, with some of the casualties shot from the back.

“I am still struggling to sleep at night and to come to terms with everything that has happened,” said Charles. “I am taking anti-depressants now.”

She is not the only one struggling to cope in the aftermath of the bloodshed.

“The death of my son still hurts, even now,” said Maxwell Tauro, whose son, Challenge, was also killed on that day. “He was a good boy who was working in town and who was not politically active.” 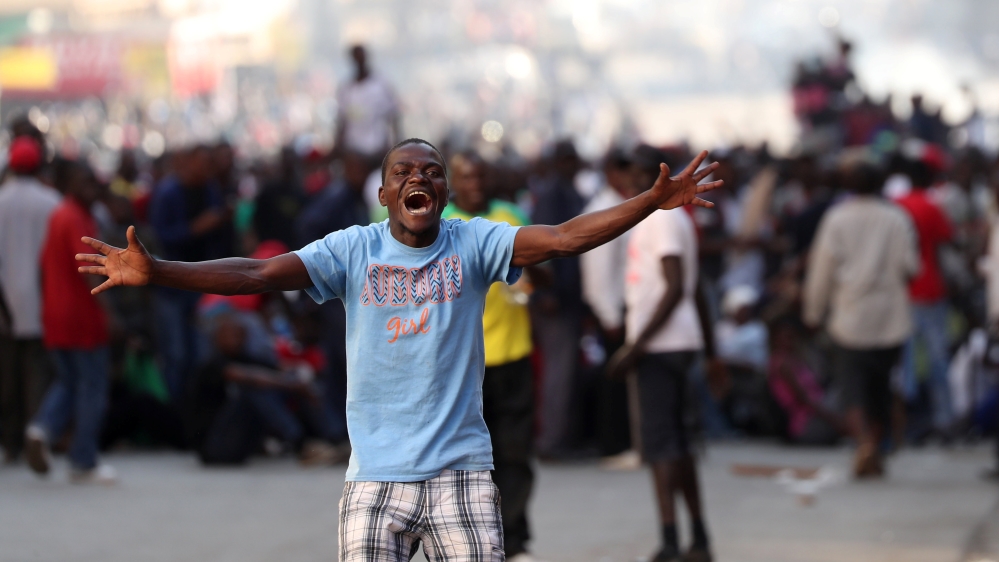 President Emmerson Mnangagwa, who was declared the winner of the disputed July 30 vote, announced in late August that year a Commission of Inquiry to look into the post-election violence.

The commission announced its findings in December 2018, recommending among other things the government pay compensation to the families of those killed and to those wounded, saying perpetrators needed to be held accountable.

At the time, Mnangagwa had said he would “study the recommendations and decide the way forward” – but to date, none of the commission’s recommendations has been implemented.

“I have not heard from the government on compensation,” Tauro said. “They bought a coffin and food for the funeral and that was it. When we buried Challenge, we never saw them again,” he added.

The commission, which was chaired by former South African interim President Kgalema Motlanthe, also recommended financial support including school fees for the young children of the deceased – but Charles said the government has yet to provide for her late brother’s daughter, a high school student.

“My niece needs school fees and other things to survive,” said Charles.

Meanwhile, Loveday Munesi, a survivor of the August 1 incident who still has a bullet lodged in his buttocks, is still waiting for a court to rule in his case after he sued the government for the wounds he sustained in the shooting, according to his legal representatives.

“Loveday is one of the persons who were mentioned in the Motlanthe report and gave evidence before the Commission of Inquiry which recommended that government should set up a fund to ensure that victims of the 1 August incident are compensated,” said Kumbirai Mafunda, a communications officer with Zimbabwe Lawyers for Human Rights.

The election was the first since a military coup in November 2017 overthrew President Robert Mugabe, who had ruled Zimbabwe for 37 years.

Mnangagwa came to power after Mugabe’s removal, promising a new start and a revival of the country’s shattered economy by attracting foreign investment.

But almost three years later, Zimbabwe is in the throes of a severe economic crisis characterised by hyperinflation, a local currency that is rapidly depreciating against the US dollar, foreign exchange shortages and unemployment at an estimated 90 percent.

Mnangagwa, a ZANU-PF stalwart, has also been accused of employing the heavy-handed tactics of his predecessor against political opponents.

In mid-January last year, at least 17 people were killed when security forces fired live ammunition at demonstrators protesting against a sudden announcement of a 150 percent petrol-price rise.

Rights groups have also accused the ZANU-PF government of cracking down on dissent, citing the beatings and the use of “excessive force” against opposition demonstrators and the arrests of a number of journalists, activists and critics. The government blames the opposition for stirring discontent.

Last week, journalist Hopewell Chin’ono was arrested and charged with inciting the public to commit violence. Prior to his arrest, the documentary filmmaker had expressed his support for protests against government corruption called by opposition politician Jacob Ngarivhume for July 31. Ngarivhume was also arrested, and both men deny the charges against them.

Amid the rising political tensions and deepening economic woes, a top ZANU-PF official on Monday called the US ambassador to Zimbabwe a “thug” and accused him of funding the opposition ahead of the planned street demonstrations, without providing evidence.

Rashwheat Mukundu, a political analyst, said Mnangagwa’s time in office has been “disastrous”.

“It has been two years of disappointment, really, for the people of Zimbabwe,” he said. “When he took over, he had the support of the international community who were stampeding to work with him rebuild Zimbabwe’s economy which had collapsed under Mugabe.”

“Now, he doesn’t have any goodwill.”

Economist Victor Bhoroma said Zimbabwe’s economic troubles have reached a “tipping point” and called for bold reforms to stem a crisis that has seen Zimbabweans haplessly watch their earnings evaporate.

Al Jazeera reached out to both Information Minister Monica Mutsvanga and Mnangagwa’s spokesman Nick Mangwana, but repeated attempts to get a comment for this story went either unanswered or were unsuccessful.

Meanwhile, with the two-year anniversary of the killing of their loved ones fast approaching, the profound grief of the relatives left behind is also accompanied by a sense of injustice.

For Charles, the absence of accountability means she has yet to begin the recovery process.

“I want closure and justice for my brother,” she said.