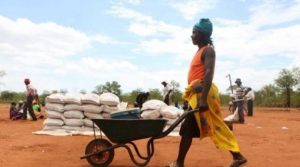 • Although food security outcomes are better than previously anticipated in areas of the country, high humanitarian food assistance needs persist and are expected through at least early 2021. Despite the harvest, Crisis (IPC Phase 3) outcomes are expected across the southern, western, and extreme northern parts of the country throughout the outlook period due to below normal access to both food and income. Humanitarian assistance is currently improving outcomes to Stressed! (IPC Phase 2!) in some areas of the country.

• Outcomes in some typical surplus-producing areas in the north are better than previously anticipated, with Minimal (IPC Phase 1) present and expected from June to September. As livelihoods in these areas are mainly crop dependent, the somewhat favorable crop production and access to income, while below normal, is sufficient for poor households to meet their minimum food and some non-food needs. From October through January, Stressed (IPC Phase 2) outcomes are expected in surplus-producing areas as food stocks dwindle or are depleted and households are reliant on markets for food. Urban areas are currently in Crisis (IPC Phase 3) although Stressed (IPC Phase 2) outcomes are expected as the informal sector restarts following the lifting of COVID-19 restrictions and the economy slowly dollarizes.

• Economic volatility and depreciating parallel market exchange rates are progressively constraining livelihoods and disposable incomes. The official annual inflation rate in May stood at 786 percent and the local currency depreciated by over 80 percent between May and mid-June. In late June the government shifted from a fixed official foreign exchange system to a new auction system. However, volatile macroeconomic conditions are anticipated throughout the outlook period.

• COVID-19 related measures continue to constrain access to food and income for market dependent households even as government has progressively relaxed some restrictions. In mid-June, the informal sector re-opened on the condition operations register with local authorities and COVID-19 control measures are observed. National borders remain closed except for essential goods and services; inter-city and rural-urban transport services remain banned. The number of confirmed COVID-19 cases continue to increase driven mainly by returning citizens from South Africa and Botswana.

• The 2019/20 official maize production estimates are about 30 percent below average. In response to inflationary pressures, in April the government increased maize and small grains producer prices by about 80 percent, followed by a 30 percent incentive for deliveries through the end of July. Maize grain and maize meal imports mainly from South Africa continue although local supplies remain low. Shortages of some basic food items mainly maize grain, maize meal, sugar and cooking oil continue across most markets. Maize grain and maize meal prices are projected to remain significantly above average throughout the outlook period.