(CNN)Zimbabwe's government signed an agreement Wednesday worth $3.5 billion to compensate white farmers who were evicted from their land during a controversial and often violent land redistribution program in the early 2000s under former President Robert Mugabe. 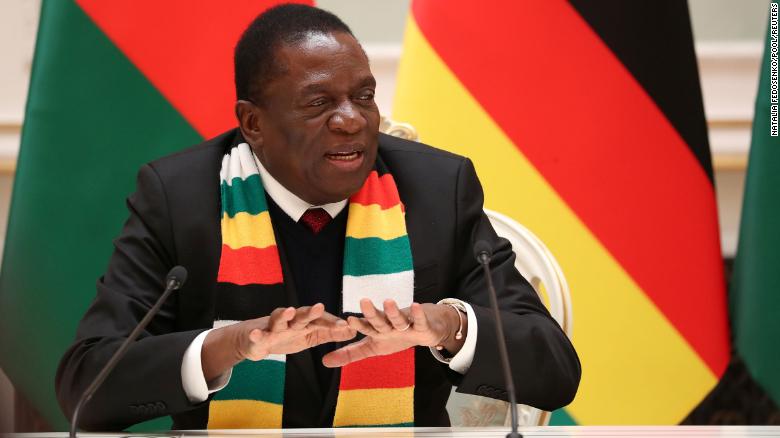 Zimbabwe’s President Emmerson Mnangagwa
“This momentous occasion is historic in many respects, brings both closure and a new beginning in the history of the land discourse in our country Zimbabwe,” said current President Emmerson Mnangagwa, after signing the agreement at State House with Andrew Pascoe, the president of the Commercial Farmers Union of Zimbabwe.
“After almost 20 years of conflict over the land issue, representatives of farmers who lost their land through the fast track reform program and representatives of government have been able to come together to see a resolution of this conflict. To me this is nothing short of a miracle. For me it has been a dream that I will see this day,” said Pascoe.
According to the agreement, 50 percent of the $3.5 billion would be paid with 12 months from the day of signing, while the balance is paid within five years.

Economists agree that the Zimbabwean government, cash strapped after years of hyper-inflation and allegations of mismanagement, cannot afford to make the compensation.
In a statement, the Finance Ministry said that they will be issuing long term bonds and that the parties will approach international donors to try and raise the funds.
The agreement does not compensate farmers for the value of the land, but rather the infrastructure that was lost by the owners.
“The government of Zimbabwe does not have any obligation for compensation for acquired land. Our entering into the agreement does not create any liability whatsoever in this regard,” said Mnangagwa.
John Robertson, an independent economist, says Zimbabwe’s land issue is far from over as the cash-strapped government still has to source the money for compensation.
“Are our priorities skewed? In the midst of a pandemic with no doctors or nurses in hospitals. Now we jump to farmers? Yes there is an obligation to pay. Where is the money? We may sign many agreements, but this one for now looks like just an admission of intention to pay,” said Robertson, a well-known critic of Zimbabwe’s government.
Health workers in Zimbabwe’s hospitals are at loggerheads with the government over salaries. The nurses union protested last month asking the government to increases their wages.
Wednesday’s agreement with the farmers marks another symbolic departure for Mnangagwa from his predecessor Mugabe, who he helped oust in 2017.
Mnangagwa has made several steps toward reconciling with white commercial farmers since taking office — in part to help revive the ailing economy.
Post published in: Featured