In August last year at COP18 in Geneva, Cites members voted to discontinue the removal of African elephants from their natural or historic ranges except under extraordinary circumstances. 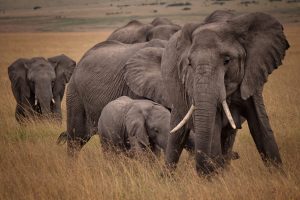 Additionally, conditions in any ex-situ destination for live African Elephants, should be fully equivalent to their social and ecological environment in their wild native ecosystems and those involving  the least disruption to social groupings and their natural, normal behaviour.

It had been first time that the convention has recognised the importance of welfare in conservation.

However Last week, Niger and Burkino Faso, presented Cites with a new report  that includes an account of  Zimbabwe’s gross violation of the Cites  COP18 resolution, with its sale of 32 largely unweaned elephants to China.

Despite the vote, Zimbabwe ignored the resolution and the elephants were flown to China on October 19 last year in contravention of a court order and Zimbabwe’s own constitution.

The new Cites report contains the harrowing details of their capture, export and what has subsequently become their fate.

The elephants were captured from the wild in 2018 and were held in pens near Hwange’s main camp before being shipped to China on October 19, 2019.  Five of the elephants were not loaded on the Saudi transport plane due to health reasons and are believed to have died. The animals then were flown to China via Saudi Arabia to Shanghai.  By May this year they were situated in the Longemont Animal Park near Hangzhou.

At a videoed press conference and questioned by journalist Adam Cruise, Higuero said she did not believe that any of the elephants being exported were babies, as some had tusks. In fact, elephants start growing their permanent tusks at a year old.   She said that previous secretariats and the Zimbabwean management and scientific authorities, as well as the previous CITES Secretariat, had visited the zoos in China and declared the destinations as “appropriate and acceptable”. She however said she would consider evidence to the contrary.

She endorsed the export despite her view being overruled two months later at COP18. She had not only dropped the established protocol of her office but her ignorance of basic elephant biology had sealed the fate of the 27 elephants that eventually were condemned to a life of misery in China.

According to last week’s Cites report, undercover footage received shows the elephants separated from each other in barren indoor cells. And recent photographic evidence shows the elephants have been undergoing inhumane training by mahouts, to prepare them for entertainment use.  The report also discloses that there have been unconfirmed reports that some of the elephants are being sent to Yongyuan Biotech company in Shaanxi. The company produces health supplements, some of which are derived from animals.

Despite Zimbabwe’s constitutional constraints, between 2012 and 2019 Zimbabwe has exported 140 juvenile elephants for China. To date 22 of these young elephant calves have died. More have died during capture and in Zimbabwe Parks holding facilities.

The big question is who benefitted from the sale of the young elephants? Animal activist Sharon Hoole who campaigned tirelessly to prevent the export of the 2019 consignment, says that she received information that Zimbabwe Parks were paid US$13 000 each for the elephants but she has verbal evidence that that the cost to the Chinese was at least $100 000 each. So, the question is who brokered the deal and who was paid the balance?

Michele Pickover director of EMS foundation says she believes that Cites is the lowest common denominator when it comes to its legislation. “Most African countries  have their own standards and national legislation for the management of their elephant populations”, she said.

“Cites are dragging their heels. They have not even discussed what the definition of a zoo is. They are not fit for purpose. We have already lost 70% of animal species. All their technical solutions and resolutions are not enforceable. It is  like hitting a brick wall”.

The Zimbabwe elephant foundation points out  in a September 2019 article, that the value of a single elephant in the wild is worth about $1,5m in tourist revenue, far more than the proceeds from a sale which ranges from $40 – 60 000, excluding the costs of capture.

Information that was submitted by Niger and Burkina Faso report to the Cites Animal Committee described the holding pens at the incongruously called ‘Taihu Lake Longemont Paradise Park’, as steel cages, 6 metres high, four and a half metres long and three metres wide.  These cages  each have a shallow rectangular water pond, a metre above the floor.

Paradise is reportedly planned to become the biggest of its kind globally when it opens. It will hold more than 11 000 animals across more than 400 species.

The latest Cites report says, that if it is agreed that the 2019 export of the  Hwange elephants, do not meet the conditions clearly laid down in the guidelines agreed at COP18, the next step will be return them to Zimbabwe where they can be rehabilitated before being returned to the wild.

But Audrey Delsink of Humane Society International – Africa, says returning  the elephants to the wild will be a long process that will have to be done by experts in the field before returning them to their own environment and integrating them with a herd.

“But the level of trauma they have experienced has been huge. First they were captured, torn from their herd and kept in Bomas in Hwange for a year where they formed bonds with the other elephants, then they were flown to China and separated from each other. It is excessively cruel and one does not know whether rehabilitation is possible”, she said.