Still today, six years after leaving Hwange, I receive frequent messages from people around the World asking about elephants, and expressing gratitude to me for writing Elephant Dawn. I am forever grateful to have had the opportunity to do so. It's certainly true that you can often do even more for elephants when you're outside of a corrupt country. 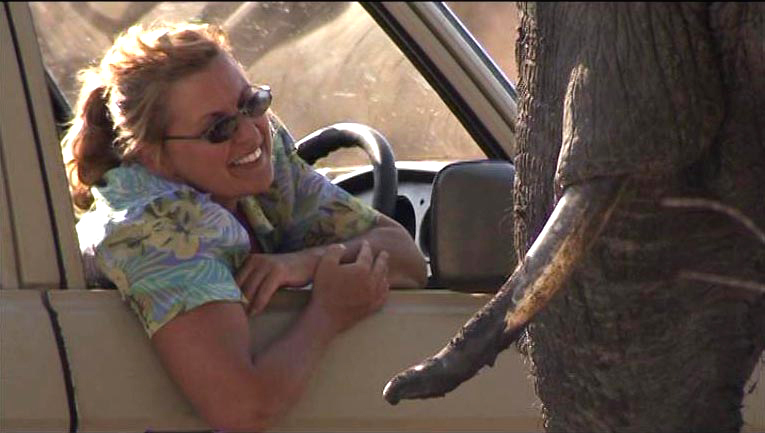 Sharon Pincott during the filming of All the President’s Elephants

This past July I posted on my Facebook pages a press article about a sport-hunter in Gwayi, Zimbabwe, named Langton Masunda (on land that borders Hwange National Park), who arranged a “botched jumbo deal” in June 2018. This article told us that a businessman in neighbouring South Africa in effect paid Langton Masunda US$58,000.00 for “4 sub-adult elephants” from his farm, which were to be snatched from their mothers and handed over to this South African man. But, in this particular case, the elephants were never handed over in the end, hence a legal case now, over the return of monies between these two parties.

For a sport-hunter to be privately arranging sale of Hwange elephants (at under market-value) from a small, unfenced sport-hunting concession, where Hwange elephants merely wander across (and do not reside), is nothing short of corruption. This corrupt sale only went wrong when the timing of the proposed sale matched the timing of the World in uproar, and the petitioning of Zim President Mnangagwa, after my public confirmation of scores of young elephants in National Park bomas awaiting transport to Chinese zoos; a situation that everyone was denying. Langton Masunda also got caught out. But who was going to help him to capture these young elephants? It’s not something that he could have done alone. And that puts even more of a suspicious light on dubious activities within the ZimParks Umtshibi capture team.

I can confirm that both the office of President Mnangagwa, and the Director General of National Parks, read my more detailed Facebook post about this proposed sale. But has anything happened to Langton Masunda and his cohorts as a result?…. Somehow, I doubt it.
And then there’s the Hwange Nepotism…

When the dubiously wealthy Zanu-PF politician, Obert Mpofu, first claimed Kanondo – a key Presidential Elephant land area, next to the iconic Hwange Safari Lodge – back in the early 2000s, it was his brother-in-law and his son who did most of his dirty work on the ground. There were years and years of threats, intimidation and unwanted physical contact. In fact I once found myself in court, after I filed (and surprisingly won) an assault charge against them. It was a stressful, drawn-out process, but miraculously Mpofu and his relatives were finally thrown off the Kanondo land in 2005.

Eight long years later, in 2013, this exact same stretch of land was (outrageously) claimed again – despite earlier government assurances that it must remain as protected land always. This time, it was claimed by a woman, Isabel Shanangurai Madangure, who purported to be an Opposition Party Leader. Everyone in the know knew that an Opposition Leader in Zimbabwe would NEVER be allowed to grab such prestigious land!… In reality, Isabel Madangure never ran against Mugabe in any election. She is in fact known to have been a Spy for Zanu-PF, reporting back to Zanu on inside Opposition operations. In 2008 – the election year that could have dramatically changed Zimbabwe’s history for the better – the press reported her openly urging her followers to vote for Robert Mugabe, rather than for the main Opposition Party… Isabel Madangure was, in fact, related to Zimbabwe’s previous (corrupt and disgraced) Health Minister, Obadiah Moyo – another of the ZanuPF frauds and thieves, recently in the press over a Covid-19 drug procurement scandal, and apparently not even a registered doctor despite purporting to be one. The Kanondo land grabber, Isabel Madangure, was his sister. She died in 2011 however, having never actually appeared in Hwange to lay claim to any land.

But of course this saga didn’t end there:  Isabel Madangure’s (America-based) daughter, Elisabeth Pasalk then decided, in 2013, that she had ‘inherited’ this Kanondo elephant land, next to Hwange Safari Lodge, from her dead mother – and proceeded to claim it as her own personal property. Pasalk now calls this grabbed land Gwango Wildlife Parks/Gwango Elephant Lodge/Gwango Heritage Resort. It is land that should never, ever, have been subject to individual land claims, as I made very clear prior to my leaving Hwange for good in 2014; totally burnt out and not willing to be complicit in something that was becoming so dirty and corrupt.

It was clear early on that this Kanondo land grabber had connections. With her mother being a sister of the disgraced Obadiah Moyo, Elisabeth Pasalk was therefore the niece of this ex-Minister of Health. And we already knew that Pasalk’s brother, Rodgers Madangure – a sport-hunter from Mabelengwe Safaris in Metetsi  – also had his own dubious record, with documents proving that he had already been in court for hunting illegally.

So, keeping all of this in mind, why on earth was Elisabeth Pasalk allowed to grab this protected elephant land as her own, and be permitted to stay there, even after so many red flags were raised? – and especially when someone as powerful as Obert Mpofu was in 2005, had previously been kicked off? And how did her corrupt uncle, Obadiah Moyo, ever make it into President Mnangagwa’s Cabinet ministry in the first place?

There’s no need to wonder for too long, since Nepotism is indeed still very much alive and well in Zimbabwe. High-level Zimbabweans say that Mnangagwa’s mother comes from this same Moyo clan…

Mothers, daughters, nieces, nephews, brothers, uncles, cousins. All of these people have profited from a dirty, corrupt, system. All continue to benefit unethically from proximity to power.

It’s important to understand – and to always remember – that these people go to extraordinary lengths, and all sorts of illusions, to cover up who they really are, how they actually got there, and how they manage to survive.

Only those with their eyes wide open manage to see through the elaborate setups, which are put in place in an attempt to distract us from the dirty truths… Just what is going on behind the scenes? What are these elaborate setups actually a cover for?

People with real ethics must keep their eyes wide open. The World must continue to watch more attentively. For the sake of the elephants. It’s so important to continue to stand up to scenarios like this, rather than being bullied into being afraid of them.

In addition to all of this worrying nepotism, there is also recent disturbing proof that some Hwange photographic tourism operators are supporting unethical sport-hunters – and one has to wonder if this also extends to those trying to underhandedly snatch more young elephants from their mothers in the wild – by sharing with them their Drone footage of Hwange elephants. This is another example of just how unethical some operators can be.