HARARE (Reuters) - A prize-winning Zimbabwean novelist and filmmaker arrested at recent protests accused President Emmerson Mnangagwa's government on Tuesday of holding its people in a repressive "chokehold" as they endured an economic emergency. 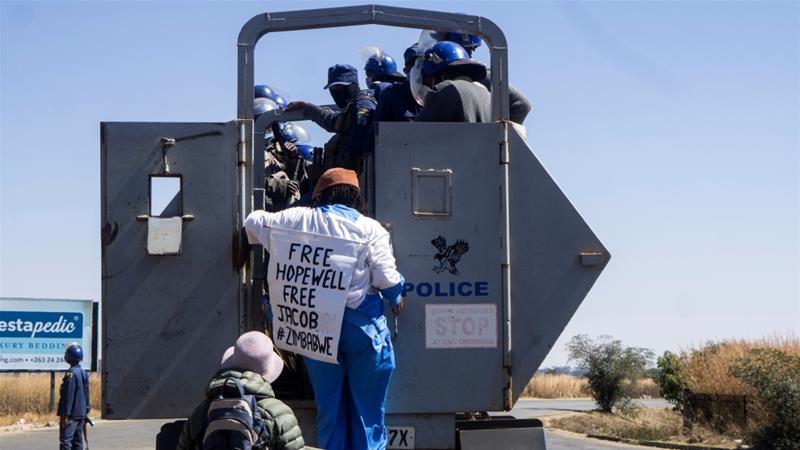 Tsitsi Dangarembga, whose latest book “This Mournable Body” has been nominated for a Booker Prize, was bundled into a police truck while holding placards on Friday and charged with breaking the COVID-19 lockdown to hold an illegal gathering.

Bailed pending trial after a night in jail, the 61-year-old said she could not keep quiet while neglect and mismanagement left Zimbabweans unable to afford a decent meal and healthcare.

“These are things that are outside the reach of most Zimbabweans. It’s like the people of Zimbabwe are in a chokehold,” she told Reuters from her home in Harare’s affluent Borrowdale suburb.

“It’s a matter of survival really.”

Security forces deployed on Friday to block planned opposition protests over corruption and economic hardships. Foes say Mnangagwa is behaving like his autocratic predecessor Robert Mugabe and exploiting the coronavirus crisis as cover.

‘WHO IS PAYING YOU?’

Popular anger is high over inflation above 700%, hospital strikes, and shortages of medicines and foreign currency.

Mnangagwa blames the opposition, Western sanctions, droughts and the pandemic. “Dark forces both inside and outside have tampered with our growth and prosperity,” he said in a speech on Tuesday.

Dangarembga said she had been lucky after rights groups said some activists rounded up over Friday’s unrest were abducted and tortured. The government denies that.

“When we got into the (police) truck one of the first thing that happened is I was asked ‘who is paying you?’ I was very outraged by that question,” she recalled.

“What was going through my mind was:’what do we do now? The main thing is not to escalate the situation, we have not done anything wrong so we shouldn’t be frightened’.”

“Trying to change Zimbabwe for the better is going to be a long engagement and we have to strategise,” she said.

Dangarembga’s first novel “Nervous Conditions” was part of Zimbabwe’s school curriculum and won the African section of the Commonwealth Writers Prize in 1989.