Zimbabwean authorities have thwarted a peaceful anti-corruption protest which was planned for today and launched a witch-hunt against political and human rights activists suspected of being behind the planned demonstration, Amnesty International said today. 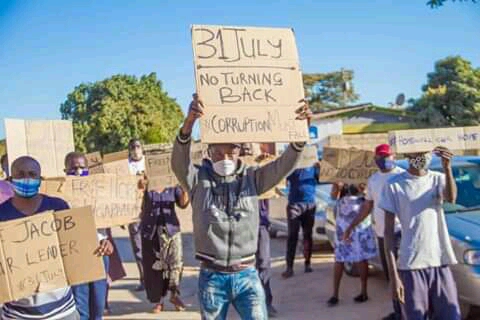 A number of activists have gone into hiding after police published a list of names of human rights defenders who are wanted for questioning in connection with the planned protests. A number of opposition leaders are also understood to be wanted by the police, while six others have already been arrested.

“The brutal assault on political activists and human rights defenders who have had the courage to call out alleged corruption and demand accountability from their government is intensifying. The persecution of these activists is a blatant abuse of the criminal justice system and mockery of justice,” said Muleya Mwananyanda, Amnesty International’s Deputy Director for Southern Africa.

“This latest witch-hunt and repression of peaceful dissent is a continuation of what we have seen in the country in recent years, including the abductions and arbitrary arrests of those who are critical of the government, in an attempt to muzzle differing views. The thwarting of the protest illustrates the Zimbabwean authorities’ total intolerance of criticism.”

Six activists have been arrested or abducted in the past few days, to prevent the protests from taking place today. Opposition MDC-Alliance spokesperson Fadzayi Mahere and Henry Chivanga,  an activist fighting for rights of people with disabilities are among those who were arrested today. Police also arrested the sister of investigative journalist Mduduzi Mathuthu on 30 July, and refused to release her until the journalist appeared at Bulawayo Central police station. Mduduzi Mathuthu is the editor of online publication Zimlive and has been charged with planning the protests. His sister was released on 30 July.

In the lead up to today’s planned protests, authorities have been beefing up security in main cities, including sealing off the Harare Central Business District, under the pretext of enforcing COVID-19 regulations.

“Zimbabwean authorities must stop using COVID-19 as a pretext for restricting human rights. Peaceful protest is not a crime, and the motivations for crushing this demonstration are plain to see,” said Muleya Mwananyanda.

“Zimbabweans must be allowed to freely exercise their human rights, including the rights to freedom of expression and peaceful assembly. The authorities must stop harassing, intimidating and arresting people who have done nothing more than peacefully express their opinions.”

The government launched a crackdown last week ahead of protests planned for today with the arrest of prominent journalist Hopewell Chin’ono and opposition leader Jacob Ngarivhume. While Chin’ono was arrested for “inciting public violence”, it appears that he was targeted for exposing allegations of corruption in the procurement of Personal Protective Equipment related to COVID-19.

Ngarivhume had called for a national peaceful protest against corruption, which eats away at people’s livelihoods and contributes to denial of human rights. Both Chin’ono and Ngarivhume remain in police custody and have been denied bailed on the grounds that they remain a risk to the peace of the country.